Clinical St Fergal’s back in the winners circle once again 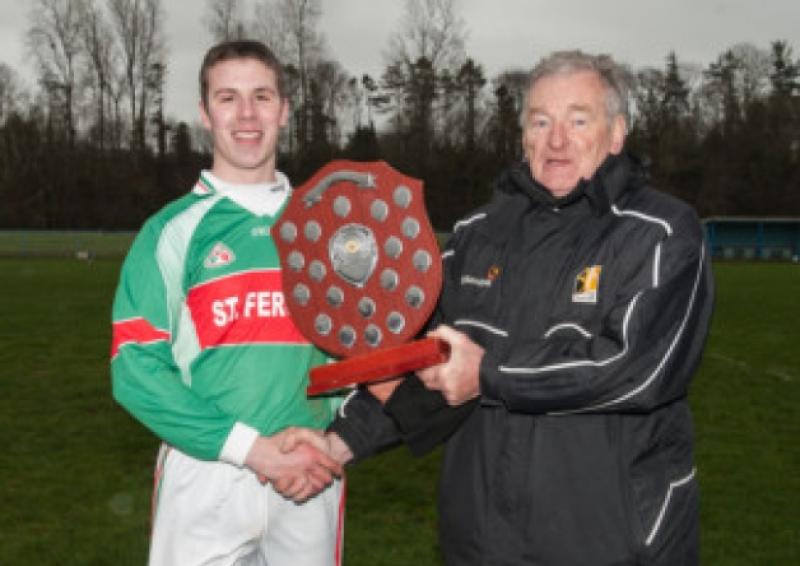 St Fergal’s College, Rathdowney put in a stellar first half performance against a gail force wind to pave the way for a twelve point victory over St Mary’s CBS, Enniscorthy to see themclaim the Leinster title in Thomastown on Saturday last.

St Fergal’s College, Rathdowney put in a stellar first half performance against a gail force wind to pave the way for a twelve point victory over St Mary’s CBS, Enniscorthy to see themclaim the Leinster title in Thomastown on Saturday last.

Having held Enniscorthy CBS to just four points in the opening half was a remarkable feat for St Fergal’s, never mind scoring five themselves. They withstood incredible pressure for the entire first half and maintained an unrivaled level of focus for the duration, and it’s no doubt their first half performance was the winning of the game.

Despite playing into the wind, St Fergal’s opened the scoring for the day after five minutes with Mark Kavanagh splitting the posts with a free from thirty metres to set the scoreboard in-motion. Kavanagh then followed up four minutes later with a superbly struck free into the increasingly strong wind from fifty-metres to give Fergal’s an early two pint lead.

While St Fergal’s had notched two points at this stage in the game, their Enniscorthy counterparts had already racked up six scoreable wides as they struggled to come to terms with wind that invaded the completely open Thomastown pitch.

It took the Wexford school until the fifteenth minute to open their account with midfielder, Paul Larrissy, converting a twenty-one metre free to halve the deficit. Seven minutes and three wides later, Enniscorthy CBS brought themselves on par with St Fergal’s at two points apiece thanks to Shane Lawlor’s close range free.

Now with just seven minutes remaining in the half, St Fergal’s went on the attack and notched two points - both from Mark Kavanagh. The Rathdowney-Errill clubman grabbed his first from play after twenty-three minutes having latched onto Stephen Bergin’s pin-point pass, before going on to convert a close range free to push St Fergal’s two points clear once again.

Enniscorthy CBS’ Conal Flood announced his arrival to the game with a huge, huge effort from seventy-metres three minutes before the break, but there was still time for Mark Kavanagh and Shane Lawlor to exchange frees to leave the half time score at five points to four in favour of the Laois men.

To come out of the first half leading by a point was a huge result in itself for St Fergal’s given the near gail force wind that stood in their way. That said, Enniscorthy CBS weren’t without their chances at they racked up a staggering eleven wides in the opening thirty minutes.

Now aided by the wind behind their backs, St Fergal’s restarted the second half on a high with Mark Kavanagh sending over his sixth point of the day early on, before Stephen Bergin broke the goal-drought eleven minutes into the second half with a well-taken goal to send Fergal’s five points in front.

Enniscorthy briefly interrupted the St Fergal’s scoring with an inevitable goal for the Wexford men. Forty-six minutes into the game Shane Lawlor lifted the green flag with a rifled shot across the face of goal that took a wicked deflection into the back of the net to cut the deficit to three points.

St Fergal’s pushed on and racked up 1-4 without reply thanks to points from Liam O’Connell (2), Colm Stapleton and Aidan Corby - with Corby on-hand to fire the goal too in a fast-paced five minutes of hurling.

Enniscorthy CBS closed out their account for the day five minutes from time with a pointed free from Lawlor, leaving St Fergal’s to grab 1-1 in the dying minutes. Mark Kavanagh converted his sixth free of the day with three minutes to go, before Robbie Phelan put the icing on the cake with St Fergal’s third goal of the game to seal the result and claim the Leinster title.