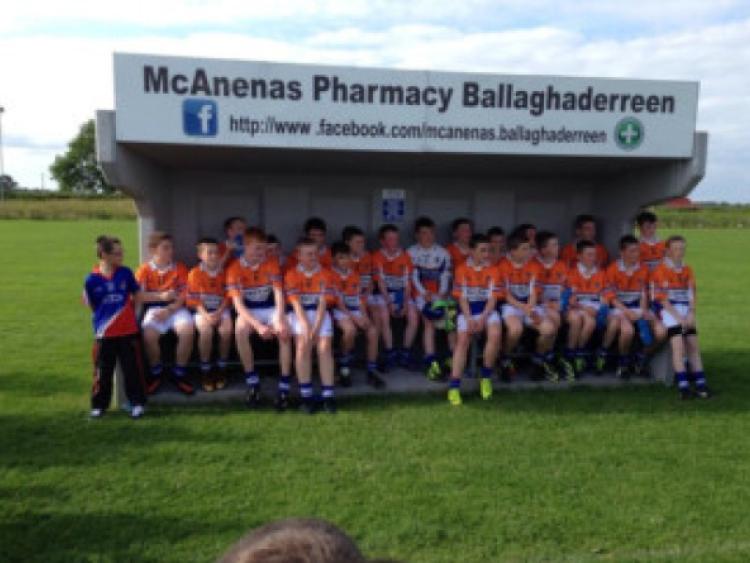 Portlaoise and St Paul’s both came close to winning Feile Football titles over the weekend but both were denied at the final hurdle.

Portlaoise and St Paul’s both came close to winning Feile Football titles over the weekend but both were denied at the final hurdle.

Portlaoise lost out by a point in their Division 2 decider against Ballymena while St Paul’s lost out to Killucan. Naomh Éamann were at Feile for the second weekend in a row after competing in the hurling the previous weekend and once again they made it through to a semi-final.

Portlaoise stormed through their division which also included Oran, Dunshauglin and Clan na nGael winning all three games and scoring 14-15 in the process.

That set up a quarter-final with Naomh Éanna where the Laois side once again were too strong for their opponents winning by 5-2 to 0-1 on Saturday in Ballintubber.

Their semi-final against Moycarkey-Borris was a closer game but Portlaoise still had eight points to spare recording a 3-4 to 1-2 victory.

The final against All Saints, Ballymena was played on Sunday afternoon and it was a close fought affair with little to chose between the sides. In the end however it was the Antrim side who edged the game by 1-7 to 2-2 denying Portlaoise another Feile title.

After competing in the Hurling Feile the previous weekend and reaching the Division 3 semi-final, Naomh Éamann were back on the road again for the Football Feile.

Drawn in Division 5, Group D, the Laois side topped their group with two wins and one draw from their three games. They opened with a win over Ballyhaunis by 3-4 to 1-5 and followed that up with a 2-3 to 1-2 win over Mayobridge. A draw in their final group game against Kiltoghert ensured they topped the group.

A quarter-final win over Warwickshire by 1-7 to 2-1 set up a semi-final against St John Mitchell’s and after a thrilling game, Naomh Éamann were unlucky to come out on the wrong side of the result by just a single point, 2-3 to 0-10.

St Paul’s travelled west to represent Laois in the Girls competition. Drawn in Division 2, they opened with an impressive 9-5 to 2-2 win over Naomh Faithleach. They lost out to Naomh Sheosamh Gort Loman in their second game but rounded off the group stages with another impressive win seeing off St Croan’s by 5-7 to 3-1

That set up a quarter-final with Padraig Pearses and after a high scoring encounter, St Paul’s advanced to the last four with a 6-4 to 5-2 victory.

The semi-final set up a showdown with Clann Eireann with St Paul’s once again coming out on top by 3-7 to 2-3.

The final was a midlands derby against Westmeath side Killucan and while St Paul’s gave it their all, they lost out in a close game by 3-4 to 2-1.