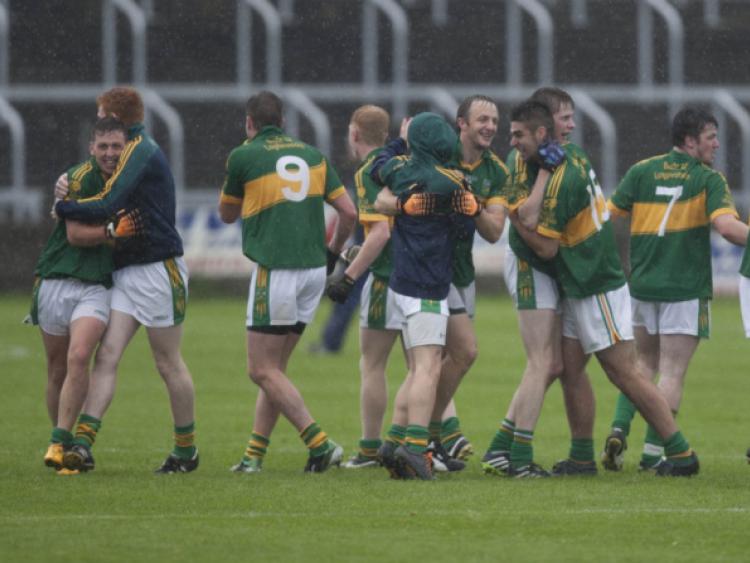 Despite being under the cosh for almost the entire second-half into the teeth of the wind and the rain in a dark and gloomy O’Moore Park, Ballylinan put in a determined rearguard action to grind out a one point win over St Joseph’s on Saturday evening.

Despite being under the cosh for almost the entire second-half into the teeth of the wind and the rain in a dark and gloomy O’Moore Park, Ballylinan put in a determined rearguard action to grind out a one point win over St Joseph’s on Saturday evening.

Six points in the first-half from Gary Walsh had helped Ballylinan to a 0-8 to 1-2 lead at the break and it was all hands to the pump in the second as they held on for the win.

They only scored three points in the second-half but in the end it was enough to get the better of St Joseph’s who missed a hatful of chances when the elements were in their favour. In the second-half alone, they hit the woodwork twice, kicked seven wides and dropped another series of shots short into the hands of Darren Burke. Despite dominating territory and possession, they only added 1-2 after the break which was a very poor return.

They were also stifled by some excellent defending from Ballylinan. Cathal Leonard was the linchpin of the defence that swarmed the man in possession and ran themselves into the ground right up to the final whistle.

Ballylinan had precious few chances in the second-half but they took the ones that came their way with Ciaran Farrell kicking the all important winner three minutes from time.

Going into the game, Division 2 also rans Ballylinan were the rank outsiders against a St Joseph’s side who only missed out on the Division 1 final after losing out to Portarkington after extra-time. There was no manifestation of that perceived gulf in class on the field as Ballylinan were more than a match for their top flight opponents right from the start.

With the heavens opening just as the game started, playing with the wind, Ballylinan made the perfect start with a point from Jamie Farrell straight from the throw in. Brian Brennan equalised for St Joseph’s almost immediately but Ballylinan were back in front after seven minutes with the first of seven points on the day from Gary Walsh.

Against the run of play, St Joseph’s took the lead when Colin Campion capitalised on a mistake in the Ballylinan defence to slot the ball past Darren Burke. A point from Ian Donnelly followed soon after and the favourites were in a strong position leading by 1-2 to 0-2 despite playing into the wind.

However they would not score for the remainder of the half while at the other end Gary Walsh took control of proceedings as Ballylinan built a 0-8 to 1-2 half-time lead. Walsh scored five of the six points, four from frees while Alan Farrell also chipped in with a point to leave Ballylinan three points to the good at the break.

Given the strength of the wind, that seemed like a very slender lead and it was wiped out within two minutes of the restart as Liam Kealy goaled for St Joseph’s to get them back on terms.

Gary Walsh edged Ballylinan back in front soon after but a ‘45 from Colin Campion again levelled the scores leaving St Joseph’s in a position to push on and win the game. The expected scores never materialised although Campion was unlucky not to get a second goal when his shot hit the post. St Joseph’s were camped in the Ballylinan half but they continued to miss chances while Ballylinan also broke up numerous attacking moves with some fine defending.

The sides exchanged points midway through the half with Alan Farrell and James Doyle exchanging frees. St Joseph’s continued to push forward but the woodwork again denied them a third goal when a flick from Jason Campion close to goal bounced clear off the crossbar.

Time and again, St Joseph’s had chances to get in front but they couldn’t find their range and with three minutes to go, on a rare break for Ballylinan, Ciaran Farrell did what the opposition couldn’t do at the other and slotted the ball over the bar.

Even then St Joseph’s had the chance to at least steal a draw but three more late wides summed up their day as Ballylinan celebrated a win that was a deserved reward for their efforts over the hour.