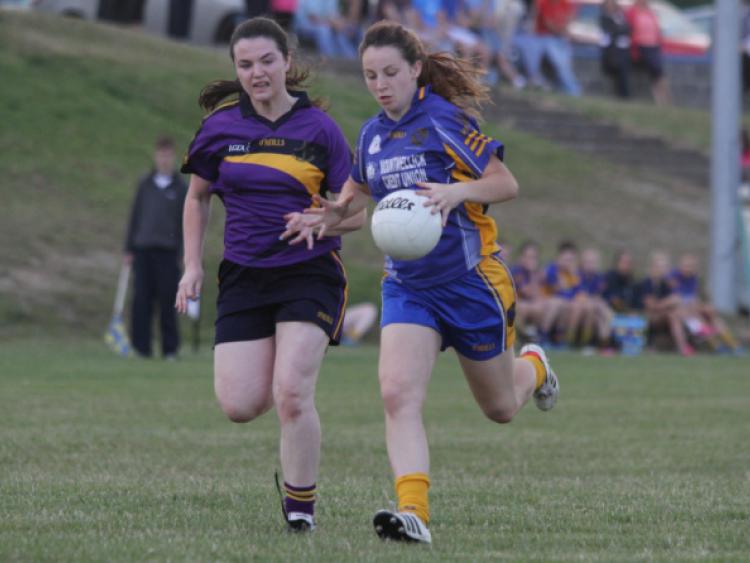 Both teams had recorded big wins over Portlaoise and Shanahoe in the previous rounds and the prospects were for a tight competitive contest that could go down to the wire.

In reality it turned out to be the exact opposite. It was largely one sided and lacking any championship fervour or atmosphere.

The tone of the game was set from the opening exchanges as the hosts laid down a marker as Ciara Burke and Meaghan Dunne found the net and Rosemarie Bermingham and Tracey Lawlor pointed. Two more goals from Lawlor and O’Sullivan sapped the game of any competitive edge and St Brigids struggled with the pace of the game.

Alice Malone, Anna Moore, Sarah McEvoy and Emily Moore provided some leadership as Brigids stopped the rot temporarily and Caoimhe Simms registered their first score after 18 minutes. Scores from Meaghan Dunne and Mary Keating finished the half leaving Sarsfields in a commanding position at the break leading by 5-9 to 0-2.

St Brigids started the second half with a brilliant goal by Simms who eventually found a way past Ciara O’Loughlin to signal a mini revival. They added another 1-5 before the end mainly through the twin threats of Simms and O’Shea but in general the McEvoy sisters, Jenny Alison and Emma, along with Amy Grehan allowed little scope for an upset.

In the middle of the field Olwyn Farrell was in excellent form for Sarsfields and along with Tracey Lawlor dominated their opposite numbers, Anna and Emily Moore.

At the other end the introduction of Laura-Marie Maher sounded the death knell for the visitors as the Laois player helped herself to a whopping 2-4 in the last 20 minutes.

The outcome of the game means that Sarsfields are in top spot in Group 1 and will meet the runners-up in Group 2 which is between St Conleths and Park-Ratheniska.

Despite the defeat, St Brigids end up in second place and will meet Timahoe in the other semi-final.