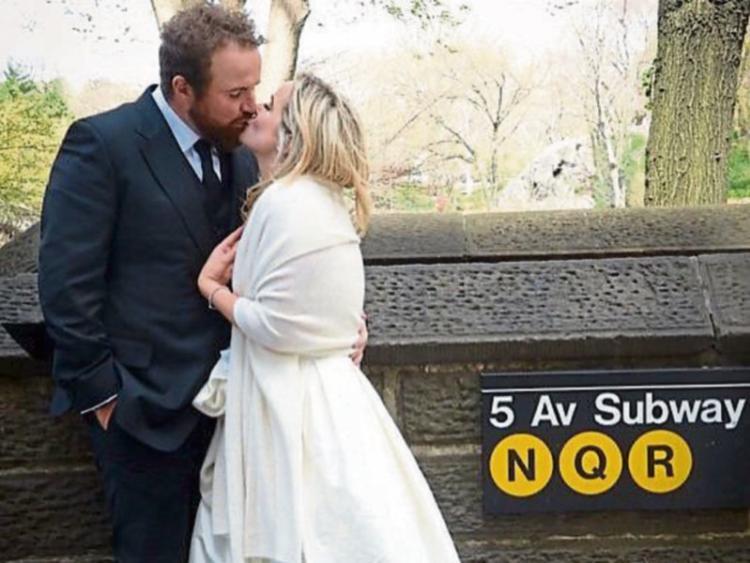 Back home in Laois, her community is delighted for the nurse, her parents William and Iris, and her five sisters and a brother who runs the family farm.

Her local rector at St Peter's Church in Clonenagh, Mountrath, Rev Canon Ian Poulton, is looking forward to greeting the newlyweds in church when they arrive home.

His text of congratulations to Wendy on her marriage, got the happy reply that she “was very excited about the whole thing”.

“It is a wonderful a way to round off a golf tournament,” said Rev Coulton, who had already met Clara golfer Shane Lowry after a church service.

Wendy attended Clonenagh NS in Mountrath, before going to Wesley School in Dublin.

Her mother is a Bennett from a well known family in nearby Carttown in Camross.

Retired county councillor Michael Lalor was among those in Camross to wish the couple well.

“The Bennets are all very nice people, a nice family, and we wish the couple well and the best of luck. Golfing might be the in thing here from now on,” he said .

Nurse Wendy had caddied for her Offaly fiancé at the par-3 contest ahead of the Masters at Augusta last week, when Lowry stunned with a hole-in-one on the 16th, followed by a birdie on the 18th.

The couple tied the knot in New York on their way home from Georgia.

They had got engaged in December 2014 in Dubai, and are together for the past five years, having first met on a social night out.

They have some honeymoon time off now, as Lowry has a break from tournament golf until the Wells Fargo Championship at Quail Hollow on May 5.

Wendy's two older sisters made Leinster Express headlines themselves in 2013, when Melissa Honner donated a life-saving kidney to her younger sister Alison, a Transplant Games gold and silvermedalist and broadcast journalist.

Alison was born with a congenital kidney condition, and underwent two previous transplants before the second failed in 2012 and she became extremely ill, needing to travel from home to Beaumont Hospital three times a week for hours of haemodialysis.

All the family got tested and teacher Melissa was the only match.

She immediately agreed to the operation, and later postponing her wedding to undergo it.

The sisters have since campaigned on behalf of the Irish Kidney Association to raise organ donor awareness.