Full steam ahead for Stradbally shed 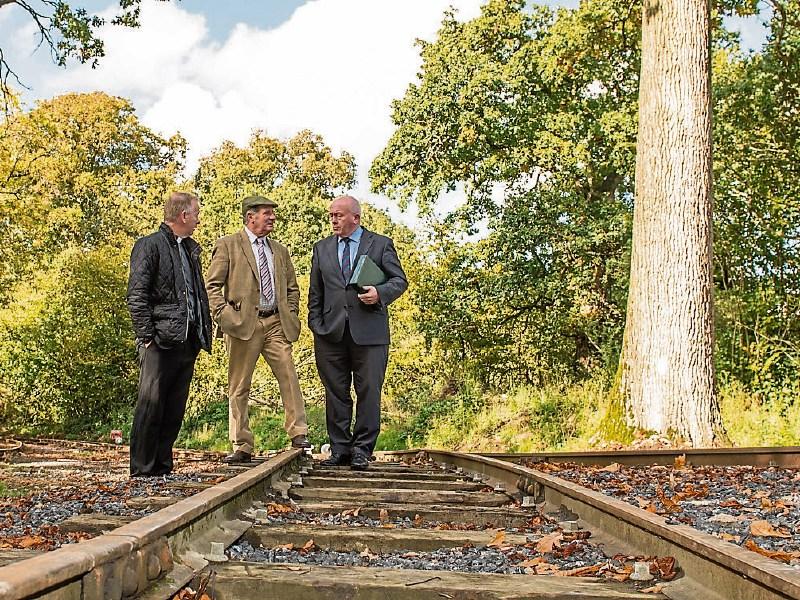 Emerging from a cathedral and steaming along a tennis racquet. Sounds implausible, but it happens in Stradbally—at least in the metaphorical sense.

The “cathedral” is the new Railway Works Shed attached to the Stradbally Woodland Express. The “tennis racquet” is the shape of the one kilometre railway track.

It was full steam ahead in Stradbally on Saturday as County Council Chairman Tom Mulhall officially opened the 200,000 euro Shed.

Declared track foreman Dick Brennan: “We don’t call this a shed. We call it a cathedral.” A Castlecomer man, he is a former employee of British Railways. So he knows what he’s talking about.

Following the snipping of the tape, a trolley trundled along the track into the shed. On the trolley was a box which, when opened, revealed sumptuous cake baked specially for the occasion by Helen McEvoy of the local Court Restaurant.

The honour of cutting the cake went to Ann Goodwin of Laois Leader. That organization was the major contributor towards the cost of the new facility. Carroll-O’Keeffe, Clonaslee, were the builders.

Then it was time to board the train headed by locomotive No 2, formerly owned by Bord Na Mona. Driving it was the youthful Tom Fogarty, from Prosperous, Co Kildare, who was attired in appropriate railway gear. “She’s a mind of her own,” he mused as the loco coughed coal smoke through the stately oak trees.

Like most, if not all, steam enthusiasts he regards such engines not as inanimate objects, but as living, breathing beings.

He and all the people at Stradbally Woodland Express are volunteers, doing the job for the love of it, offering trips to the public on all Bank Holidays from Easter to October and on other days as well.

After the first Stradbally Steam Rally in 1966, the Express began operating a few years later, first with a former Guinness Brewery loco on a one foot, ten inch gauge track. That loco is now in the local museum.

From 1970 onwards, a new three foot gauge track was laid in stages. Among the attendance on Saturday, were Vinnie Duffy and Christy Spencer who were there from the early days. A prime mover in the enterprise was Clifton Flewitt.

A surprise, perhaps, is the number of young people associated with the Express, lads like Mervin Grace and Alan Curran. On Saturday, they were Guard and fireman, respectively. And the Express is famed internationally—it has had more than 300,000 hits on YouTube.

Four locos—two former Bord Na Mona and two former ESB—are in the shed and all are badly in need of rebuilding. So there’s a busy time ahead.

A guest on Saturday was Adrian Cosby. Stradbally Woodland Express is on the Cosby estate. Present, too, was local Rector Rev Alec Purser. Helping to ensure that everyone was well fed and refreshed was Liam Buggy. His boss is Dick Dunne, who chairs the Stradbally Steam Rally Committee.

“I’m delighted that this day has come,” exclaimed local man Ken Graham at the official opening of the Stradbally Railway Works Shed on Saturday. He is President of the Irish Steam Preservation Society.

Stradbally, he said, had the longest operating heritage railway in Ireland and, he pointed, it was all done by volunteers.

And, continued Mr Graham, the Stradbally-based national steam rally and museum was going from strength to strength

He thanked everyone who had helped with the Shed project and made special mention of the late James McKeon, as he did of Christy and Darrin Moran who crafted the Market House plaque commemorating the first Stradbally Steam Rally in 1966.

County Council Chairman Tom Mulhall, in his address, recalled that Rally—he’d been there as a 12-year-old, he said. He paid tribute to everyone associated with the Stradbally Woodland Express.