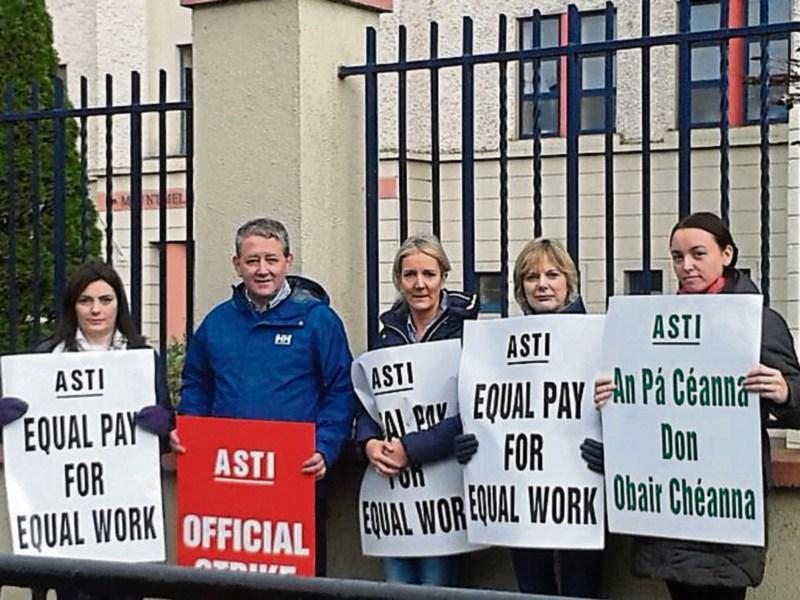 ASTI members on the picket line at Mountmellick Community School.

The ASTI's Laois understands that parents will be 'frustrated' by the looming industrial action that will close schools,  possibly, indefinitely after the mid-term break but he says teachers will not work for nothing.

Mr Eamon Dennehy, a teacher in Heywood College, near Abbeyleix also hit out at the Government for being willing to pay 'far more' to temporary teachers to keep schools open during the strike than it wants to pay to teachers to do it full time.

Association of Secondary School Teachers in Ireland will not be at work next Monday, November 7 but if their dispute over supervision and substitution payments is not settled by then there will be no pupils in classrooms.

Schools in Portlaoise, St Mary's CBS and Scoil Chríost Rí, have already written to pupils saying they will not open but it is understood that others will or have followed suit. One school, Mountrath Community School, advertised independently for supervisors, but it is not clear if they recruited. Other schools that closed as a result of the one day strike in October were: Mountmellick Community School, Heywood College, Coláiste Íosagáin Portarlington, Knockbeg College.

The schools cannot operate if teachers withdraw from supervision and substitution for which they claim they are not being properly paid.

ASTI representative Mr Eamon Dennehy said he was not sure what the various schools plan to do but he does not expect them to open.

"There are supposed to be talks but nothing has been done so far to stop it...Staff will show up for work at schools that have been closed by the various boards of managements," he said.

He said teachers were not being paid for supervision and this was directed by the Department of Education.

"It is a dispute and a trade union cannot tell its members to work for nothing," he said. He added that the Government is willing to pay "far more" to temporary supervisors in schools during the dispute than it will pay to teachers.

Mr Dennehy is a parent himself and could "absolutely see" that parents would be frustrated.

Apart from the impact of lack of supervision on Monday, schools will close on Tuesday, November 8 when pickets will be mounted at schools as part of a day of strike action.