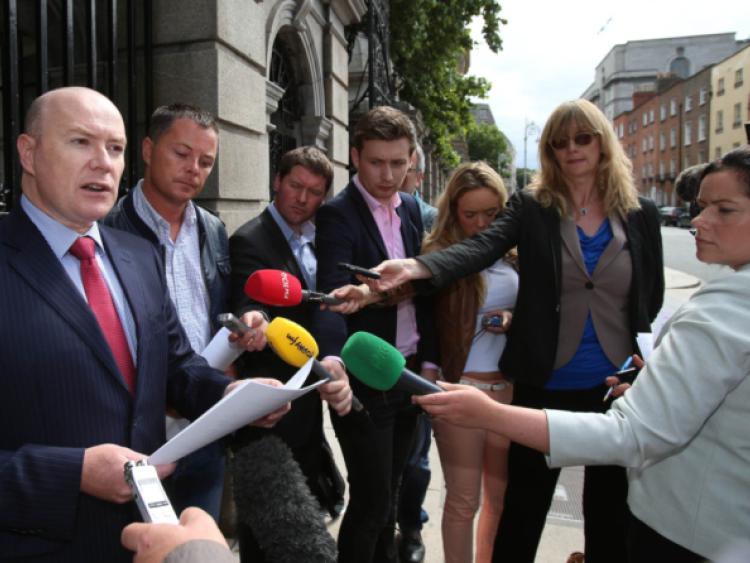 Austin and Oliver Stack (left to right), sons of Brian Stack, the only prison officer to be assassinated in the Republic of Ireland, make a statement following a meeting with SF leader in 2013

Portlaoise man Austin Stack, the son of murdered Chief Prison Officer, Brian Stack, has confirmed he has been shown an e-mail which Gerry Adams sent to the Garda Commissioner in which Deputy Adams names three current Sinn Féin politicians as suspects in his father’s murder.

The Irish Independent has reported that the e-mail was sent by Deputy Adams’ secretary from her Oireachtas e-mail account on 22 February 2016 and was signed Gerry Adams.

In the mail it alleged that the Sinn Féin leader names four suspects, three of whom are current SF politicians, and alleges that he received these names from Austin Stack. It is claimed in the mail that Deputy Adams alleges that Mr Stack received his information from the Gardaí and journalists.

Mr Stack says he was made aware of the e-mail late last week.

“It is beyond incredible that we have a political leader naming three senior colleagues as murder suspects. In naming three of his Party colleagues as suspects in my Dad’s murder it has become abundantly clear that Adams and his colleagues have very serious questions to answer in relation to a live murder inquiry.

"Why Adams and his organisation have applied different standards to themselves by not suspending these individuals pending the outcome of the murder inquiry. This is what would happen in any other organisation,” he says.

In addressing the issue as to where Deputy Adams got his information from, Mr Stack said: “It certainly was not from me and for him to say so is untruthful in the extreme”.

Mr Stack said he did not reveal any information that he had to Deputy Adams despite him asking me him to do so at meetings in 2013. He said his brother Oliver was present at meetings.

Mr Stack said he continues to campaign for a victim-centred truth recovery process but he says the Sinn Féin leader has clearly shown that he is not interested in delivering truth or in reconciling with victims”.

"Victims are the real peacemakers as we are the ones who have suffered most and gained least from the peace process, however we are still prepared to do our bit for reconciliation on our Island if we have access to the truth,” he said.

Brian Stack was shot near the National Stadium in March 1983. He died some months later as a result of the injuries sustained.