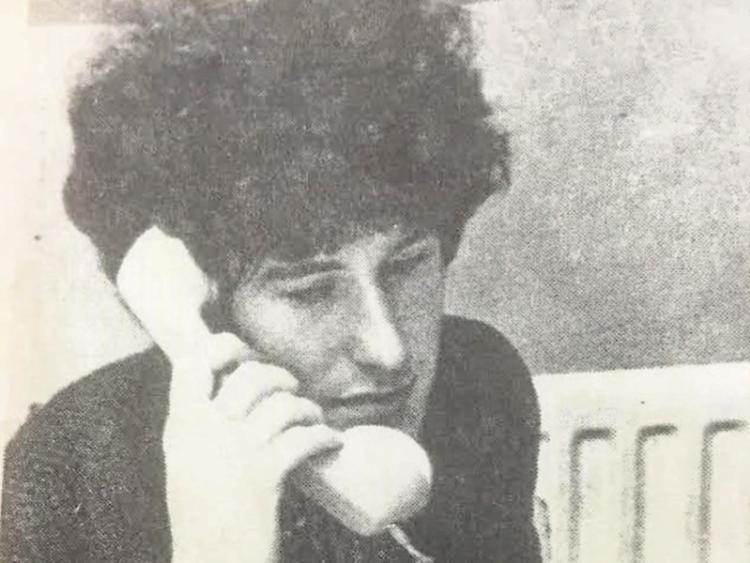 Seamus Dunne on the job with the Leinster Express

October 10, 1970, was the date The Leinster Express shrunk—from a broadsheet to a tabloid.

It was one of the first provincial newspapers in the country to make the move and, though not fully realized at the time, it was the start of a process that would eventually - with the advent of computers - destroy the traditional printing trade.

Web-offset was the technical term of the method used to produce the then new tabloid Leinster.

Pictures were still in black and white but the masthead was in colour.

The printers rose to the challenge, as did the editorial staff whose average age was little more than 20.

Of course, the ladies in the advertising department also did their part.

The Leinster Express in the late 1960s….primitive in some ways.

For example, when reporters wanted to make a phone call, they had to sign a chit for sixpence in the advertising office, and then use the payphone in the hallway.

Mostly, though, the reporters had to rely on legwork because very few people owned telephones and those who wanted them had a long wait. Mobiles were in the distant future.

Proprietors of the Leinster were Freddy and Rose Townsend.

Freddy Snr was a Linotype operator and beside his machine he had a press full of tinned food and other supplies, apparently in anticipation of nuclear war.

Rose was very much involved in the business, not that the staff were very appreciative of her efforts.

In the early to mid-1960s , and maybe a bit earlier, the editor was the famous ‘Micky Beag’ McCarthy.

The story is told that when he introduced himself to Lar Lynch, who had a pub in Market Square within a few yards of the Leinster office, the latter replied: “God between us and all harm. We all have our afflictions!”

Lar was a Fianna Fail County Councillor and sometimes he would stop talking to Leinster journalists, seemingly because he was displeased with their reports of his contributions to meetings.

Adjacent to Lar’s pub was Peter Keegan’s premises which, so to speak, was an alternative office for some newspaper hacks.

Peter’s opinions were worth seeking and he had a wry sense of humour.

Let’s just say, if a reporter got a story from them he or she would, to say the least, be wise to double and maybe treble check the facts.

Elsewhere, the ‘60s may have been swinging, but in Portlaoise and in provincial Ireland generally, society was still fairly rigid.

Shibboleths, there were, that you breached at your peril.

Priests were above criticism, certainly in print, as were people, often professionals, who regarded themselves as being superior to the common herd.

To be fair, though, perhaps the most progressive person in Portlaoise at that period was a priest, Fr William O’Mahony, CC.

The Leinster Express gave prominence to a weekly column by Timahoe man Fr Simon O’Byrne who was dubbed “The Teenager’s Priest.” Teens had had no say in conferring the title.

“Pornography, Fornication and Drug-Pushing” was the heading of his article in the first tabloid Leinster.

God knows what poor Fr Simon would have to say of the world now.

Dan Carmody, who went on to better thing with the Irish Press and later returned to head the PMPA-owned Leinster Express, was editor in the mid- to late 1960s.

Sean Ryan, a Dubliner, also filled the chair around that time.

He transferred to Independent Newspapers and became an authoritative writer on Irish soccer.

On the editorial staff in 1970 were Brendan Burke, from Ballyfermot in Dublin, Seamus Dunne and photographer Tony Dunne. The latter two were locals.

Brenda Marum was in charge of accounts and Mary Seale looked after advertising.

In the dispatch section was Christina Whelan, while Paddy Whelan, no relation, delivered the newspaper to various locations in Laois and Offaly.

The price of The Leinster Express 46 years ago was 10 old pennies.

The currency was still in pounds, shillings and pence. The front page headline on the first tabloid was “Action Being Taken On O’Moore Place.”

Also on the front page was a picture of the ubiquitous Oliver J Flanagan.

Showbands were still to the fore, as was evident in the advertising pages.

The Mighty Barrow Boys were scheduled for the Slieve Bloom Ballroom in Borris-in-Ossory, while The Capri Showband was booked for Portlaoise Macra Hall.

Turning to sport, Paddy Dowling reported that Clonad had regained the senior hurling title, beating Clonaslee on a 2-9 to 3-3 scoreline.

Among those featured In pictures were BLE’s new Laois Secretary, Jimmy Finn, and Treasurer Pat Malone, the Post Office group that participated in the Tops of the Parish competition in St Mary’s Hall, Portlaoise, and Charlie Alley, Lowhill, at the Ballinakill old folks’ party.

Cunningham & Sons, Portlaoise and Tullamore, had a used car sale.

Within a few short years, the Leinster would have vacated Coote Street for a new premises on Dublin Road.

Now, going full circle, it is back in town.

One could say, back home.