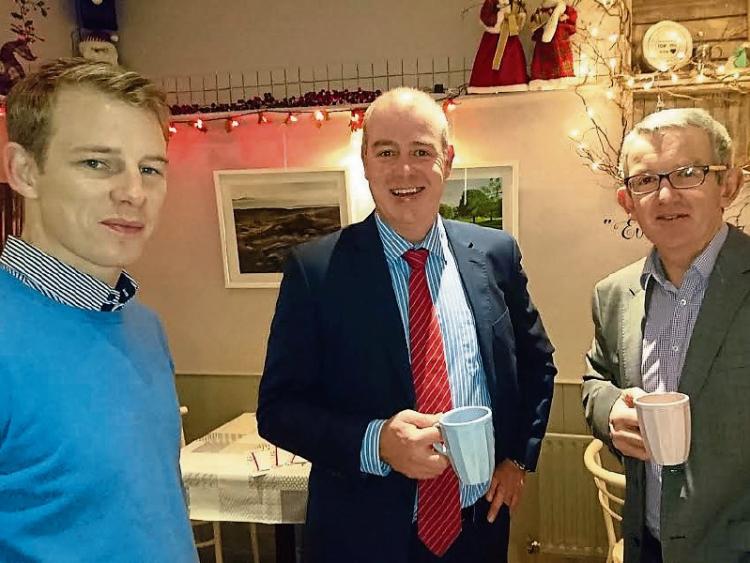 There was a positive seasonal pre-Christmas atmosphere at the launch of Communicate Ireland at The Pantry, Main Street, Portlaoise last week.

It was one for the early birds with the business-like launch timed for 8am to facilitate people heading to work, their shops or the school run. And it worked.

There was a steady turnout throughout the morning for the event billed as a chance to chat with Christmas cheer; mingling with mince pies; while putting the best foot forward for Laois next year.

Among the ideas to germinate were suggestions to re-organise a countywide and representative Laois Chamber of Commerce.

This would provide an important platform to promote the best the county has to offer and a voice for the Laois business sector.

It was also seen as something that would complement the newly revamped Laois Tourism Association and could work well with a revitalised Laois Association.

Another proposal floated was the revival of the Portlaoise Jazz Festival, which for years was such a big hit with the public and a big draw for visitors.

John Drennan, founding director of Communicate Ireland explained that the company was there to provide a wide range of PR and public affairs services to help individuals, businesses, companies, communities and State agencies make things happen and to get their message across, in what was often the minefield of the modern media landscape.

He said that while Communicate Ireland was a new public relations company, that between himself and his colleague John Whelan, they had a combined media experience spanning over 50 years.

He said they wanted to be a useful resource to the community and commercial sector.

John Whelan joked that he preferred if his counterpart had not reminded everyone of his age, but that they were there to provide a service in the community and to an area in which they both lived and were committed.

“Laois has so much to offer. We have the best luxury hotel in the world in Ballyfin; the best music festival in Europe in Stradbally; the most beautiful scenic walks in Ireland in the Slieve Blooms; world class amenities like Emo Court which are free to the public; community events like the Durrow Scarecrow Festival which are second to none, but sometimes we are our own worse critics.

“There is an amazing amount of good energy and great expertise available to us here in Laois, we just have to join the dots, pull together and learn how to make the most of it.

“We should be singing our own praises more.

“If we don’t get up and do it, no one else will,” said John Whelan, adding, “Communicate Ireland is here to help, help make things happen and to get that message out there.”