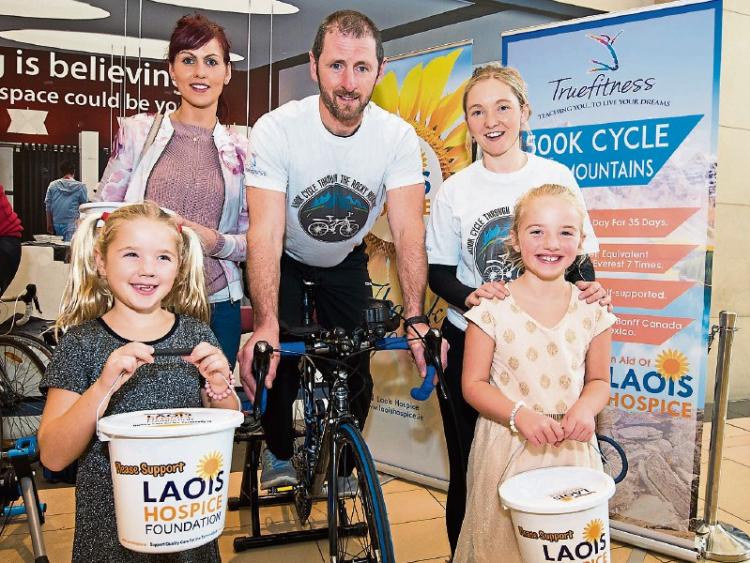 A Portarlington fitness trainer is preparing to cycle 4,500km along the Rocky Mountains, to raise at least €10,000 for Laois Hospice.

John Bolton, 49, will tackle 150km of mountain trails for 15 hours a day for 35 days, from Canada down to the Mexican border, to complete his epic solo journey.

Last Saturday he launched his cycle in Laois Shopping Centre by doing an 8 hour stationary cycle with volunteers, while collecting money for Laois Hospice.

Setting off next June 10 from Banff, Canada, he will face extreme temperatures from freezing snow and thunder in the mountains, to a scalding 40 degrees in New Mexico.

“Hypothermia is the biggest danger,” he said, adding that the mental challenge will be “hugely tough”.

“I am experienced in ultra endurance, but it will be so isolated,” he said.

He will scale altitudes of up to 3,500 metres, three and half times the height of Ireland’s tallest mountain, Carrauntoohil.

He is training six days a week to prepare.

“I am doing strength training and flexibility as well as bike work. Before I go I will do a weekend of three 15 hours cycles, fully loaded with my food, water and tent as I have to carry everything I need, I won’t have any support with me,” he said.

John will have a satellite phone to keep in contact, as 90 percent of the mountains will have no phone signal.

He will update a blog and buy supplies when he arrives in towns every few days.

He is excited to get going.

“It will be an incredible experience, something I will remember for the rest of my life,” he said.

His bike is being hand built by friends in Portarlington, customised for the tough job ahead.

John is no stranger to setting himself tough challenges in aid of Laois Hospice.

“I have raised about €90,000 in the past few years. In 2014 I kayaked 1600km around Ireland with Brian Cooper, and we also cycled 2,000 km around Ireland. Laois Hospice is such a good charity, they do tremendous work. It should be government funded but unfortunately it’s not,” he said.

“They always tell me that, but they always support me, I’ve a very understanding wife,” he said.

Online donations can be made via a PayPal link on www.laoishospice.ie, with a request to reference Rocky Mountain Cycle when making the payment.