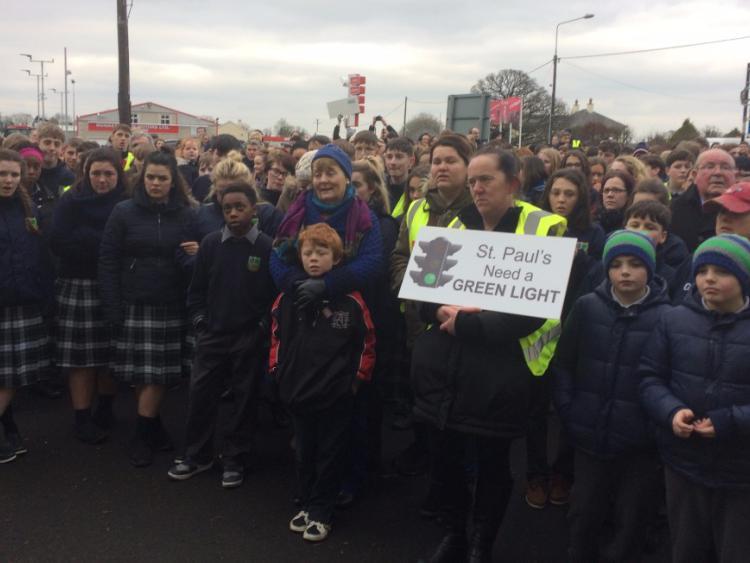 The Department of Education has confirmed that it will pay the estimated €400,000 costs for the installation of new traffic lights and control measures at the proposed new secondary school for Monasterevin.

An awareness march was held this afternoon from St Paul's Secondary school in Monasterevin to the Gate Lodge to highlight spiraling costs for the long awaited new school.

Shouts of "what do we want? - a new school, when do we want it?, now" were heard as campaigners marched through the streets in support of St Paul's new secondary school, whcih has been in the pipeline now for 16 years.

A public meeting was held once everyone had gathered at the gate lodge. Speaker and chairman of the committee, Aidan Mahon said that the great turnout showed the plight of the new school and the need for it to be built as soon as possible.

“Two generations of secondary school children have had to endure the sub standards or our current school building,” he said.

“We are a proud and caring community who want a decent place in which our children are educated.”

He explained that the site for the new school at Moore Abbey, which was identified by the Department of Education and KCC as the preferred site since 2008, has seen a number of delays including the negotiation and purchase of the site, road access and sewerage and drain works at a cost of €700,000.

“Lastly the impediment of the construction of traffic control systems and pedestrian safety provisions have developed from our planning application will cause a further dealy at an estimated cost of €400,000. These have been described by our officials as abnormal costs.”

The latest costs for traffic management was described as the "straw which broke the camel's back" and what brought everyone "here today".

However those in attendance were then informed that the Department of Education will pay for the cost of the installation of the lights and will not send an appeal to An Bord Pleanala.

“This is indeed good news. We hope that this committment will be held to and no further delay will be brought on our new school. We hold KCC and the Department accountable. We are here today to say enough is enough, to tell the Department of Education and KCC to do the right thing by our children. We have waited too long. Our existing secondary school is slowly falling in around us. We are not angry or frustrated, we are desperate.”

A meeting scheduled for next Monday night has since been cancelled in the wake of the news that the Department will foot the traffic costs.