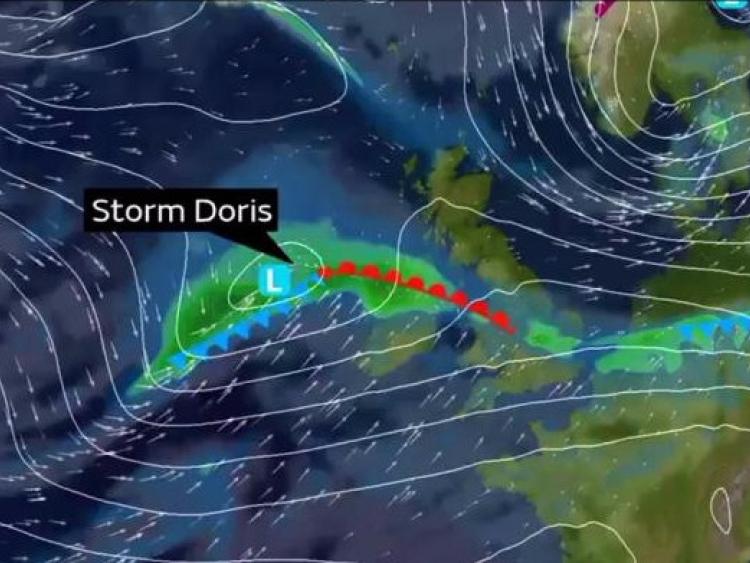 Met Éireann has issued national weather warnings for storm force biting cold winds and heavy rain ahead of the arrival of Storm Doris - the first big storm to sweep across the Atlantic in 2017.

While Laois is not specifically named in Status Orange Warning for wind, the second highest weather alert, the national forecaster predicts storm force winds to sweep through neighbouring Kildare.

Commuters heading the capital for work or other reasons in the morning should be careful making their journeys as Dublin is also subject to the same alert. Louth, Wexford, Wicklow and Meath are all expected to be hit by fierce winds.

The warning is in force Wednesday night and early Thursday morning. Northwest winds of mean winds of 70 to 80 km/h giving gusts up to 110 are possible.

Met Éirean says the alert is in force from 5am to 9am on Thursday, February 23.

Meanwhile, a Status Yellow wind warning is in force for the rest of the country. Winds will increase to mean speeds of 45 to 65 km/h with peak gusts in exposed sites of 90 to 110 km/h. Southwesterly gradually veering northwesterly overnight.

This warning is valid from just after midnight to noon on Thursday, February 23.

There is also a Status Yellow rainfall warning in place for counties Cavan, Monaghan, Donegal, Galway, Leitrim, Mayo and Sligo where 25 to 50mm of rain is forecast.

Apart from the wind and rain, Thursday is set to be a cold day. The strong winds will moderate through the afternoon and evening and the showers will become more scattered. Top temperatures only 6 to 9 C., and feeling even colder due to wind chill.

Thursday night will be cold and mostly dry, with clear spells, but there will be further scattered showers along western and northern coasts, some possibly wintry, mainly over high ground.

While no storm is forecast, wet and windy returns on Saturday at first with persistent and locally heavy rain spreading eastwards in the morning, with fresh to strong and gusty southerly winds.

Brighter conditions, with sunny spells and just a few scattered showers, will follow from the Atlantic and winds will ease a little as they veer westerly in direction.  Another spell of rain will cross the country from the Atlantic, with fresh to strong southerly winds on Sunday but to contrast frost is forecast on Sunday night also.

Early indications suggest that the early days of next week will be cold, with bright spells and showers, some of them heavy, with a risk of hail and thunder, especially in coastal areas. There is a high risk of frost at night.