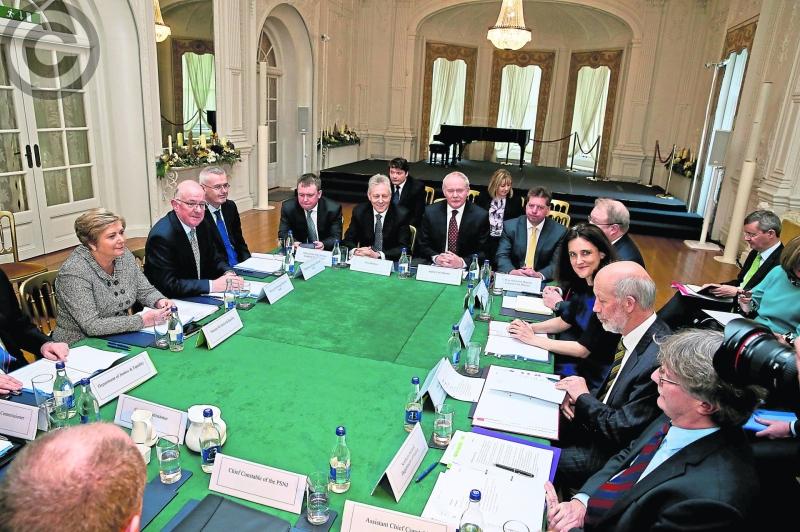 Charlie Flanagan and Martin McGuiness were among those at a trilateral meeting between the Irish and British Governments and the Northern Ireland Executive . Pic Maxwells

The legacy left by the late Martin McGuinness will inspire a generation of leaders according to Laois TD and Minister for Foreign Affairs and Trade, Charlie Flanagan TD as he extended his symathies the Derry native who died last night.

"Martin and I come from very different political traditions. However, in his embrace of the politics of peace, he made an immense personal contribution to building and consolidating peace on this island.

"His own personal journey from militant republicanism to deputy First Minister in a power-sharing administration with unionism helped to map the road to the Good Friday Agreement and its vision of partnership and reconciliation.

"In the past three years, I had the opportunity to work closely with Martin McGuinness and saw at first hand his many qualities. Martin’s generosity of spirit; his courageous leadership; and his ability to stretch himself in the pursuit of political stability inspired many others to do the same. He led with patience, with courtesy, and with a willingness to see and acknowledge the goodwill in others – even if those people were far removed from his own republican tradition.

"He did so despite being exposed to political criticism and personal risk. This legacy of leadership will no doubt inspire the next generation of leaders in Northern Ireland," said the Laois TD.

Minister Flanagan said Mr McGuiness was deeply rooted in Derry, with great affection for its people, its places and its sporting traditions.

"But above all it was his family that was at the centre of Martin’s life. For Bernie, his children and grandchildren, Martin’s untimely loss is very difficult to bear and they are in all our thoughts at this very sad time.

"My deepest sympathies are with his wife Bernie and his family at this very sad time," said Minister Flanagn.