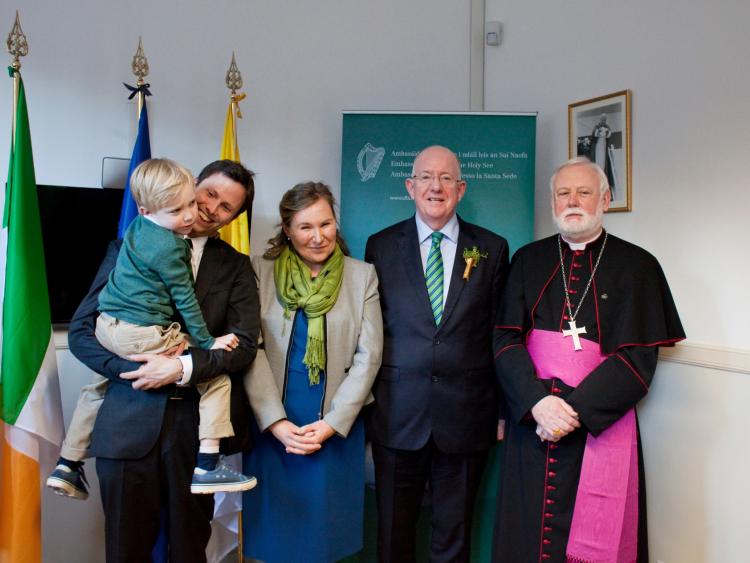 During his trip to Italy as part of the St Patrick’s Day Programme, Laois TD and Minister for Foreign Affairs and Trade, Charlie Flanagan officially opened the new Irish Chancery to the Holy See.

Speaking at the event, Minister Flanagan said Ireland's Embassy network is a vital asset for a small country.

"Each of our Embassies has a task as different as the countries and organisations to which they are accredited. That is perhaps particularly evident in the case of the Embassy of Ireland to the Holy See.

“The Holy See stands at the centre of a global faith community of well over a billion people. Pope Francis is a voice unlike any other. He has used that voice fearlessly in challenging the world to vindicate human dignity and human rights, eradicate poverty and hunger, tackle climate change, end conflicts, support sustainable development and to stand up for the values we all hold.

Concluding Minister Flanagan stated that "like all old friends", Ireland and the Holy See have some different perspectives. That is normal in a bilateral relationship.

"At times, we will have difficult conversations. But we will also have many fruitful conversations about our shared values. Fundamentally we each believe we have a responsibility to work towards a world that is just, fair, safe and sustainable,” he said.

Minister Flanagan's predecessor announced in 2012 that the embassy was closed but this was reversed two years later when it was confirmed that a scaled-back mission would open.

Minister Flanagan's father Oliver J, was member of the Catholic fraternal organisation the Knights of Saint Columbanus, and in 1978 was conferred a Knight of the Order of St. Gregory the Great by Pope John Paul I, given in Rome on September1978.