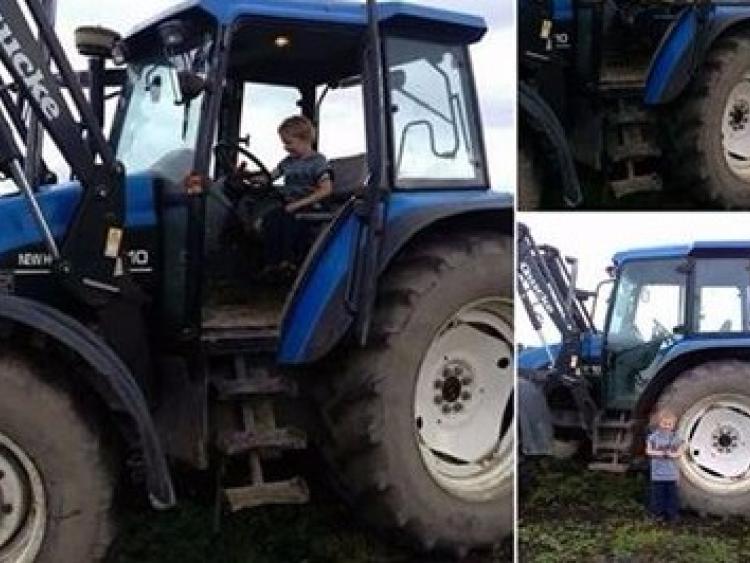 A Laois farmer is extremely grateful to people far and wide after recovering a tractor stolen from his home near Camross.

The tractor was found undamaged but hidden in a field near to its last sighting between Coolrain and Camross on Sunday morning.

Joe Hargroves is grateful for all the help given to him in trying to find the tractor, by local people and the appeals for help through media. He said there was 'no queston' but the thieves were planning to return to collect the blue New Holland tractor worth an estimated €30,000.

He is convinced it was low on diesel when taken and he is convinced this is why they did not drive further away and partly contributed to is recovery before they came back.

“They must have ran out of diesel,” he said.

However, a silver coloured Hawk model power washer that was attached to the PTO power shaft at the back of the tractor was taken as was the equipment that attaches it to the tractor.

The combined cost of these items is nearly €1,000 but it is a long way short of the loss he could have suffered.
Joe uses the tractor, which is worth €30,000, every day.

Garda forensics have been out to his farm to take fingerprints from the vehicle which was back at work by Monday afternoon.

The tractor was stolen at around 10pm last Thursday night, April 27. Joe was working with two other men cleaning his sheds and farmyard ahead of a farm inspection.

Instead of having dinner in the house with the men as he would usually have done after work, Joe went with the two men to a local takeaway because it was late. Soon after he left, his wife heard their dog barking.

"She locked the back door and went to the front of the house and saw the tractor heading out the lane".

Joe told the Leinster Express that, whoever took his blue New Holland TS 110 model it "must have been" watching and waiting.

There were no other sightings until 11pm on Sunday by a neigbouring farmer who was out tending stock.