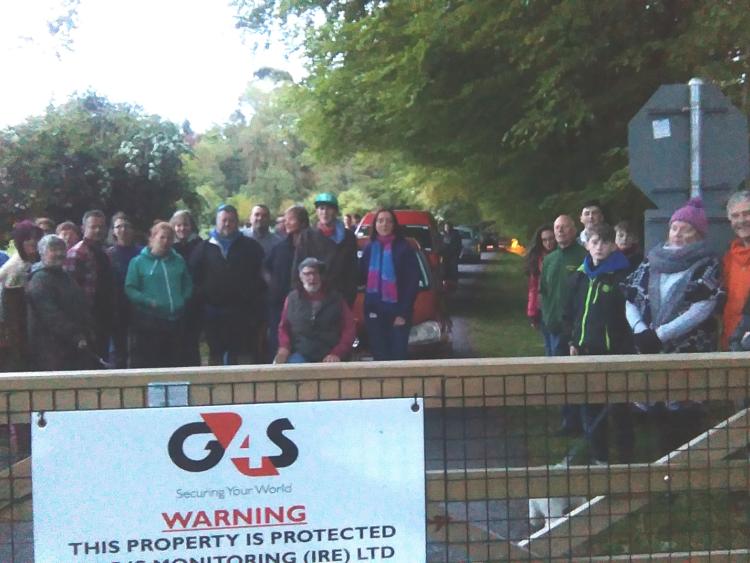 About 40 people including a wheelchair bound person were locked into the grounds of Emo Court in Laois for over an hour last Sunday night.

The group was attending a 'peaceful picnic protest' organised by young Emo resident Jody Mulhall, to highlight local upset at the shortened opening times of the grounds to the public. See more here.

With the recent announcement by Minister Charlie Flanagan that "the entrance road to Emo court is closed a half an hour before closing times and the exit road remains open after these times", it was understood that the exit would stay open later than the 9pm closing time.

However at 9.05pm, a security man working for the Office of Public Works, shut the gate without speaking to the group peacefully congregated in the grassy carpark, leaving them and 16 cars locked in.

"We were all under the impression that the gates would be left open after these hours, no-one came over to tell us. It was handled badly, to leave us so long was ridiculous," she said.

After a call to the security firm and another call to Portlaoise Gardaí who in turn contacted the security firm, an employee returned over an hour later, after darkness had fallen, to unlock the gate and allow the 16 waiting cars to leave, at 10.15pm.

Jody who is on the ASD spectrum, had arranged the event on his own to mark his 21st birthday, such is his love of walking in the grounds. About 70 friends and supporters had earlier enjoyed tea and a birthday cake in the shape of Emo Court.

Among them was Emo resident Kathleen Burke who has walked every morning in the grounds for the past 50 years. During the event, she told the Leinster Express why she was there.

"I walk around the edge, I don't come near the house at all, but now it's completely guarded up with fences I can't even climb over, I'm 74 years of age, and I've tried everybody. I go to mass every morning at 8 o'clock and come here after. I've brought my grandkids down that walk, and my kids down, I don't think it should be closed at all, all I want is a stile or a little opening. I'm here to protest in earnest with Louise, I'm so angry about this," she had said.

Despite being locked in, the group, including many members of Mountmellick Macra where Jody is a member, stayed calm, with Jody bidding everyone farewell and thanks as they drove out of the gate.