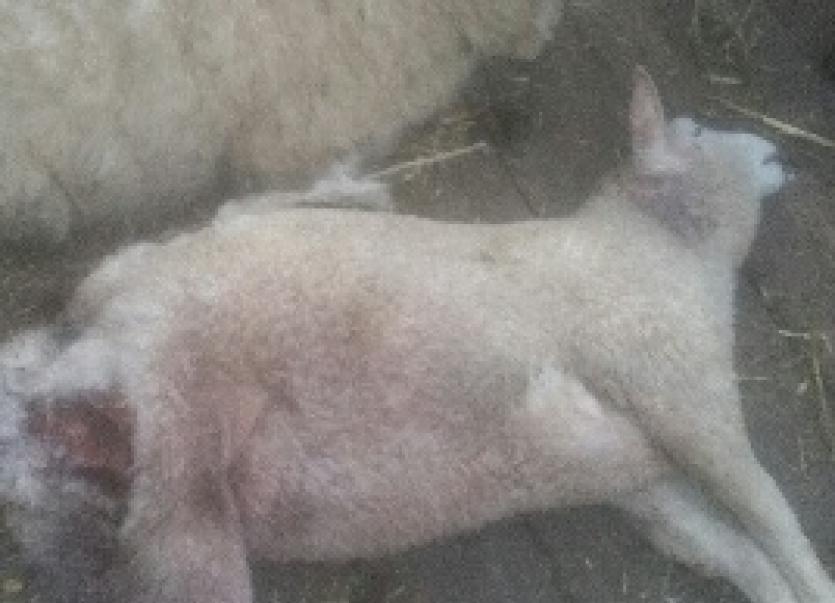 A spate of savage dog attacks on sheep flocks has left farmers in the Mountrath and Camross areas reeling, as they count the financial and personal cost of the destruction.

The most recent attack on Damian Delaney's farm at Clonin, Mountrath took place last Saturday night and left three sheep dead. It was the second onslaught which Damian's flock suffered in the past three weeks.

A dog attack on Wednesday night a fortnight ago, left six animals dead - two ewes and four lambs. Three of the animals had to be put down due to their horrific injuries.

"To my knowledge two dogs are doing this," said Damian. "We are looking out for a black Labrador and a terrier.

"This is an ongoing problem in this area for myself and other farmers. The scale of the problem is so bad that one farmer decided to get out of sheep altogether. This woman had her sheep on an out farm and she did not know what she would be facing every morning she went out to it.

"I myself work full time off the farm. I'm 19 and I put a lot of work and savings into getting a flock up and running. It's hard going at the best of times, but when you are faced with this devastation, it's heartbreaking.

"The owners of these dogs must know what is going on. They have to be going home covered in blood. People need to lock their dogs up at night."

Joe Burke, Chairman of Laois IFA Sheep Committee issued a stark warning to all dog owners in the county that they are fully responsible for ensuring that their pets are under control at all times.

They are liable for any losses as a result of dog attacks, with serious financial and legal consequences. He said farmers have a right to protect their sheep flock and can shoot a dog worrying, or about to worry their flock

Statistics collated by IFA indicate that the problem of dog attacks on sheep may be in the order of 300 to 400 attacks per annum, with 3,000 to 4,000 sheep injured and killed. Data on dog attacks gathered by the IFA shows an average of 11 sheep killed or injured per attack.

Joe Burke restated that marauding dogs can inflict horrendous damage on a sheep flock. "A number of dog attacks have been highlighted in recent weeks across the county, where major financial losses have been incurred. In the last week there was  very severe cases in the Camross and Mountrath area.

"Unfortunately, I am taking calls on a frequent basis from sheep farmers around the county who have suffered attacks. There are far too many dog owners not taking the responsibility that goes with owning a pet. Dog owners have an obligation to have their dog under control at all times."

IFA has a Protocol to help farmers who encounter a dog attack on their sheep flock. It is an easy-to-follow, 10-point Plan of Action covering what a farmer should do following a dog attack or sheep kill.

"Based on the feedback IFA gets from farmers who have had to deal with a dog attack on their flock, one of the biggest problems is the lack of information on what they should do, who they should contact and where can they get help."

Click on the below link for theIFA Protocol for Farmers on Sheep Kills by Dogs: