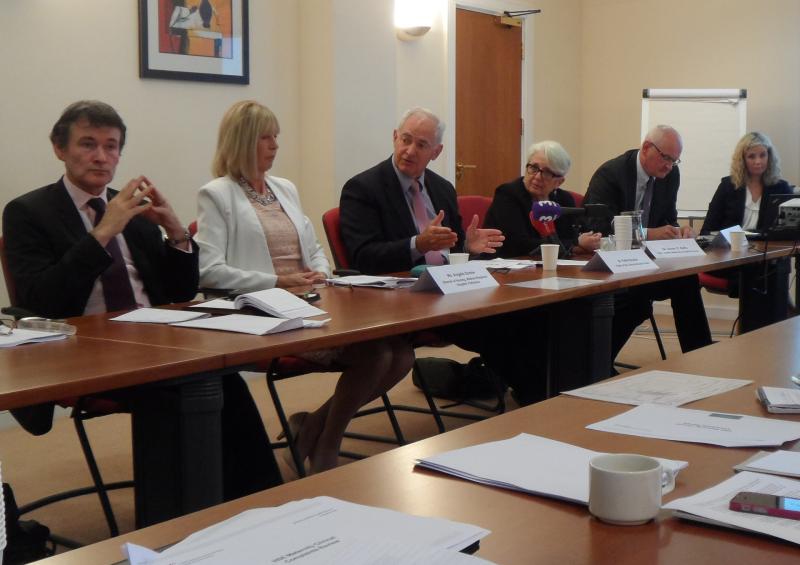 Two of the country's leading maternity services doctors have stood over safety of services for women and babies at the Midlands Regional Hospital Portlaoise.

"Portlaoise Hospital is as safe as any hospital in the country to have a baby in," stated Dr Peter Boylan at the publication of the HSE's Maternity Clinical Complaints Review which was mainly concerned with Portlaoise.

Dr Boylan, a consultant obstetrician and gynaecologist, is a former master of the National Maternity Hospital in Dublin.

"The staff in Portlaoise deserve full support and they are delivering some of the best results in Ireland.

"Portlaoise has suffered reputational damage, but this can be restored," said Dr Boylan who was a member of the Review team. "It will be a slow process, but I would encourage people to use the service."

The former master of the Rotunda Hospital Dr Peter McKenna is the Clinical Director of the new National Women and Infants’ Health Programme. He said one of the most important questions to be asked as a result of the review is weather the services is now safe.

He said it is within the statistically acceptable range for national perinatal mortality as are all maternity units in Ireland.

"Real improvements at the Midland Regional Hospital Portlaoise have been made," states Dr Susan O'Reilly, chief executive of the Dublin Midlands Hospital Group, in the Review.

"Management and staff at the hospital deliver high quality care every day, and are committed to continuous improvement.

"There is no doubt that the Midland Regional Hospital Portlaoise has had its challenges, but as acknowledged by Hiqa, real improvements have been made.
"The recommendations contained in this review have been either implemented in full or are in progress. This review will further inform and drive this improvement," she states.

Phase three of the Review involved an examination of CTGs - cardiotocographs at Portlaoise - which involved grossly abnormal recordings of the baby's heartbeat, which had not been acted upon.

These cases involved four perinatal (death of any baby from the 24th week of gestation to one week after birth) baby deaths, one of which only came to the attention of the team during the review process.

"CTG monitoring emerged as a very serious issue in 3 baby deaths in the review and another baby delivered in the Midland Regional Hospital Portlaoise, and identified by the reviewers who had not been the subject of a specific complaint," the report states.

The review examined CTGs at Portlaoise from the mid-1980s to 2014 to determine if there was a pattern.
It found 90 cases of perinatal deaths at the hospital. However, no evidence of any similar failure to react to pathological CTGs, that might have been a contributory factor in these outcomes, was identified.

The report says that the external expert clinical reviewers attributed perinatal deaths to a range of causes, occurring in multiple different circumstances. No specific conclusions could be drawn.

The HSE Maternity Clinical Complaints Review received a total of 203 complaints relating to patient experience at nine maternity hospitals over a 40-year period, from 1979 to 2015.

130 complaints related to the Midland Regional Hospital Portlaoise, with 23 relating to other maternity hospitals.  The report says that the complaints process had led to improvements in maternity services in the country.