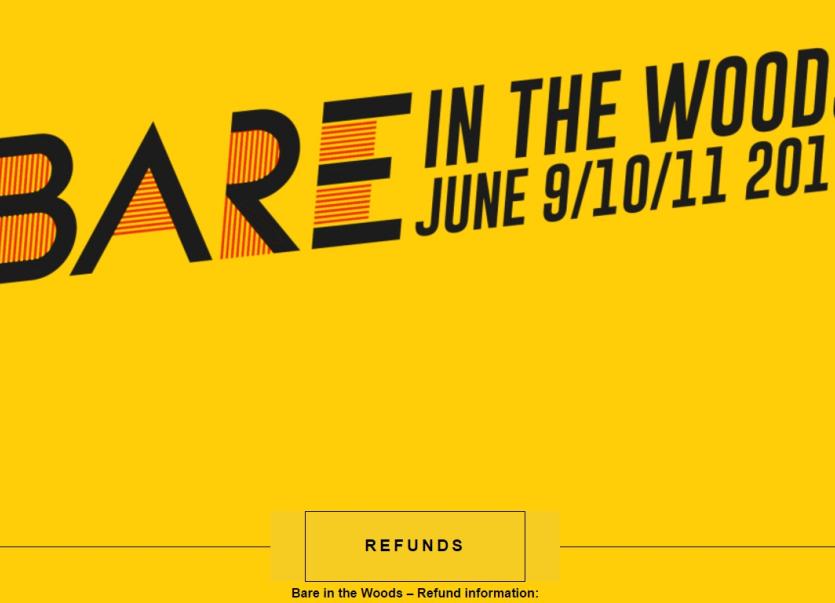 BARE in the Woods cancelled

The organisers of the BARE in the Woods Festival on the Laois Offaly border have announced ways to get refunds for tickets for this year's festival.

The organisers say tickets will be valid for the next BARE in the Woods festival or alternatively people can request a refund from Monday 29th of May from the original point of purchase as follows:

Ticketleap customers – You can claim a refund by emailing refunds@barefestival.com with the email address you originally purchased the tickets with.

Anyone who purchased tickets from the BARE in the Woods Christmas Information Shop will be able return them to the Pop up shop which will be open in Portarlington on Saturday 3rd of June and Saturday 17th of June from 11am until 6pm on both days.

Any other refund questions can be addressed by emailing refunds@barefestival.com

BARE in the Woods was due to take place at Garryhinch Woods near Portarlington  on the Laois Offaly border from June 9-11. Headlined by Irish - American rappers House of Pain, a host of international acts had been lined up. However it was called off last week after the organisers said the would not be able to comply with the licence granted by Offaly County Council.

Early bird tickets went on sale late last year at €100 for a three-day camping ticket, before rising to €150 thereafter. Day tickets also be on sale for Saturday and Sunday at an early bird price of €40. Tickets sales were described by the organisers as 'healthy'.

The Leinster Express understands it was hoped to attract a crowd of 10,000 people. It is understood 127 conditions were placed on the licence. Concerns had been raised with the organisers in advance about security, traffic, sanitation and other issues.