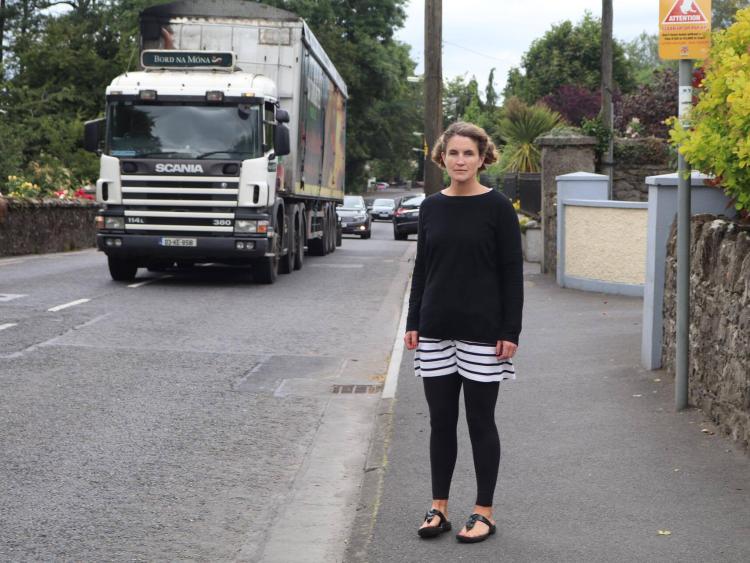 Lexy Norton on the busy N80 road outside her home

A Mountmellick mum of three who fears for her children's safety because of cars speeding on the road past her house, has begun a petition against a new proposal to increase the speed limit by Transport Infrastructure Ireland.

Lexy Norton's family home is one of many on the N80 road in Irishtown, Mountmellick. There is only one footpath on the opposite side. She has had three cars parked off the road outside her home "written off" by speeding cars in the past seven years.

"I am very concerned for my children's safety. They are not allowed in the front garden without me. I cannot let them walk to school without me. Last year after my car was taken out, I rang Cllr David Goodwin and Cllr Paddy Bracken, and we were talking about a roundabout at Foxes Corner. That would be a traffic calming measure in itself, nothing happened but I am still hopeful," she said.

The speed limit is 50km/h from Irishtown garden centre into the town, past her road. The TII want to raise it to 60km/h as far as the fire station in Irishtown.

"I was shocked, that they wouldn't consider Mountmellick as a living, breathing town where people exist, on the roadside. There is a school, a playground, a creche, a housing estate and a stud farm on this road. It is very built up. If the traffic stuck to 50km/h it would be ok, but they drive much faster than that. Unless they live locally, then they know how it feels to be on that road with cars speeding past," she said.

She has had widespread support for her petition, which can be signed in local shops like O Horains and O'Gormans, and the MDA. An online version can be signed here.

"I am delighted at the local support, but it makes me feel really sad that we all feel this way, that Mountmellick has been overlooked. This speeding problem hasn't been addressed enough. It it was lower, it would be fantastic, but it has to be enforced by the Gardaí," Mrs Norton said.

The TII is proposing to raise the speed limit as part of a nationwide Speed Limit Review. Laois County Council is doing its own county review, and say that unless both bodies agree, the limits will not change.

The review will shortly go out for public consultation for 30 days, when the public are encouraged to make submissions *

"We are doing the best we can to get the petition together and then make a submission. It is important for them to know the strength of opposition to this," said Mrs Norton.

*The public consultation period has since ended but the TII is yet to announce a decision.