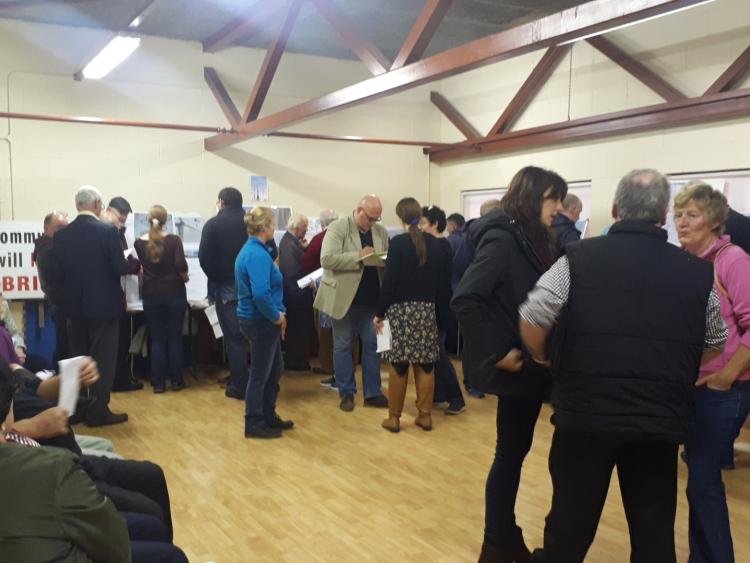 Information meeting in Portarlington on September 20 organised by concerned residents living near a planned windfarm.

A windfarm planned near Portarlington is due for approval within weeks, and townspeople are urged to object.

Portarlington residents are being urged to make themselves aware that a windfarm with huge turbines may go up close to the town, if approved by Offaly County Council.

An application for Moanvane Windfarm lodged by renewable energy company Element Power, is due for a decision on November 1. Any objections to it must be made by October 11.

Last Wednesday night an information meeting was held in Portarlington Community Centre, by residents from Walsh Island, Cloneygowan and Geashill, close to where the 12 turbine windfarm is planned. It will be 2.5km north west of Portarlington town, and visible from Derryounce Lake. See more detail here.

Less than 35 people were at the meeting however, with concern expressed that Portarlington people are either unaware of the plan, or feel it will not affect them.

"People in towns are not affected by turbines, they come out to protest on water charges because they have to pay them. The best thing to do is to ask people to make submissions, and help them do it," he said.

Businessman Willie Murphy did not know until recent days about the windfarm.

"Anybody who gets the 30 pieces of silver is not going to say anything. Families are falling out over this. I feel it's Ireland being pillaged again. It would be OK if this electricity was for local use, or for Ireland, but its exporting it for profit that I find objectionable," he said.

Donie Molloy is a member of the Port Trail Walking Group.

"We use Derryounce a lot for walks, I've been out to Mount Lucas and I won't go back, it's brutal. We walked 12km and never saw one bit of wildlife. I don't think this would be good for the community, who will want to go walking and look at them," he said.

Ciara O'Donohue, from Walsh Island has spent months raising awareness about the windfarm, as part of the Geashill, Walshisland & Cloneygowan Wind Information Group.

"When they go up it's too late. The only chance you have is to object in the next three weeks. If you don't take action, if you just think 'somebody should do something', well we are all somebody. Wind sounds great, especially to those living in urban areas, it's hard to explain but you don't need much explanation to those living beside them. I am not against wind energy, but it belongs away from people's homes, in windy places," she said.

She urged people to read the non-technical summary of the application, which is available for download here.

There are 54 homes within one kilometre of the proposed turbines, which will be 20 metres taller than Bord na Móna's nearby Mount Lucas windfarm. Another 32 turbines have been approved in nearby Rhode in Offaly, and 23 near Clonbullogue.

The failed reservoir site in Garryhinch is also understood to be under consideration as a windfarm by Bord na Móna.

"You have to get this one fought, because if we don't, there will be no leg to stand on for the next one. They will say you're already a wind energy area," said a woman at the meeting.

Anyone wishing to write a submission to Offaly County Council will be given assistance by the “Geashill, Walshisland & Cloneygowan Wind Information Group”.  Submissions to the council cost €20 each.

The group will hold clinics in the coming weeks to help people complete forms correctly. Contact them via facebook.

Below: Element Power's image of the view of Moanvane windfarm from Derryounce Lakes. 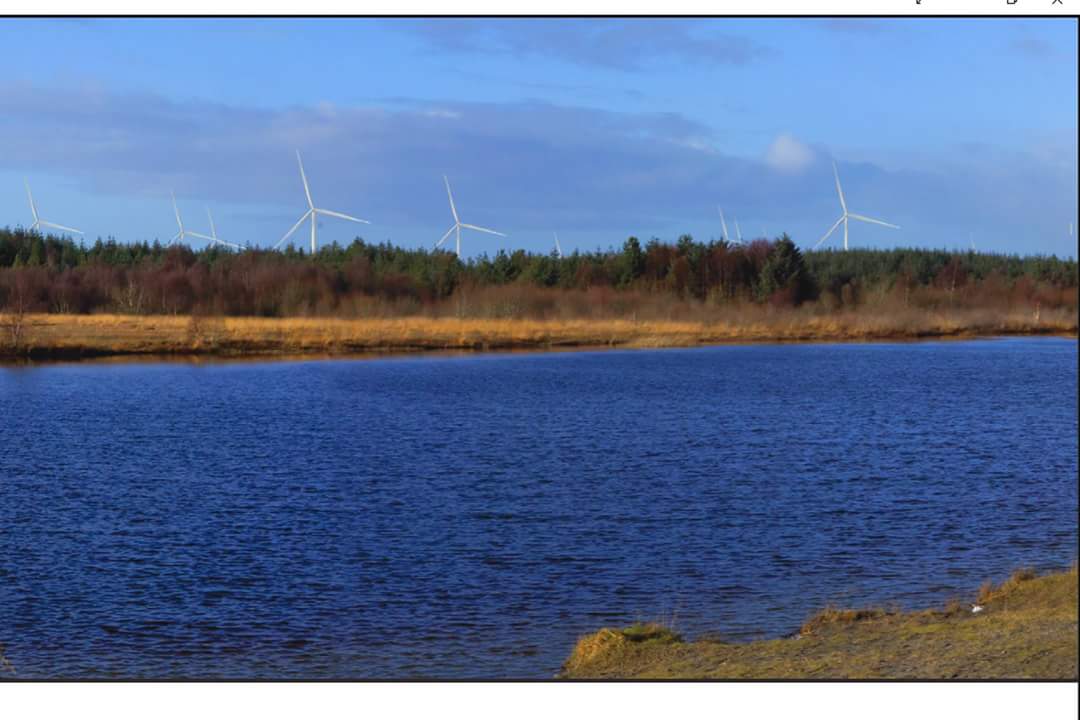