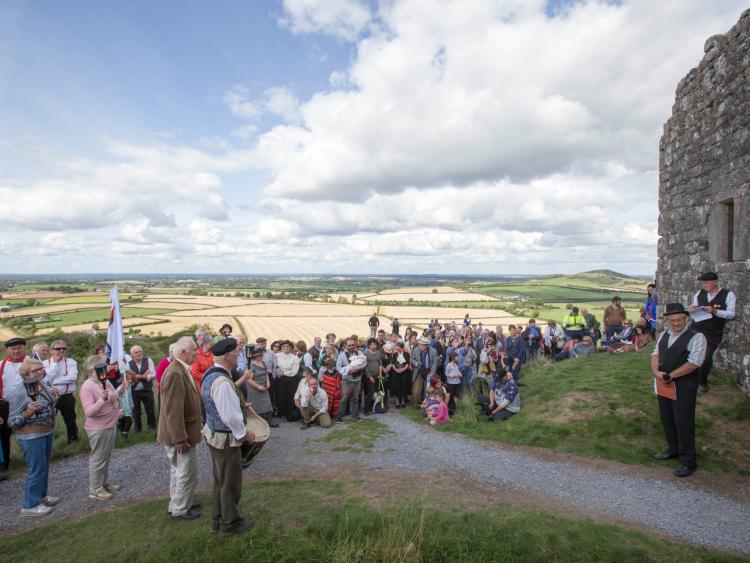 Visitors explore the Rock of Dunamaise during Heritage Week.

Laois received a tiny fraction of a €20 million pot of money set aside in 2018 to develop outdoor amenities for local people and attract visitors that can create jobs and improve incomes in rural Ireland.

The grants, confirmed on Tuesday, January 8, will support a mix of medium scale new developments. The money will also help with the repair and upgrade of existing recreational trails in rural areas. The successful projects will receive grants of up to €200,000 each.

No Laois project is listed in the final tranche of funding for such projects. There were no successful Laois applications in November 2018 when €8.1 million was allocated to 18 large-scale projects under Measure 3.

In September 2018 of €1.8 million in funding was allocated to 128 small-scale projects under Measure 1 of the programme. At the time three Laois projects received a total of €40,184. Projects in Portarlington, Heywood and the Slieve Blooms benefited.

Neighbouring Offaly received more than €107,000 for six projects under the same small-scale grant scheme. A total of €400,000 was allocated to two grant schemes in medium-sized project category.

Laois projects received less than 1% of the €20 million total allocated to 224 projects to benefit from the 2018 fund.

"This is generating income for rural areas and helping to create more jobs in the hospitality and leisure sectors.

“Figures available from Fáilte Ireland reveal that in 2017, 26% of all overseas tourists engaged in some level of hiking or cross-country walking. This equates to 2.3 million tourists, spending an estimated €1.3 bn during their stay in Ireland. A further 451,000 overseas tourists took part in cycling activities.

“Local communities are also using these trails in large numbers. A survey of users on the Waterford Greenway, Ireland’s longest off-road cycling and walking trail, shows that almost two-thirds of users are local people.

The grants were announced in collaboration with Fáilte Ireland which contributed €3 million of the total being allocated to medium sized projects.

“As the National Tourism Development Authority, it is one of our strategic objectives to ensure that the economic benefits of tourism are spread regionally across the country. We will continue to work positively in partnership with the Department of Rural and Community Development to deliver quality visitor experiences and to enhance and further develop our recreational tourism offering and the additional social benefits they bring to local communities,” she said.

More than €40 million has now been allocated to almost 600 projects under this scheme since 2016 to improve existing, and develop new, walking trails, greenways and other recreational amenities for communities and visitors all over Ireland.

Mr Ring congratulated the Local Authorities, Local Development Companies and communities who have worked to bring forward the projects funded under the scheme in the last two years.