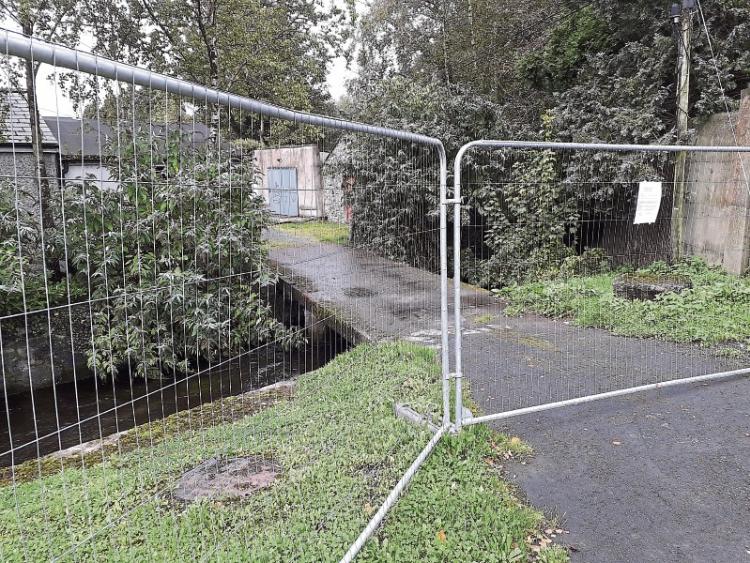 A Portlaoise bridge believed to be over 100 years old has been closed off by the council due to safety concerns, leaving local residents “in limbo” as to when it will be reopened.

At the recent meeting of the Portlaoise Municipal District in Laois County Hall, Cllr Caroline Dwane Stanley asked the council to clarify who is responsible for reinstating the bridge at Lower Bridge Street, Portlaoise.

He said the bridge is not in the charge of Laois County Council. It was constructed sometime before 1913 by a number of residents of the ten properties whose back lane is accessed by the bridge.

Cllr Dwane Stanley said she was not one bit happy with the response. She said that weeks ago, a consultant carrying out a survey on the site around the parochial hall contacted the council to say the bridge was unsafe and within 24 hours the bridge was closed off.

She said that residents were issued with parking permits for Bridge Street, but some residents have oil central heating and they now have no access to get a fill of oil.

“I contacted water services and I got a lecture about health and safety,” she said. “There are ten houses there left in complete limbo.”

She said that the roads department had said it was private, yet the council had closed it off.

“It’s as clear as mud, we still don’t know who’s responsible for it. If it’s private, how can the council close it off? Water services haven’t made any effort to contact the residents.”

Managing director, Mr Simon Walton asked the councillor to leave the issue with the council and it would be addressed in the coming days.

Cllr Willie Aird said that in his opinion, the bridge was the responsibility of the council.

“That bridge is not there since 1913, the local authority cleans the river down there,” he said. “It is the responsibility of Laois County Council, no one else.”