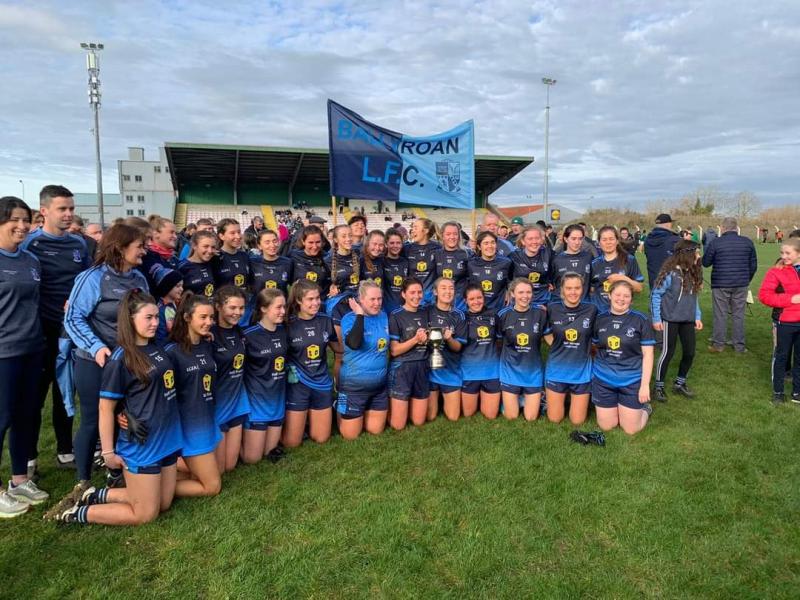 Ballyroan have been dominant at this Intermediate grade all season, with a number of impressive victories in the group stages and the semi-finals. They were huge favourites coming into this clash with Graiguecullen, and they lived up to that tag line by easily accounting for their opponents and claiming Intermediate honours.

Ballyroan couldn’t have dreamt of a better start, as they had the ball in the Graiguecullen net with only a minute played in McCann Park. Emile McWey slid in Laois Ladies Senior footballer, Kate Whelan, and she neatly finished to the left corner, giving Ella Byrne no chance in the Graiguecullen goals.

Ballyroan added four points to that goal during the course of the first quarter, as they seemed comfortable in both attack and defence. Centre-forward Rachel Fitzgerald landed a couple of frees, while Roisín Fitzgerald and Kate Whelan placed over a point each from play.

Graiguecullen had plenty of possession during the period, but they couldn’t make it work up front. Rachael Doyle was unfortunate to see her free come back off the the post, while the final ball wasn’t accurate enough, with Ballyroan’s Clodagh Dunne and Isabelle McWey sweeping up possession at the back.

Graiguecullen nearly had the ball in the back of the Ballyroan net at the beginning of the second quarter. Mary Ann O’Neill’s free from an acute angle dropped short and there was panic on the goal line as the ball was fumbled. Ballyroan corner-back, Emma Cass, reacted just in time to scoop the ball off the line and clear the danger.

Faye McEvoy burst up from midfield to knock over Ballyroan’s fifth point, and then Eimear Mooney added her name to the scoresheet to leave Ballyroan 1-6 to 0-0 in front.

Graiguecullen continued to press forward, with their midfield of Jade Nolan and Caoimhe Fitzpatrick getting through a lot of work. However, they continued to struggle in the final third, with their first half summed up with Sally Amond striking a close range effort off the uprights with the last play of the opening half.

Kate Whelan placed over a free to start proceedings in the second half for Ballyroan, before Graiguecullen finally got on the scoreboard. Graiguecullen wing-back Caoimhe Kelly intercepted a Ballyroan pass and went on a tearing run before unselfishly laying it off to Mary Ann O’Neill, who curled it over from a tight angle.

Graiguecullen had two huge goal opportunities after that, but failed to find the net on both occasions. For the first one, Rachael Doyle saw her free drop short into the square, with Lauren Walsh firing the rebound towards goal, but it was saved on the line by Ballyroan.

In the next possession, Kelly O’Neill went through on goal, but her effort was well saved by Aoife Mullins in the Ballyroan net, who was solid as a rock in goals throughout.

Ballyroan punished Graiguecullen’s lack of ruthlessness down the other end by adding on three more points before the second half water break. Faye McEvoy was on fire, as she fired over two more points, while Kate Whelan kicked another free between the posts as well.

Faye McEvoy fired over her fourth point straight after the water break, as Graiguecullen just couldn’t live with her pace and power. After that score, tired legs seemed to take over as Ballyroan missed plenty of chances to extend their lead.

Graiguecullen’s Rachael Doyle actually kicked the last two scores to put some respectability on the scoreboard, with both coming from play. However, it was Ballyroan’s day, as they celebrated and can now look forward to Senior football in 2022.