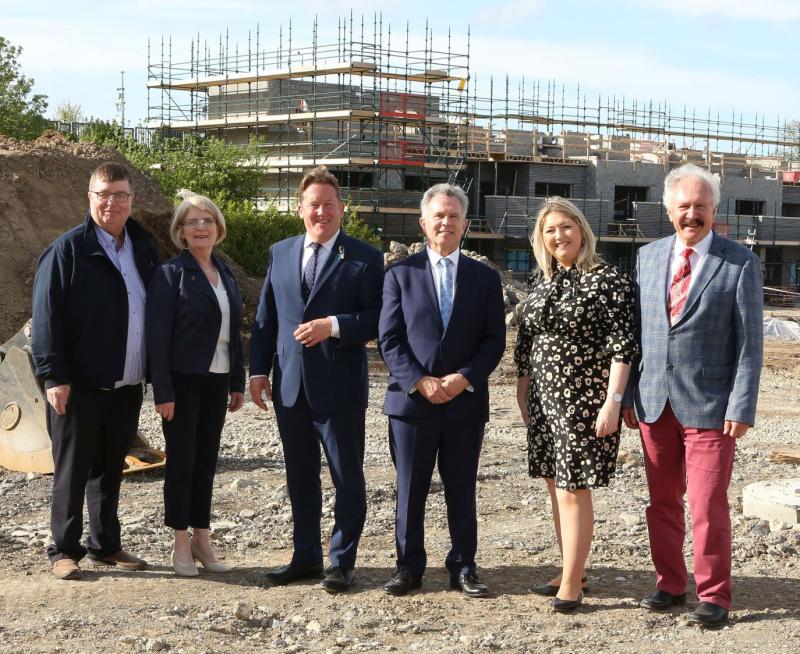 People living in Australia would return to Laois to live in smaller villages if they could buy a site that is connected to the services such as water and sewerage, Laois County Council officials have been told.

However a new scheme designed to bring new life to Laois villages looks unlikely to provide many new options to meet such request.

That’s the picture that emerged at a recent meeting in County Hall where county councillors were given an update on how Laois could benefit from a new €50 million scheme.

Just three villages are deemed eligible for potential investment with significant restriction being that communities must have absolutely no access to a public wastewater treatment scheme to qualify.

The restriction in the terms of the new Rural Water Programme 2022 Scheme measure 8 emerged at the Borris-in-Ossory Mountmellick Municipal District meeting.

“LCC have received confirmation that any village/settlement on the Irish Water list of serviced/partially serviced settlements cannot be progressed under this new measure. Therefore, Ballacolla would not be eligible.

“Having reviewed the terms of the new Scheme and, acknowledging the planning and environmental criteria against which applications will be considered, the top three, emerging, locations in Laois are (in no particular order) Vicarstown, Cullahill and Ballyfin.

“Laois County Council is reviewing these locations against the assessment criteria, with a view to selecting one for full Feasibility Assessment and submission to the Department of Housing, Local Government and Heritage in September 2022.

He said subsequent applications for subsequent years will then follow, priorities advised by the terms of the Scheme and the value of funding allocated to Laois County Council under the Scheme.

“The Scheme as published is an 85% funding Scheme and LCC will have to fund 15% of the overall value of works undertaken in Co Laois under the Scheme,” he said.

Cllr Clooney said he was delighted for Cullohill and Ballyfin but saddened for Ballacolla. He said the pressure must be kept up to have wastewater treatment extended because of the demand from people to live in Laois.

“I’ve got phone calls from Australia from people asking if there are services sites in the villages. People want to come back and live in Laois. They know there is work,” he said.

He believe that the scheme could be profitable for the council because services sites could be sold.

He added that the green agenda will hit building in rural areas.

“Like it or not, these one off houses in rural areas are going to come under pressure,” he said.

He said rural communities would be under pressure to survive if services are not upgraded in villages to allow houses to be built.

He said he would do everything possible to have Ballacolla and other villages upgraded.

He called on the six councillors in the district to unite to put pressure on decision makers.

“Everybody knows our villages are dying,” he said.

He also pointed to restrictions on once off housing as a reason for more work to be done. He added that schools in smaller towns and villages.

Cllr James Kelly, Independent, was also disappointed that Ballacolla had not been included but he welcomed the inclusion of Ballyfin and  Cullohill.

District Engineer Edmond Kenny was asked to seek a timeline by Cllr Kelly.

Cllr Bergin was surprised that villages that are partially services are excluded from inclusion and asked if there are other schemes under which they would be eligible.

Cllr Paddy Bracken, Fianna Fáil, was also concerned about the restriction on communities where there is some access. He said the same problem is faced by people living in Mountmellick that rely on septic tanks which are causing pollution.

“More money needs to be spent on sewerage,” he said.

He added that farmers are being penalised for slurry pollution but areas of towns are being polluted because there is no wastewater treatment.

Cllr Seamus McDonald, Fianna Fáil, said there are many places in Laois that don’t have sewerage such as Coolrain and Rosenallis. He agreed that councillors should unite.

The Minister for Housing, Local Government and Heritage, Darragh O’Brien, announced the scheme in April 2022 which at the time was described as having the aim of targeting the waste water collection and treatment needs of villages and settlements without access to public waste water services.

The announcement followed the completion of a review of villages and settlements that do not have access to public waste water infrastructure. This work included consultation with stakeholders and a detailed survey completed by local authorities of villages and settlements in their area not serviced by waste water collection and treatment systems.

Local Authorities have until 15 September to apply.

The Minister said: “The improved waste water services will enable local authorities to work in partnership with the community to enable villages and settlements to be better places to live, work and visit, to support overall government objectives under Housing for All and give practical effect to our vision for a vibrant rural Ireland under Our Rural Future.

“I am delighted to be in a position to allocate funding to allow this important work to be progressed in rural areas, providing a boost to local economies and allowing for sustainable development through compact growth, including housing that is proportionate to the village," he said.

Applications for funding are limited to villages and settlements with a ‘core area’ that has at least 150 population equivalent (PE) based on its existing residential population.