WEATHER WARNING: Dramatic change coming in the weather as Met Eireann issues Weather Warning for all of Ireland 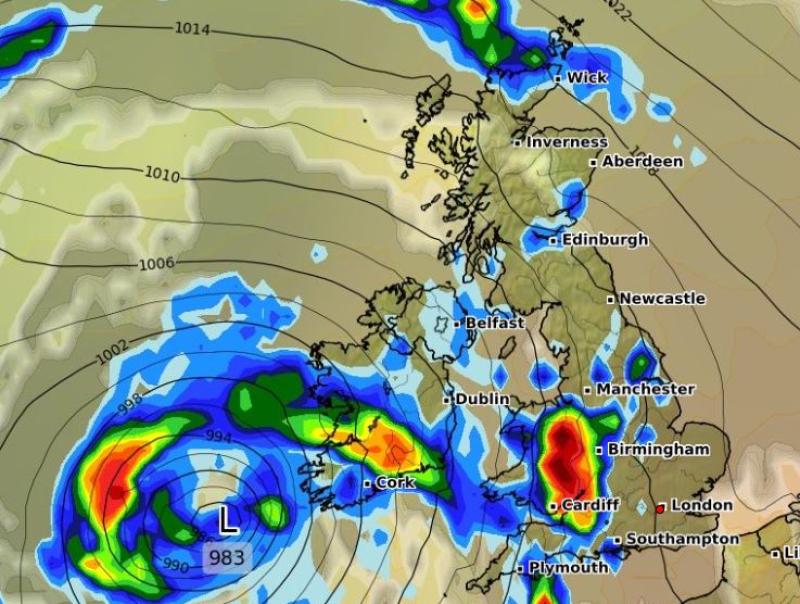 WEATHER WARNING: Dramatic change coming in the weather as Met Eireann issues Weather Warning for all of Ireland

The weather is set to change dramatically over the weekend with Met Eireann issuing a Weather Warning for all of Ireland.

Met Eireann has issued a Status Yellow Rain Warning for Ireland. Met Eireann is warning that there will be high rainfall amounts this weekend that may cause disruption. The warning is in place from 9pm on Saturday until noon on Sunday.

According to the latest Met Eireann weather forecast, it will be rather cloudy today (Friday) but with some hazy sunny spells. There will be scattered showers, some heavy in the east and northeast. During the afternoon, more persistent rain will develop in Atlantic coastal areas, spreading eastwards in the evening. Highest temperatures of 17 to 22 degrees in moderate breezes, varying in direction.

Cloudy and wet overnight with outbreaks of rain, heavy at times. Clear spells and scattered showers will follow across the south and west later. Lowest temperatures of 6 to 9 degrees in the southwest, but much milder elsewhere with lows of 10 to 14 degrees. Winds will be moderate to fresh southeast in direction initially, but will veer westerly in the west of the country later.

According to the latest Met Eireann weather forecast, on Saturday morning, rain will push northeastwards, becoming confined to the north and east by afternoon. Elsewhere, there will be a mix of sunny spells and showers, some of the showers will be heavy and thundery. Highest temperatures of 14 to 18 degrees in a fresh south or southeast breeze.

Turning very wet on Saturday night and potentially quite windy also. Clear spells and scattered showers at first, but rain accompanied by strengthening winds will sweep northwards over the country. The rain will turn heavy bringing a possibility of localised flooding. There is the potential for strong winds for a short period. Lowest temperatures of 7 to 12 degrees.

According to the latest Met Eireann weather forecast, strong winds will abate on Sunday morning as heavy rain clears northwards. It will be a breezy day with sunny spells and some scattered showers. By evening, a further band of heavy rain will push in across the southern half of the country and winds will strengthen. Highest temperatures of 17 to 21 degrees in fresh and gusty southeast winds. Rain will clear northwards overnight with clear spells and scattered showers following. Minimum temperatures of 11 to 14 degrees in fresh and blustery southeast winds.