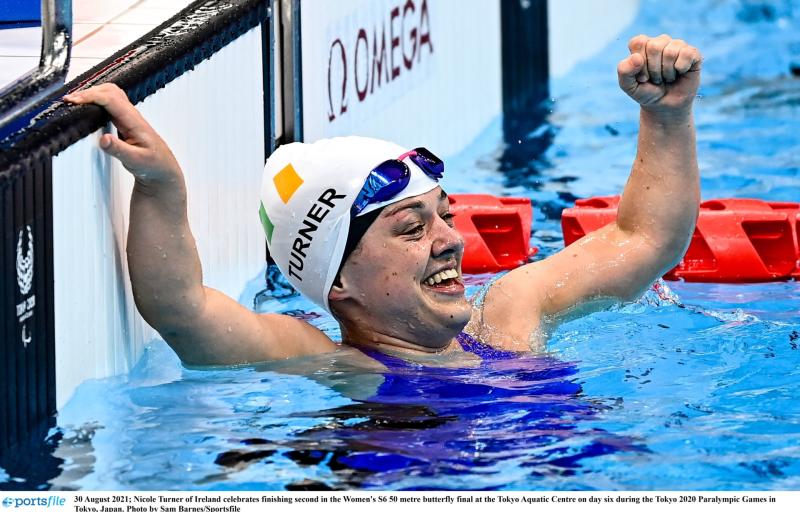 Laois swimmer Nicole Turner was among those honoured with the Irish Times / Sport Ireland Outstanding Achievement Award 2021 which was presented to Team Ireland medalists Tokyo 2020.

The nineteen-year-old swimmer was one of nine women who performed superbly at the Olympic and Paralympic Games during the summer, winning seven medals in total.

Turner won silver in the S6 50m butterfly, taking home Ireland's fourth medal of the Paralympic Games. The Portarlington swimmer, who qualified for the final with the second fastest time, backed up this form, clocking a time of 36.30 in the final to land her spot on the medal podium.

The eight other Ireland team members honoured were Kellie Harrington, who became only the second Irish woman to win a gold medal in boxing, Aifric Keogh, Eimear Lambe, Fiona Murtagh and Emily Hegarty, who won bronze in rowing, the first Irish women to win a team Olympic medal, Katie-George Dunlevy and Eve McCrystal, who won two gold and one silver Paralympic medals in track and road cycling and Turner’s fellow swimmer Ellen Keane who won gold at the Paralympics.

The Outstanding Achievement Award was accepted on behalf of Team Ireland medalists Tokyo 2020 by Ellen Keane and Eimear Lambe from the Minister of State for Sport Jack Chambers at an awards ceremony in Dublin just before Christmas. Due to covid, this year’s ceremony was streamed live online.

In what was an outstanding year for sport, but particularly for Irish sportswomen, Ellen Keane told awards presenter Des Cahill from RTE that the performances in Tokyo highlighted the calibre of our female athletes.

“It is lovely to see that all nine women are being recognized, because you honestly couldn’t pick out one performance here, everyone had such a good Games and such a good year, and especially the year that was in it, having to go through all the lockdowns, then to reach the podium nine times is an amazing thing. I’m so honoured to be able to be here to accept this award, with Eimear, on behalf of the others.”

Turner who was born with hypochondroplasia, making her of short stature, started swimming with her local club, Portarlington Piranhas, before moving to Laois Marlins in Portlaoise.

She later moved to train with Ireland’s top swimmers at the National Aquatic Centre in Dublin in 2017. In 2019, after completing transition year, she deferred her secondary school studies to train fulltime for Tokyo. That decision paid off in spades as it took a world record by her Chinese rival Yuyan Jiang to deny Turner the race win in an earlier heat, and she finished second to the same woman in the final.

A delighted Turner said at the time; "I thought I’d be in a fight for bronze here so to get silver, I’m just in shock! In those last few strokes all I was thinking was that it hurt badly but just keep going. No one will go down without a fight and I certainly gave it a fight."

Paying tribute to all the 2021 winners, Sports Editor of The Irish Times Malachy Logan said the unparalleled performances by Irish sportswomen in 2021 captivated the Irish public throughout a year when they needed more than ever to have their spirits lifted.

“The inspiration these outstanding women and teams provide for the next generation of aspiring sports stars is invaluable. Not alone can they compete with the best in their sports, they also handle their success with a humility and modesty that speaks volumes for the coaches, partners, parents, and friends, who are an integral part of their success.”

This is the 18th year of the awards and other recipients of the 12 monthly awards  included: golfer Leona Maguire, who excelled as the first Irish woman to represent Europe in the Solheim Cup – she went on win four and a half points; Vikki Wall who was player of the match in Meath’s stunning All-Ireland final victory over a Dublin team seeking their fifth title in a row; cricketer Amy Hunter who turned 16 on the day she scored 121 runs for Ireland against Zimbabwe in Harare, an achievement which made her the youngest player, male or female, to score a one-day international century and Bray boxer Katie Taylor, who picked up her 15th monthly award in May.

“Today we celebrate all that is positive about sport both on and off the playing field as we honour Ireland’s top sporting talent. Each award recipient is an excellent ambassador for their sport and their country, and I thank them for their commitment.

"I would like to acknowledge Sport Ireland and the Irish Times for continuing to recognise the incredible contribution of Irish women in sport. I would like to congratulate all of the monthly winners and also pay tribute to their families and all of the coaches and support teams who have helped them to reach the highest levels of sport.”

The Minister of State for Sport and the Gaeltacht Jack Chambers said: “It’s so important that our young people and especially girls have role models in sport to look up to and to emulate. We are fortunate to have had so many brilliant sportswomen who have excelled across so many different sports this year and I am confident they have inspired a future generation of stars to get involved in sport and physical activity.”

“Congratulations to all the monthly award winners whose incredible feats achieved in 2021 lifted their communities, their counties and their country this year. I want to pay a special tribute to the overall award winner Rachael Blackmore and to the outstanding achievements winners.”

Transfer Talk: What moves could Premier League teams make in the transfer window?

“To continue this success story of Irish women in sport, Sport Ireland will continue to develop, foster and promote women’s sport through the work of our National Governing Bodies and the network of Local Sports Partnerships. I would like to take this opportunity to pay tribute to the many people who work hard on the ground and volunteers who give their time freely to maximise opportunities for women to take part in sport and physical activity."