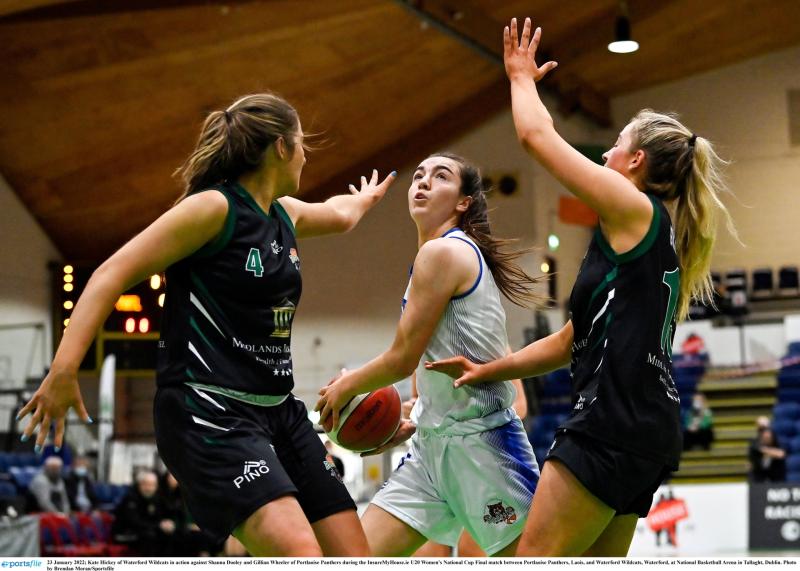 Portlaoise Panthers were first off the mark, five points from Gillian Wheeler, followed by Shauna Dooley’s three point jump shot, moved them 8-0 in front a minute and a half in.

Kate Hickey got Waterford Wildcats up and running with a three point jump shot, however Dooley’s layup straight afterwards had the Panthers 10-3 ahead. Waterford Wildcats went on an eight point run, started by Anna Grogan’s three point jump shot, and finished off with Kate Hickey’s layup and subsequent free throw, after being fouled. A pair of baskets for Portlaoise Panthers re-established a lead for the Midlands side, 14-11, five and a half minutes in.

Waterford Wildcats then went on a 13 point run and never looked back. Ciara Butler landed a three with 43 seconds left in the quarter and it was 24-14 to Jillian Hayes’ side, before a late Lisa Blaney layup made it 24-16 at the end of the first quarter.

The Hickey sisters, Kate and Sarah, had 9 and 7 points respectively in the opening quarter and they continued where they left off in the second quarter, Sarah Hickey’s layup with a little over three minutes gone made it 31-20 to Wildcats. Illanna Fitzgerald cut inside for a layup and it was 35-20 with three minutes to go. A Sarah Hickey layup shortly afterwards and Wildcats had a 17 point lead.

Portlaoise Panthers responded with four points, a Hannah Collins layup and two free throws by Ciara Byrne, to reduce the deficit to 37-24. A Grogan layup in the final minute stretched it to 39-24 at half-time in favour of the Wildcats. Sarah Hickey had with 13 points and 12 rebounds by the break, while her sister Kate was on 12 points.

A nice scooped layup from Lisa Blaney in the fourth minute of the third saw Portlaoise Panthers trail 43-30. A pair of layups and two free throws from Ciara Byrne followed and it was a seven point gap, 43-36. Kate Hickey broke that scoring run with another layup for Wildcats, then Sarah Hickey landed two free throws to make it 47-36 by the midpoint of the quarter. Blaney’s layup with 1’50 left and it was a 10-point game, 49-39, but Sarah Hickey notched up the quarter’s final points with 21 seconds to go and Waterford Wildcats were 51-39 in front.

A Bami Olukovode layup for Waterford Wildcats in the fourth minute of the final quarter had them up 56-43. Portlaoise continued to try and force their way back into it, a steal and layup from Wheeler and it was 58-46 midway through the quarter. But Sarah Hickey continued to torment Portlaoise Panthers, her layup with 4’14 left brought her to 24 points and Waterford Wildcats led 60-46. The Wildcats side safely negotiated the final minutes to run out 67-51 winners.

“Look, the better team won today, we beat them at under 18, and I think you learn more from losing, I think that was the case for Waterford today. Some unbelievable performances there from Kate and Sarah. I think Sarah finished with 24 points and 23 rebounds, and our girls couldn't buy a basket inside, but look that's basketball.

"We're here the last three or four years, it's great to be up at the finals, and it's great for our club, we're a building club each year, and it's down to this group of girls for our younger kids to look up to. So they're after setting the foundation for the next group coming forward, and I'm sure we'll meet Wildcats again and have our day in the sun.”