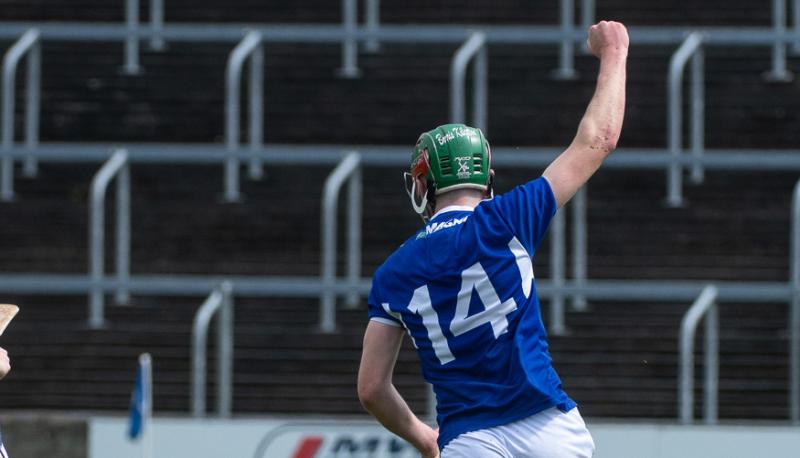 After their heartbreaking Leinster final defeat to neighbours Offaly, the Laois Minor hurlers were back in action once more in O'Moore Park on Saturday afternoon.

Laois faced Galway in an All-Ireland qualifier match. Laois, Galway, and Clare are in a three-team group, with the top two advancing through to the All-Ireland semi-finals.

Both teams played out a thoroughly enjoyable game of hurling here. There was only a single point between them at half-time, but Galway got on top for most of the second half. While a late Mark Downey goal set up a nervous finish, Galway held on for the victory.

Galway were first on the scoreboard in O’Moore Park, as full-forward Aaron Niland won the throw-in, burst forward, and split the posts. Laois replied down the opposite end straight away, with wing-forward Jack Breen showing a nice turn of speed before firing over.

Aaron Niland nudged Galway ahead once more through a placed ball, but Laois then hit a purple patch. Ben Deegan converted a 65’ before Laois struck for the first goal. Eoghan Murphy played a ball into the square, and Jer Quinlan caught it despite being surrounded by two Galway defenders, and Quinlan finished home.

Ben Deegan knocked over another 65’, but Galway stemmed the tide then. Corner-forward Conor Dolphin sliced over from a tight angle, and then Aaron Niland landed two more points.

Deegan replied with a free for Laois, but Galway hit back with another three points in a row. Paddy MacCárthaigh, Aaron Niland (free) and Conor Lawless all raised white flags for the Tribesmen, who now led by a single point.

Deegan and Niland exchanged points from frees as the teams went back and forth for a bit. Cullen Killeen then scored a fine point after showing a nice burst of pace to go past his man and place over.

Laois kept the scoring ticking over with another Deegan free, but Galway responded with scores from Rory Burke and Cullen Killeen. Laois scored the last point of the half, with Thomas Brennan placing over a lovely score after good running from Jack Breen.

The home side trailed 1-8 to 0-12 at the half-time break. While Declan Qualter’s charges would have been content with the scoreline at this stage, Galway were beginning to look dangerous in front of the goal towards the end of the first half.

Galway opened the scoring for the second half, with midfielder Paddy MacCárthaigh landing a lovely point between the posts from the halfway line. Laois responded through Jer Quinlan, as he received a pass from Eoghan Murphy before Quinlan split the uprights.

Aaron Niland, who had an exceptional game, popped over another fine score for Galway. Both sides were then guilty of some poor wides and decision-making, as Galway remained two points to the good with under twenty minutes of normal time remaining.

Niland knocked over a free for Galway to restore his side back to the scoreboard, and then the same man added another to put them four to the good. Laois badly needed the next score, and they did manage to get it.

Jer Quinlan, who was being double marked throughout, caught a ball in that he had no right to. As he was falling off balance, Quinlan managed to brilliantly flick it over the bar and raise a roar from the Laois supporters.

Quinlan cut the gap back to two points after he received the ball from substitute Mark Downey, who powerfully cut through the Galway rear-guard. Niland hit back with a couple of frees for Galway before a Deegan free left three between them with under ten minutes to play.

Galway grabbed a few crucial scores then. Conor Lawless and Cullen Killeen knocked over a point apiece, as Laois looked like this one might be slipping away from them.

Quinlan ended the drought with a point from close-range. However, Niland cancelled that out down the opposite end. While Eoghan Murphy grabbed another point for Laois, Galway hit back with the next two scores from captain Rory Burke.

Laois gave themselves a lifeline in stoppage time when substitute Mark Downey found the back of the net. However, they couldn’t find another goal, and Galway saw it out to the finish.