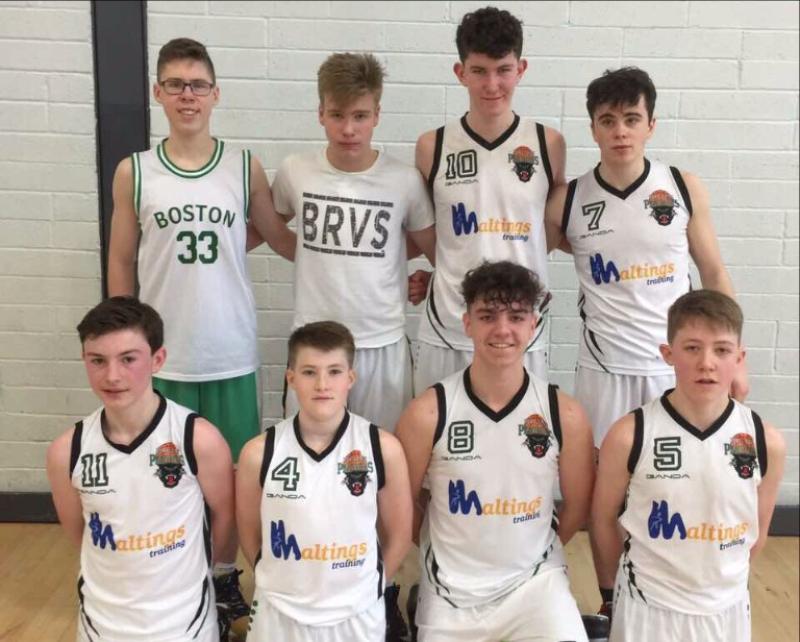 The Portlaoise Panthers U-16 boys team.

Our U-16 Boys travelled to Dublin to take on Liffey Celtics in the Division 2 Dublin League.

This game allowed for the Panthers to mix up their two U-16 teams to get other players used to playing together. Celtics have won this encounter previously and Portlaoise wanted to make amends.

The Panthers started off quickest adopting a zone defence and focused on getting out on the break in transition. Great scores from James Phelan and Trevor Swayne got the ball rolling as Portlaoise’s defence proved difficult for the Celtics side to break.

The presence of Mark Vesey and Niall Carey on defence meant that Portlaoise were very strong under the boards and allowed Swayne, Phelan, and Gary Morrissey to keep running the floor.

Carey got his first score of the game after good work from Vesey inside. Phelan got his name on the scoresheet after he was attacking the basket on numerous occasions. Ben O’Reilly sank a huge three pointer which was a big score at this stage in the game. Portlaoise went into a nine-point lead as Celtics continued to struggle to break down Portlaoise.

Celtics got firing as they stepped up to hit two big three pointers when they needed it most. The introduction of a big man inside for Celtics proved rewarding as he continued to cause trouble for Portlaoise and he picked up a few baskets of his own. Portlaoise led by five at the end of the quarter.

The second quarter saw Celtics come out stronger as they forced Portlaoise to make some silly turnovers. Portlaoise struggled to get scores on the board but Phelan and Morrissey stepped up with some big scores to keep the score line at a distance.

The introduction of Glen Comerford steadied the ship for Portlaoise as he helped pull some great rebounds on defence. James Phelan continued to try get on the break and forced Celtics into fouling as a result. Swayne found himself in foul trouble and he was missed as Celtics began to dominate and get some fast break scores of their own. Celtics got on top during this quarter and led at half time by four points.

Portlaoise came out far stronger in the second half as some words on the side-line seemed to wake the team up. Some hard intense defence saw Portlaoise get out on the break on numerous occasions.

All players on the court contributed here as Portlaoise stormed into a nine-point lead. Conor Menendez was working extremely hard and meant that Celtics big man struggled inside to gain any possession. Portlaoise led by seven at the end of the third.

The final quarter was end to end and could have gone any way but Portlaoise looked the stronger. Both teams exchanged baskets as the final minute approached. Celtics hit some huge three pointers to keep them in the game. Vesey pulled some brilliant rebounds and got some points on the board to get the lead out to two.

Celtics hit another three but it was quickly cancelled out by a great basket from Swayne as he stole the ball and finished on the other end. Gary Morrissey finished the game off with a free throw shooting securing a victory for the Portlaoise side on a score line of 52-50.