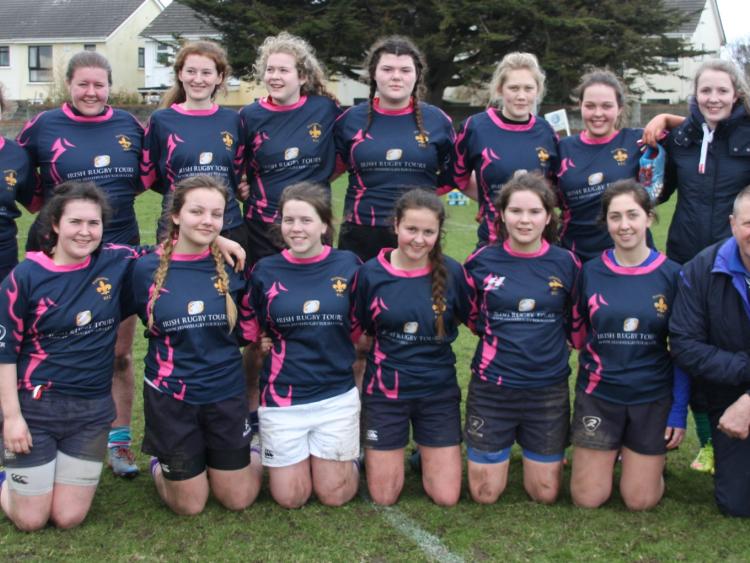 The Portlaoise girls U-18 team which defeated Suttonians.

The U-18 Girls Portlaoise team departed from Togher on a miserable Saturday morning, leaving behind water-logged pitches and cancelled matches.

Things began to look slightly brighter at the Red Cow and when the players disembarked on Strand Road near Sutton Cross they emerged into beautiful sunshine and a much softer day. Their encounter with Suttonians would take place on a perfectly sand drained pitch against a back-drop of Howth Head.

At stake for Portlaoise was a chance earn a coveted home cup semi-final.

Side-lined, through minor injuries, on this occasion were Sarah Miller and Gillian Kelly. Both will be match-fit soon.

Portlaoise controlled play for the first quarter but the sides were on level terms as a result brilliant defensive tactics by Suttonians. It fell to Áine Camphuijsen to break the dead-lock and carve an opening in the Suttonian wall to steal a well-earned try near the flag.

Aoife Bracken soon followed over the whitewash after some magnificent forward play by Portlaoise, but Suttonians replied with a try in the corner. Portlaoise switched play to the outside channel where Dervla Breslin and Áine Camphuijsen interacted well.

Having gained tremendous ground Tiarna McEvoy and Charlie Walsh brought play back to the forwards allowing Aoife Bracken to crash over for her second try.

Alice Dunne capped off the first half with a try to leave the score at the break at 20-5. Portlaoise thundered into the second half with a powerful forward drive. Dervla Breslin crashed through the defence and off-loaded to Donnagh Mortimer who ran in a superb try.

Captain Bracken followed up with a hat-trick which was converted by Emily Horgan. Some inventive running by Shannon Dunne put Alice Dunne in for her second try of the day.

Suttonians responded with a try that kept them in touch but Charlie Walsh made a line break passing to Isobella O’Toole who off-loaded to Alice Dunne to score her hat-trick.

The resulting re-start kick was cleanly caught by Alice Dunne who sliced through the opposition to score a solo try between the posts. Emily Horgan converted bringing the final score to 49-10 and earning Portlaoise a semi-final match on their home turf.

Backs and forwards played outstandingly well as a unit but the player of the match went to Dervla Breslin.

Some former Portlaoise U-18 players were in action on opposing sides in the All Ireland League clash on Sunday between St Mary’s and Blackrock College. Emma Hooban scored two tries while Eimear Corri scored one of the four scored on the day. Niamh Griffin played scrum-half while Liz Brophy played on the wing.

Portlaoise welcomes women and girls to join the club all year round.