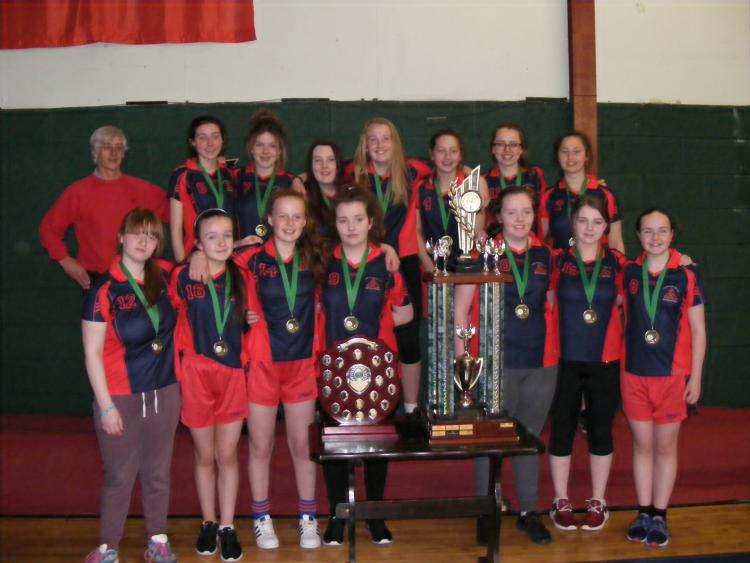 Mountrath Community School U-13 and U-19 All Ireland team winners with coach Jimmy Hayes.

The school, which was crowned Ireland's leading secondary school for girls table tennis, displayed their talent to the full as they beat all comers with outstanding displays over many early rounds in Leinster. From there, they took on and defeated the best Munster, Connaught and Ulster had to offer.

The U-19 girls team of Jessie Hayes, Claire Handcock, Sarah and Tiegan O'Connor, Leanne Delaney and Nadia Krawczun along with subs Catriona Rafter, Hailey Hayes and Ciara Phelan all played an amazing part in this fantastic success.

The U-13 girls team of Corinna Hayes, Amy Jestin, Grace Kerfoot, Kate Feeney and Catriona Phelan were also in superb form right through the season, from October to May.

In the U-19 semi-finals, MCS overcame Connaught champions St Attracta's CS on a 7-1 scoreline. They followed this with a 7-1 win in the final over Munster champions Colaiste Choilm SC, coached by Conn Higgins.

The U-13 girls had a more demanding event where they were 5-4 winners over Ulster champions Banbridge Academy and followed with the same winning scoreline over Ballyhaunis CS, representing Connaught. Jimmy Hayes was coach to both MCS winning teams.

The girls U-19 team have qualified for the World Table Tennis Schools finals in the Czech Republic in 2018 as a result of their win. Overall a super performance by all concerned, which also included School PE Teacher Mr Christy Coughlan who played a leading roll all during the season on behalf of the school.

A fantastic result also for School Principal Ms McCarthy who always gave full support and leadership to all concerned. Indeed the support from all within the School was amazing which was really appreciated by both teams and coach alike.