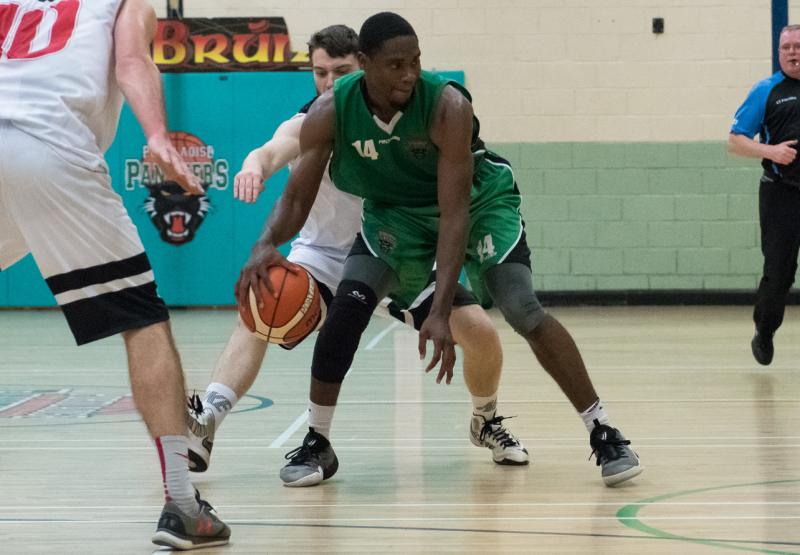 Portlaoise Panthers made their first road trip of the season on Saturday night as they made their way to the Mercy Hall in Sligo to take on Sligo All Stars.

Both teams were looking for the first win of the campaign and following two losses each to date this was going to be a massive game. And so it was as the contest went right down to the wire as Portlaoise have a shot to possibly steal the game with three seconds left on the clock.

The step up to National League has been a wake-up call for the Portlaoise men and trainings have intensified and new recruits have been added to strengthen the panel. The addition of Gediminas Sevelis to the squad will be welcomed as he brings a wealth of experience with him.

But coming up against a youthful Sligo All Stars side was going to test the full squad throughout the game. Sligo got out of the blocks quickly and drained the first two three pointers of the game with Brockmann and Donnellan getting the scores. From past games Portlaoise were well aware of this outside threat but with Sligo’s big man Jesus San Martin attracting extra attention inside, the Sligo guards found themselves some open space to shoot from distance.

Portlaoise’s two Lithuanians started well linking up for seven points in the opening quarter. The home side’s speed was still causing problems for Portlaoise as they penetrated down the centre and continued to rack up the scores. The quarter ended with Sligo in the lead 19-15.

Portlaoise settled more in the second quarter and again both Vilimas and Sevelis were attacking the All Stars defence and keeping Panthers within toughing distance. Timothy Stewart began to find his feet in the game and went on a run of seven points in succession.

But Sligo continued to find room outside and matched Portlaoise score for score hitting three three pointers in a row, Brockmann continuing to feel at home in the gym. A flurry of scores inside the key from Stewart and Vilimas brought the game to within three at the half time buzzer.

The third quarter was another closely run affair as the youngest member of the panel Trevor Swayne stole the ball and finished strongly to the basket. He followed this up with a three pointer from the corner. For every score Portlaoise put up Sligo came straight back down the other end and pegged it back. Portlaoise continued to work hard in defence but found the quick passing offence of the All Stars very hard to deal with.

Open opportunities were being taken but luckily Mantis Vilimas was in excellent form as he continued to dominate inside on offence. Right at the end of the third Portlaoise closed the gap to four points following a through the legs pass by David Glynn to Peter Duignan who finished under the board.

With only four points between the sides the game was still there for the taking. Both teams looked to make an immediate impact and it was the home side that got the first score. With Timothy Stewart being kept quiet for his high standards Portlaoise needed someone else to step up, and Vilimas was the man to keep Portlaoise ticking over.

The Lithuanian was the go-to man all day and he again put in a big last quarter scoring twelve of his side’s fourteen points in the quarter. Portlaoise had to go deep into their bench late on as fitness began to show and with under a minute to go the visitors found themselves seven points down.

Their never give up attitude saw them force a quick turnover with Mantis Vilimas finishing the fast break lay-up and made the and-one to bring it to within four points. Again with the clock winding down another steal and a foul brough Sevelis to the line and he hit two from two.

With seven seconds left Portlaoise again turned over Sligo All Stars and got the ball to the hot hand Vilimas who got a great look from three point range but unfortunately it wasn’t to be.

Sligo ran in a late basket as Portlaoise pondered what might’ve been. The Portlaoise men can be proud of their performance but will have to regroup quickly as they face off against a very strong Killarney side next Saturday night as part of a double header in St Mary's Hall.