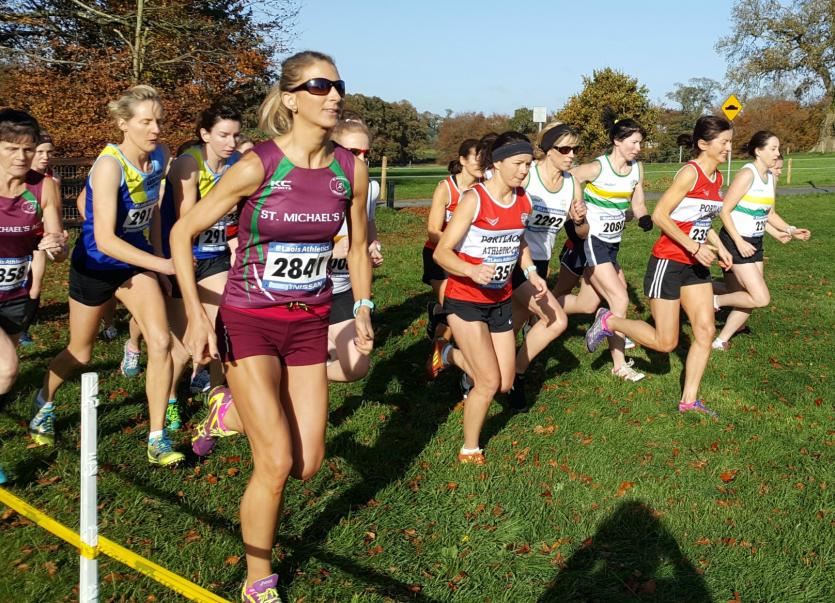 The Masters Ladies race gets under way at the weekend.

The third round of Laois Athletics cross country racing for 2017 took place on Sunday in the picturesque surroundings of Emo Court.

Included in this event was the Masters Race for athletes over 35, the Junior Race for athletes 16-19 years of age, and the Development Races, which are for all juvenile athletes from U-10 to U-16 who have not yet won a cross country medal at county level this year.

Given the picturesque location, this was always going to be an event worth attending. When a great location like this is combined with the sort of weather conditions that we got on Sunday, all the elements are in place for a great day of running, and that’s exactly what we got.

As with the previous two cross country events, the day started with a non-championship race for U-8s. These U-8 races are put on by the host clubs, in this case by Mountmellick and St. Michaels combined. The young athletes had to navigate a 500m course, with medals for the first ten across the line.

In the U-12 girls race Niamh Peake of Rosenallis-Kilcavan was a clear winner, and not really put under any pressure. St Michael's Liam Ward fought hard in the U-12 boys and picked up the second gold of the day for the Portarlington club.

Showing her family’s racing heritage, and not to be outdone by her brother in the U-10 race, Mountmellick’s Michelle Conroy led her U-14 girls race from the start, and finished well ahead of the Ballyroan duo of Caoimhe Moore in second and Blathnaid Deegan in third.

As is becoming the norm in most sports these days, numbers in the older age groups started to dwindle a little, particularly in the girls events. The U-16 girls race had only three entrants, which was deceptive to watch as the very talented pair of Grainne Lalor of Rosenallis-Kilcavan and Grainne Cotter of St Michael's AC really only had one another to battle against, and so they ran a fairly processional race until the final sprint whereby Grainne Lalor came out the victor and took the gold.

In the boys U-16 race the first position changed a number of times between the top three lads. In the end, Charlie Hackett from St Michael's won gold, with Ballyroan-Abbeyleix athlete Andrew Kirk taking silver ahead of Mountmellick’s Anthony Conroy, who finished up in third place and took the third medal home from this event to the Conroy household.

The junior ladies race, like the U-16s had only three runners taking part over the 4km course. St. Abbans athlete Orla Davies took gold, with Portlaoise’s Amy Walsh in second, and Rebecca Balfe from Emo-Rath in third place. While the junior girls were on the course, the Master Ladies race also got under way. The master ladies run one and a half laps of the 2km course and had twenty three runners take part.

St Michael's Lisa Sweeney took the lead right from the gun, and she led the race from start to finish, showing her usual dominance of late. Collette English and Siobhan Burke took second and third overall and in the over 35 category. In the over 45 category St. Michaels again took the gold medal with Olivia Sheeran, who finish up in 6th place overall.

The master’s race normally includes categories for over 35 and over 45 women, but this year also included an over 55 category as well. Collette Brennan from St Abbans AC became the first female winner of this new age group for Laois Athletics.

The Junior men, of which there were nine competitors, and the Masters men all compete over 6km’s and so opted to run their races together. Like the women’s race, the men also had new age categories this year, with the addition of an over 55 and over 65 age group.

St Abbans stalwart Colm Burke, running barefooted, comfortably took first place overall which is no mean feat given the fact he was running in the over 45 category. Portlaoise AC’s Cyril Cuddy (O-35) finished second overall in a tight race with St Abban's Stephen Hunter (O-35) who was third.

Cian McDonald of Ballyroan showed his usual good form to finish the Junior men’s race in first place and he was followed home by Cathal Connaghton of Oughaval AC in second and Curtis Lee from Mountmellick in third.

The Masters Individual Results were as follows: