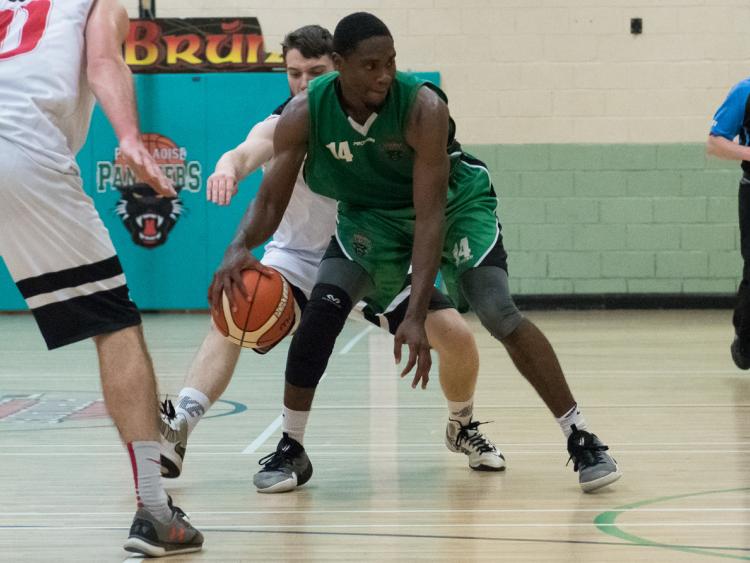 Portlaoise Panthers Black maintained their 100% record in all competitions on Sunday night with a win over Carlow Rock in St Mary's Hall.

The team were short in numbers with only six available to them, but they put in an excellent shooting performance to take the points over a tricky Carlow Rock side. Both teams played out a very entertaining game before Christmas where Portlaoise Black came back from a sixteen point fourth quarter deficit to win by three, so this reverse fixture was expected to run close.

Portlaoise Black stormed into an early lead courtesy of scores from Timothy Stewart and Peter O’Sullivan. With low numbers the Black team resorted to zone defence to make sure that they didn’t find themselves in early foul trouble.

This worked to their advantage as Carlow Rock went scoreless for the first six minutes of the game as they were closed out inside the key. They eventually found their range from deep with Linas Jusaitis and Simkus hitting the mark.

Portlaoise responded again with a second three pointer from O’Sullivan and another three points from Stewart to take a six point lead on a scoreline of 16-10 at the end of the first quarter.

The second quarter again started at a frantic pace with Peter Duignan coming into the game and quickly getting his name on the scoresheet. Jack Scully put in a big shift in this quarter getting out on the fast break to finish well and also used her size down low to increase the Portlaoise advantage.

Carlow Rock’s Simanavicius caught fire from the three point line to keep the visitors in the game scoring three from beyond the arc and adding a further two from a drive down the centre of the key.

Jamie Dooley was enjoying his stint as a guard and he too picked off two baskets floating the ball over the defence. O’Sullivan added another two three pointers before the half time break which gave his side a commanding twenty one point lead on a scoreline of 48-27.

Carlow Rock came out strong in the third quarter and began to eat into the Portlaoise lead. Armands Vikuls took advantage of some poor defensive rebounding and finished off two put-backs. He also got out on the break to punish Portlaoise turnovers and put the pressure back on the home side.

Panthers responded with some great mid-range shooting from Duignan and Dooley while Tim Stewart continued to make it look easy under the basket. Carlow Rock outscored Portlaoise Black in the third quarter but could only cut the gap to nineteen points heading into the final quarter.

Again the visitors were first out of the blocks with Portlaoise finding it hard to contend with the Carlow bigs inside. While the three pointers dried up on both ends of the floor the game became more physical as the big men from both teams went toe to toe. Lozek and Rolands Vikuls were causing damage inside for Carlow Rock and got the lead down to eight points midway through the fourth.

Portlaoise responded with a lovely basket by Jack Scully as he turned his defender and finish strongly at the rim. A basket by Stewart and two three pointers in the last two minutes for Portlaoise killed the game off and gave Panthers a deserved win to continue their winning streak.