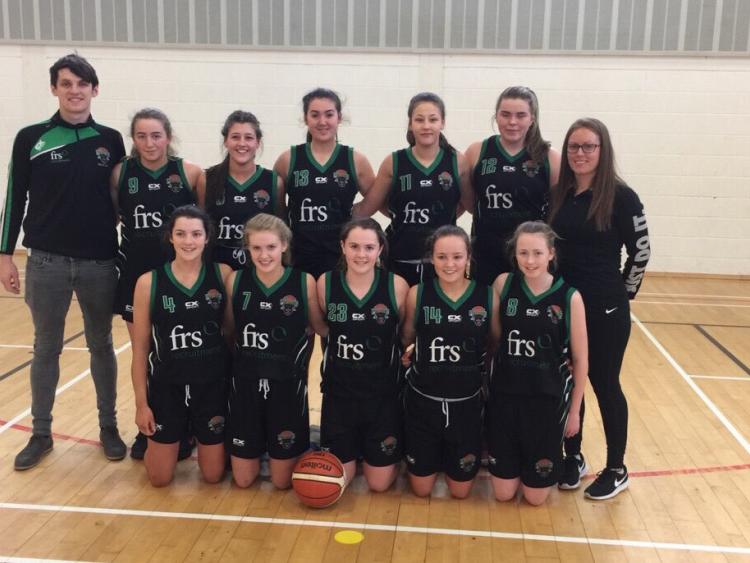 The Portlaoise Panthers U-16 girls team which competed in the Galway Titans tournament recently.

The Portlaoise Panthers U-16 girls travelled to Galway on Saturday last to take part in the Galway Titans Invitational Tournament.

This was a four team event with each team playing in a Round Robin format. Up first for the girls was Maree, a local team who the girls have come up against in the past.

With Maree missing a couple of their starting five Portlaoise took advantage from the start and opened up a seven point lead in the early minutes. The trip down taking nothing out of the girls, they continued to work hard and had the game sewn up by half time.

The second half allowed the girls to work on different aspects of their game to take into the remaining fixtures. The game ended Portlaoise Panthers 64, Maree 12

Next up for the girls were hosts Galway Titans. This was a tighter affair to start with, as Titans took an early lead and the Portlaoise girls looked tired. However, they found a new lease of life and started to close the deficit.

A change in personnel and in tactics worked a treat and the girls had turned the seven point deficit early in the first into a 15 point lead at half time. The girls maintained this lead throughout the third and managed to extend it in the last. They were now set up to play one of the top teams in the country in Liffey Celtics in the final game.

The girls only had a 20 minute break between their second and third games but this seemed to work as an advantage to them as they brought their momentum from the Titans game into the final game.

They were immense in the first quarter, the pressure being applied to Liffey Celtics was something they had no answers for, and the girls capitalized on every forced turnover with quick movement and precise passing opening up the floor and allowing for easy layups and wide-open outside shots.

Liffey Celtics were left stunned but they have the talent and experience and we knew that they would come back fighting in the second, and this was the case. Tired legs started to set in for the girls and they allowed Celtics in for some scores which had been closed out early.

A timeout and tactical change meant the girls were now set up to continue to pressurize their opponents into mistakes again. The girls led by ten at half time.

The third quarter was a well-matched affair with both teams scoring 10 points and neither willing to allow the other to take control of the game.

Into the final quarter Celtics started the better and had the lead pulled back to only five points after just two minutes. The Portlaoise girls had a battle on their hands for the closing minutes and they failed to disappoint, as they brought back the determination and fight they were showing in the first and managed to hold their opponents to just four points for the remainder of the quarter while putting up 14 themselves.

Portlaoise hosted Kestrels on Sunday afternoon in St Mary's Hall for the next round of U-14 Midlands League games.

Portlaoise started off the better with a three point play by Niamh Friel quickly followed by a lay-up by Emma O’Sullivan. Ashling Fleming moved the ball fast in offence allowing Isobel Duff to make and take a score of her own.

Kestrels pulled back a score of their own through Kathy Crowley before Aimee Lewis’ hard work in defence allowed her to turn defence into offence and claim another score for her side. Portlaoise lead by eight at the end of the first quarter.

The second quarter was played in the same vein with the introduction of Neassa Towey and Faith Umeh who kept the tempo of the game up.

They both used their speed and agility to clock up a further 10 points between them in the quarter. Kestrels also found it difficult to contain Eimear Marum who attacked the basket at every opportunity, while Keeva Fingleton and Amy O’Sullivan kept the Kestrels defence on their toes with great movement during offence.

At the half time whistle Portlaoise held a commanding lead.

The second half continued with Portlaoise dominating all over the floor. Eimear Marum was fouled at the basket and awarding two free throws which she slotted away.

Portlaoise found more scores through Keeva Kingleton when a weaving drive to the basket resulted in a score plus a free throw which she floated in from the line.

Kestrels never dropped their heads and battled hard for the entire game but the Portlaoise girls proved too strong on this occasion.

The Portlaoise boys U-14 basketball team played host to Ballyroan in the Midland Area League competition.

As the quarter went on both teams were playing well, exchanging baskets, Aaron Dooley and Amaan Sanni kept the scoreboard ticking over to see the home team lead by four points.

The second quarter saw a new five players from each club take to the floor and it was the Portlaoise lads who hit the ground running with good baskets coming from Jack Byrne and their captain Dylan Cahill.

Portlaoise continued to dominate with good work from Cillian O'Connell and Eoin Murphy. As the half-time whistle approached they opened up a 12 point lead thanks to baskets from Barry Fitzpatrick and Jack Byrne.

The second half saw Ballyroan come out strong to get the first couple of baskets but as the game went on, Portlaoise again upped the tempo with quick movement of the ball resulting in baskets from Jason Alade and Brochan O'Reilly who put 10 points on the scoreboard in this quarter alone.

As the quarter went on the home team continued playing well with good work from Matthew Coonan and ball handler Cillian O'Connell.

The last quarter saw both teams relax with the final outcome in little doubt, both teams were playing well, exchanging baskets, Dylan Cahill and Jack Byrne kept the scoreboard ticking over for the home club.

Portlaoise went on to control the game with good performances from Eamonn Sam Rahi and Eoin Murphy to help their team go on to a well deserved win.