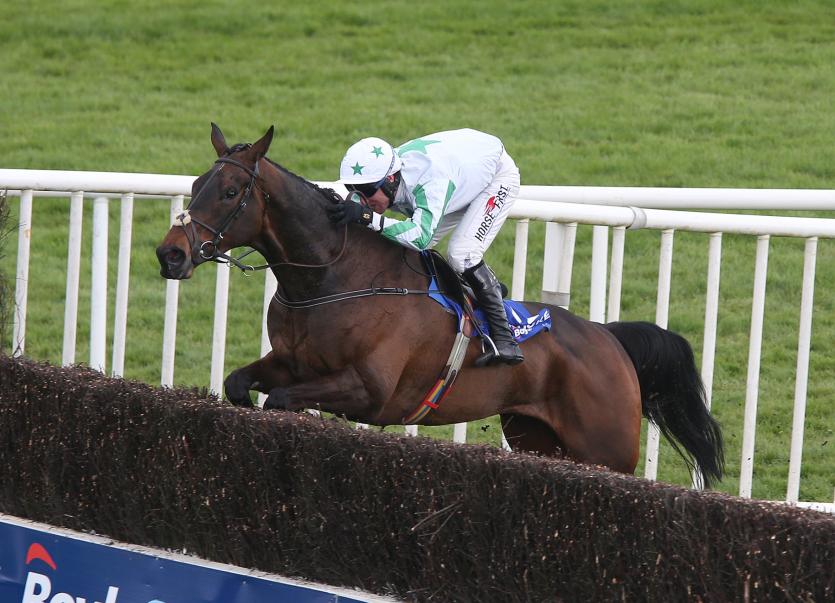 Our Duke in action at the at Fairyhouse in 2018.

Laois-bred racehorse Our Duke heads the weights and the 97 entries for the 2018 BoyleSports Irish Grand National at Fairyhouse with the possible of a historic double on the radar.

This time around if he is to complete back-to-back BoyleSports Irish Grand Nationals – a feat not achieved since Brown Lad, for Jim Dreaper and Tommy Carberry, won in 1975 and 1976 – he will have to carry the welter-burden of 11-10 to success.

Twelve months ago Our Duke, the 9-2 favourite, brought the house down at Fairyhouse when turning the famous handicap into a procession. He was among the breakaway front rank for most of the race but while his fellow front runners wilted on the turn for home, Our Duke and Robbie Power just went further and further away, eventually winning by 14 lengths.

This was a notable success for the Cooper family who farm and breed from a small number of mares on the edge of the Slieve Bloom mountains in Laois.

Trainer Jessica Harrington says Our Duke runs off a mark of 166, 13lbs higher than his winning mark last year.

“While the Cheltenham Gold Cup is the immediate target, the BoyleSports Irish Grand National is very much on the radar. His owners, the Cooper Family Syndicate, had the day of their lives at Fairyhouse last Easter Monday and will never forget the rapturous reception he received,” she said.

“The market is wide open at the minute but Thyestes winner Monbeg Notorious is seeing a lot of the early money at 14/1 having followed up at Navan at the weekend. It’ll be fascinating to see if Willie Mullins can break his hoodoo in the race this time round and he has a host of entrants at 16/1 including Invitation Only, Total Recall and Kemboy, the latter of which already has a Fairyhouse win under his belt this year.

“We are once again delighted with the quality and depth of entries for the BoyleSports Irish Grand National. It is great to have last year’s winner Our Duke heading the weights along with this year’s Irish Gold Cup winner Edwulf. The race has attracted a host of this year’s top novices including Shattered Love who will be bidding for a Grade 1 Novice Chase and BoyleSports Irish Grand National like Our Duke in 2017.”