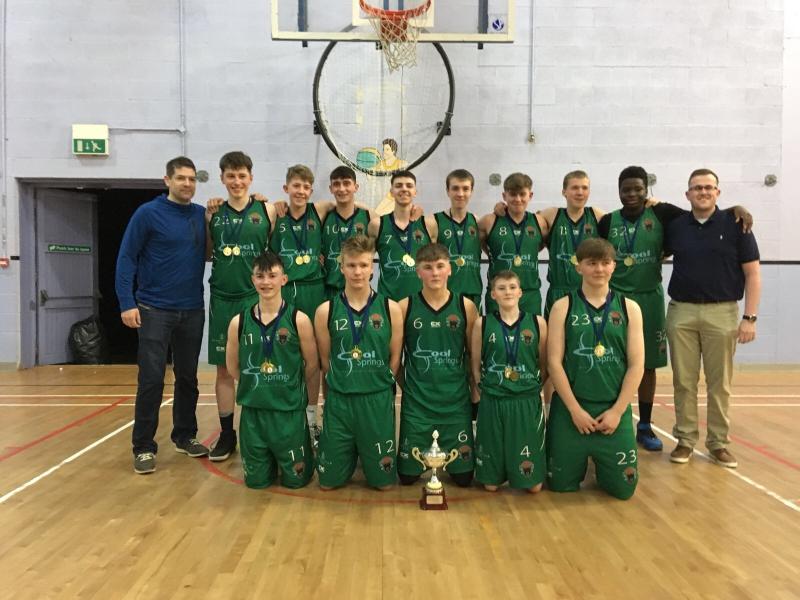 The Portlaoise Panthers U-18 boys team.

Portlaoise Panthers U-18 Boys rounded off a record breaking weekend for the Midlands Club at the Juvenile Top 4 Finals in Portarlington.

They secured the clubs seventh cup of the weekend with a 65-44 victory over the home team and local rival Kestrels.

Colaiste Iosagain was alive to the sound of basketballs on the wooden floors and tarmac from dawn till dusk over both days. And what a feast of basketball it was, with a display of fantastic talent, fervent support and lots of colour. The future looks very bright indeed for basketball in the Midlands.

Portlaoise vs Kestrels has been a great rivalry over the past decade in underage ranks and this year proved no different. Portlaoise jumped out of the blocks in the early stages with captain Rian O'Connell leading by example, as always, and scoring the opening nine points as Panthers looked to do damage inside from the outset. They raced into an 11-3 lead to start the game.

Scott Higgins responded for Kestrels with six points of his own. Panthers intense defence forced some turnovers and some excellent finishing from Trevor Swayne, James Phelan and Pierce Bolger Hinds pushed the Portlaoise team into a 20-8 lead to finish the opening quarter.

The duel of the night was taking place between the two mercurial point guards, Gary Morrissey from Panthers and Rioghan Murphy from Kestrels. The two diminutive ball handlers dazzled the crowd with spin moves and crossovers and scintillating speed to ignite their teams on either end.

Swayne attacked the basket relentlessly, finishing with a couple of exquisite drives. Kestrels forward Higgins was proving a handful and Jamie Muldowney kept the scoreboard ticking over and Kestrels in the game with some fancy footwork and a couple of smooth flushes of his own. Portlaoise led 32-17 at half time.

The nature of these local derbies is that momentum changes very quickly throughout the game, and Kestrels were definitely going to make a run and it came in the third quarter. Some sloppy turnovers from Portlaoise were jumped on by Murphy and Adam Kavanagh and Kestrels started to claw their way into the Portlaoise lead.

This Portlaoise team has some fantastic leaders though and after a forced timeout O'Connell and Morrissey settled the ship and Panthers again put some distance between the teams. Phelan added a couple of nice baskets to leave Portlaoise 49-30 ahead heading into the last quarter.

Rian O'Connell continued his scoring spree in the fourth quarter finishing with 27 points in a performance of real quality and maturity. The teams went basket for basket in the final period and Kestrels couldn’t quite bridge the gap despite a valiant effort. It was a great exhibition of basketball from both teams and testament to the growing strength of basketball in the region.

Well done to both teams for putting in such a fine performance. Panthers move on to the prestigious Billy Kelly tournament on Easter weekend where they will cross swords with the powerhouse names of Irish basketball including Neptune, Blue Demons, KUBS, Moycullen, Belfast Star, Dublin Lions, UCD Marian & Fr Mathews to name a few.

It promises to be another exciting weekend of basketball.