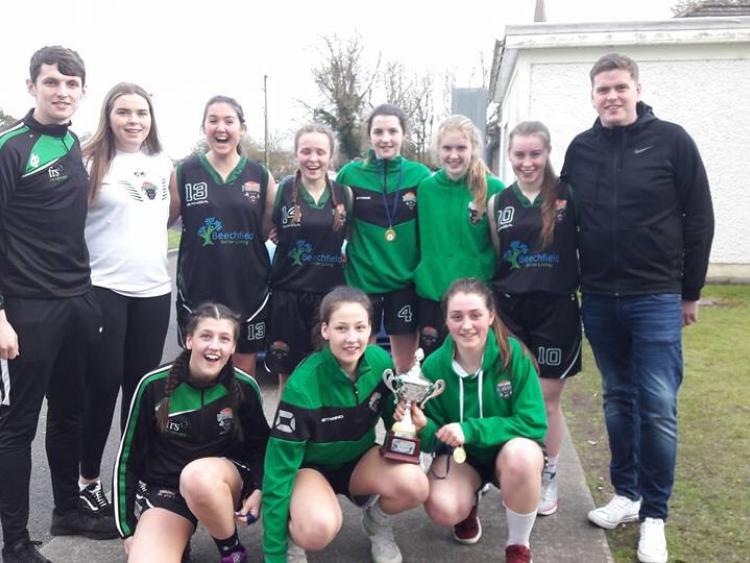 The Portlaoise Panthers team which won the U-18 girls top 4 title.

On Sunday Portlaoise made the short journey to Portarlington to take on Clonaslee in the Top 4 finals.

Portlaoise started the game at a ferocious pace and opened up a lead Clonaslee struggled to close. Portlaoise's three internationals Maeve Phelan. Shauna Dooley and Ciara Byrne all played a huge role in opening up a quick ten-point lead. The first quarter ended with Portlaoise leading 16-4.

As the second quarter started Portlaoise Coaches Jack Scully and Jack Dooley should the depth they had at their disposal with subs coming in every minute, because of this their tempo never dropped.

Portlaoise continued to push the ball at every opportunity with Shauna Mulhall and Rebecca Reddin finishing off some lovely moves. Clonaslee continues to battle hard but unfortunately couldn’t close the gap. Portlaoise finished the second quarter leading 27-8.

The third quarter began and Clonaslee went on a 6-0 run, Captain Maeve Phelan then took charge of the game. With her passing and dribbling skills, she found her team mates in great positions and they finished strong.

Ellen Garvey and Jade Burke were fresh off the bench and kept Portloaise ticking over. The quarter ended with Portlaoise leading 38-14.

The fourth quarter was a quiet affair, with most of the Portloiase squad playing in the next game the tempo dropped and Clonaslee pounced on their opportunity. They won the last quarter on a scoreline of 10-2 but unfortunately it wasn’t enough as Portlaoise ran out 42-24 winners.

Image by Karolina Grabowska from Pixabay

The N80 junction in Mountmellick, Laois