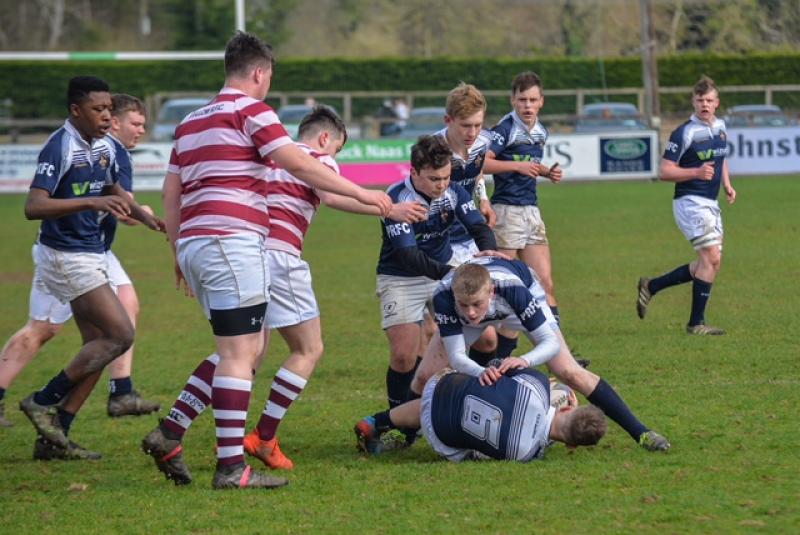 Ethan Hussey supports Tadhg Mullen against Tullow at the weekend.

Portlaoise U-17s secured their place in the Leinster Plate final to played next Saturday in Donnybrook thanks to this win over Tullow at the weekend.

The Laois lads started the game with intent and following a great run the big Portlaoise number 8 Adam Duffin off loaded to Jay Buggy who scored in the corner. The try was converted by William Reilly.

Portlaoise had to defend for the next ten minute due to their failure to secure the restart from the try. They cleared their lines and moved up the pitch when some terrific link play between Allan Connolly and William Reilly saw Connolly put through a lovely kick for Reilly to touch down.

Unfortunately the try was disallowed as the referee blew it up a bit early, giving Portlaoise a penalty for a high tackle on Connolly. The ball was dispatched to touch for an attacking line out. A training ground move from the line out saw Adam Duffin cross for Portlaoise’s second try. This was converted by Reilly.

Portlaoise continued to pile the pressure on Tullow, who had competed in the Division 1 final the previous Saturday and lost out to Kilkenny.

Brian Dunne the big Portlaoise first center was causing havoc in the Tullow defense. He broke up the field and off loaded to Nebojsa Kukic who was just denied a score. The ball was quickly recycled and Paddy Coss had work to do but managed to cross for the try, which Reilly converted.

Tullow attacked on the stroke of half time but a crunching hit from Adam Duffin and saving tackle from Jay Buggy brought that effort and the first half to an end, which saw Portlaoise lead 21-0.

The second half started in the same vein with Portlaoise piling pressure onto the Tullow defense. A brilliant individual effort from Adam Duffin saw him cross for his second try, which Reilly converted.

All the Portlaoise panel had game time at this stage and positions for the upcoming finals were up for grabs. With this in mind the guys that came in at half time had a point to prove, and following some intense pressure from the Portlaoise back-row of Robbie O'Rourke, Tadhg Mullen and Adam Duffin, they turned over the ball, Brandon Nolan pounced and crossed for the first of his two tries which, were both converted again by William Reilly. Portlaoise finished off with tries from Allan Connolly and Jay Buggy’s second to leave the final score at 52-0.

This was a polished performance by Portlaoise which saw an impressive six kicks converted out of eight for their captain William Reilly. There were many candidates for Man of the Match with good performances from Allan Connolly, Nebojsa Kukic, Jack Rouget, Tadhg Mullen, Brian Dunne, Ethan Hussey and Daniel Whelan, but this accolade has to go to the number eight Adam Duffin, who has the potential to be the best number eight at this age group in the Leinster League.