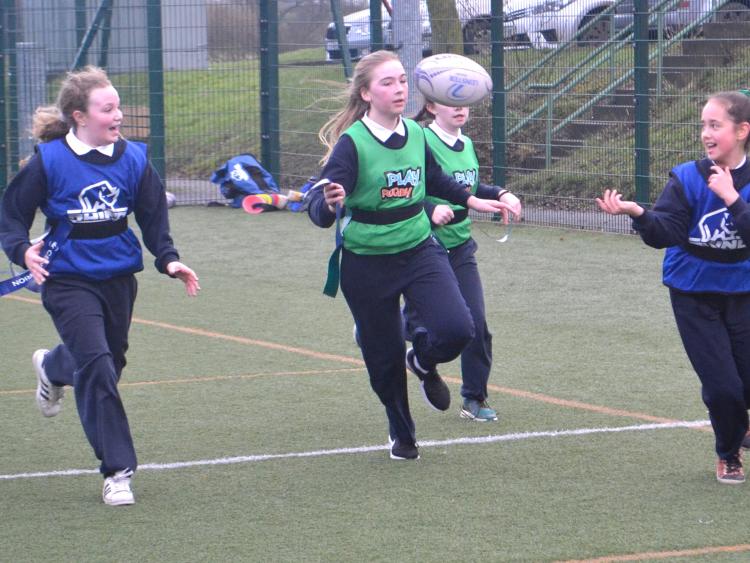 Portarlington, like most rural towns, has always had sport at the heart of the community. Individual and team achievements are celebrated by the entire community with great pride and the town boasts vibrant clubs for all of the major sports.

However, until recently, the availability of team sports for girls lagged far behind what was on offer for boys. But a new focus in the local girls primary school on physical activity coupled with a hard working CCRO means that rugby is playing a leading role in Portarlington’s efforts to redress this gender balance in sport.

“It was frustrating for parents” explains Portarlington RFC CCRO Pádraig Mahon who also acts as the club’s Director of Rugby. “They wanted to see their daughters involved in sport and so they brought them along to u8s training at the local rugby or football club. 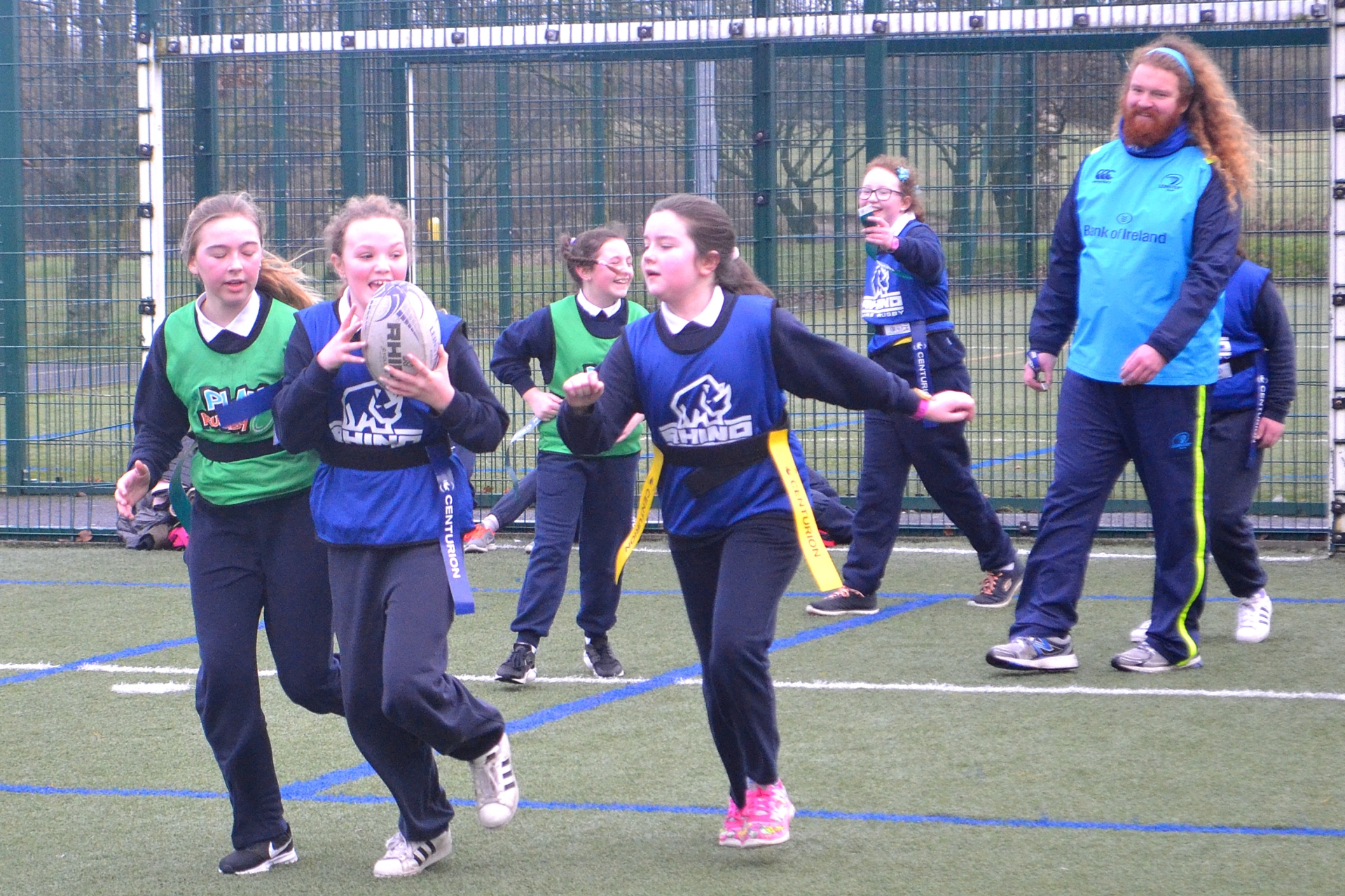 “Coaches would welcome them and they would develop their skills and interest in the sport but after a few years, with no dedicated girls teams to progress to, the girls would lose interest and when they needed it most during their teenage years, sport was just a thing of the past for them.

“As concerns grew around the health and well being of our young people this just simply had to change and I’m very proud that Leinster Rugby and Portarlington Rugby Club have played a central role in the hugely positive changes that now allow girls to make sport an important part of their lives”.

Portarlington RFC now field girls teams at U-14s and U-16s as well as an amalgamated team with Cill Dara RFC at U-18s. These two clubs’ senior women also make up the Midlands Falcons team that competes in the Leinster League

In fact, the club is now having to deal with what Mahon calls “quality problems” such as funding new changing facilities for girls and women’s teams because of the boom in playing numbers. The progress that brought them to where they are now started when Mahon ran the club’s first Summer Camp in 2012 and offered a 50% discount for girls.

There was a hugely positive response from the community but there would need to be continuity in the encouragement of girls beyond this one week event and Leinster Rugby’s CCRO programme provided the perfect companion to the club’s desire to offer girls a positive sporting experience.

Club Community Rugby Officers are employed by Leinster Rugby and the local club to deliver An Introduction to Rugby classes in primary and secondary schools while also running school blitzes and coaching school teams.

One of the schools in Portarlington that embraced this offering was Presentation Primary School for girls. In fact, the school was already developing a very proactive physical activity programme and so tag rugby added an extra element to this with the extra bonus of offering club based team sport to girls who wanted to ‘give it a try’.

Presentation Primary School has recently invested in new facilities and their principal Cathal Ruane explains the importance of these to the school’s ambitions around physical activity. “We are very fortunate to have a range of facilities in our school, indoor halls, playing pitch, running track, playground and tarmac courts. These facilities have led to a huge increase in our pupils daily physical activity levels. Having such a range of facilities allows us to be less weather dependent which means we can consistently give our pupils opportunities to be physically active and build life long positive healthy habits”.

And he explains his reasons for welcoming the local rugby club’s input saying “Team sports are extremely important for girls and for their continued participation in sports into adult life. By participating in team sports young people are given opportunities to develop life long skills such as co-operation, hard work, the value to camaraderie, how to cope with success and indeed failure and most importantly have fun along the way”.

The time that Pádraig Mahon and his predecessors have invested in Pres Primary is clearly paying off as Mr Ruane tells us that the CCRO is now seen as part of their team “Páidí is an extremely valued member of our PE team and the programme we deliver to the girls.

“His knowledge base and enthusiasm has been very effective in the promotion of the games strand of the curriculum and allowed our girls the opportunity to develop their rugby skills, game playing ability and they thoroughly enjoy the sessions”.

There was very visible evidence of the success of this programme in Portarlington recently as Mahon ran a 5th and 6th class blitz for over 250 girls from local schools.

It is wonderful to see this level of cooperation between our clubs and their local schools. This can only lead to better opportunities for children to develop a love for sport and Leinster Rugby will always be working to ensure that anyone who wants to play our game is welcomed. And for girls rugby in particular we are looking to ensure that clubs and schools have all of the resources that are needed to maximise the potential that all children have to enjoy being a part of a team, a club, a sport.

Portarlington’s Kate Tynan who captains the Midlands Falcons team only took up rugby when she was seventeen. She is enthused by the work being done throughout the community to develop girls’ sports and she feels that the women’s team will begin to benefit from this very soon.

“Girls are taking up the game much younger than I did. With three girls teams fielding at youths level and the cooperation between Portarington and Cill Dara developing, we will start to see significant numbers of players progressing to senior level in the next couple of years. This will be a huge boost for us”.

Women’s World Cup Tournament Director Garett Tubridy was always conscious that the legacy of the tournament and the impact that it could have on girls and women’s rugby in Ireland would be far more important and far reaching than the tournament itself.

Garrett told us “In planning the tournament, we put a lot of work into legacy and had three main programmes: To get 2017 in 2017 (2, 017 new female players registered in 2017), an 'Ambassador Programme" - to bring in new volunteers into the Women's game; and the Trophy Tour, where the Women's Rugby World Cup trophy visited 275 clubs and communities in 32 counties prior to the tournament. The Trophy Tour really brought the tournament alive for kids”.

“I think that the fact that we had the most TV viewers, the highest level of social media engagement, and the best attended  Women's Rugby World Cup ever was largely attributable to these  legacy programmes. I hope clubs such as Portarlington and communities and schools in the area, will increasingly see rugby as an option to keep girls fit and playing sport”.

Clubs like Portarlington and schools like Presentation Primary have made it their mission to increase the levels of physical activity undertaken by girls. They have ensured that girls can enjoy positive team centred sporting experiences in a safe environment but they are also laying out a path for young girls to follow that will allow them to make sport an integral part of their lives into adulthood regardless of whether they become the next club player in Portarlington or the next star of Leinster and Ireland’s women’s teams.

- This article first appeared in the match programme for the Leinster v Saracens game in the European Champions Cup quarter-final.