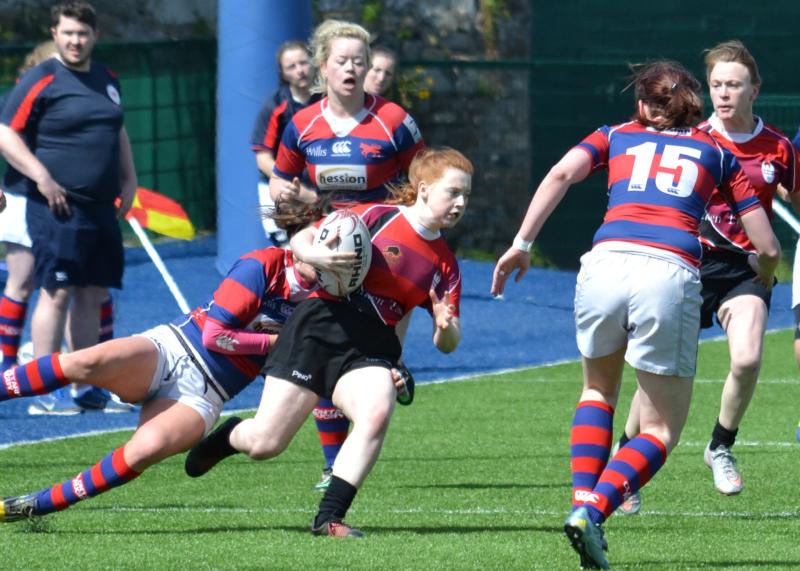 After a comprehensive victory over Portlaoise in the recent league final, the women of Portarlington and Cill Dara rugby clubs travelled to Energia Park Stadium in Donnybrook to take on Clontarf RFC in the Leinster Plate Final.

And it was the amalgamated side that came away with their second trophy this month thanks to tries from Caoilfhionn Culliton (2) and Vivienne Keary.

The early passages of play saw both sides looking to keep things tight as they attempted to wrestle control in a game that meant a lot to both teams and the large crowd of supporters. And it took until the fourteenth minute before the deadlock was broken.

The Falcons worked their way deep into Clontarf territory and having won a penalty, captain Kate Tynan called for a scrum from which she fed out half Hannah Mulcahy who put Culliton into space and the centre powered into space to score her first of the day. Mulcahy added the extras and the Falcons led 7-0.

And it wasn’t long before Culliton had her second score. From the restart the ball was moved wide to Falcons’ impressive winger Orla O’Donovan who sliced through the ‘Tarf defence before offloading brilliantly in contact to Culliton and the Portarlington player sprinted clear to touch down under the posts again. Mulcahy slotted the conversion and the Falcons’ lead was doubled.

Only three minutes later it looked like the Falcons would extend that lead further when centre Vivienne Keary stepped her opposite number expertly before making a surging run from half way and into the Clontarf twenty two. Despite being tackled Keary popped a pass to full back Aoife Murphy but the cover defence brought her to ground and forced a penalty for holding on.

On Twenty three minutes Clontarf showed the first signs of a fightback as their centres Rebecca Sullivan and Donnla O’Hagaan combined brilliantly to break the Falcons’ line and although it came to nothing, this passage of play seemed to awaken some much needed confidence in the Dublin side.

And momentum seemed to swing their way when five minutes later Mona Homenco and Julia Bauer powered their way into the Falcons’ twenty two where they won a scrum for a knock on in the tackle.

From this set piece Niamh Keaveney and Sorcha Maguire drove their side towards the line but after Grace Carroll was held up short an impressive turnover from Andrea Broughan allowed the Falcons to clear their lines.

It looked like the Midlanders would make it to half time with their clean sheet intact until the last play of the half saw Lisa Beth McCoy stepping her way into space and when her pack took the ball through quick phases they had sucked in the opposition defence and this allowed out half Keaveney to move the ball wide to full back Angela Dwane who finished comfortably to reduce the lead to nine points at the break.

The second half couldn’t have started better for Clontarf as their pack again engineered their way deep into Falcons’ territory before moving the ball out to Rebecca Sullivan who scored close to the posts and her side was now only chasing a two point deficit.

For the next ten minutes Clontarf pilled pressure on their opponents with a series of cohesive multi phase moves that saw them owning the ball and controlling territory, but the Falcons dug deep and their collective defence kept its shape with Laura Oakley, Sarah Pickford and Andrea Broughan making a series of punishing tackles that kept the resurgent Clontarf pack at bay.

And this resilience was rewarded on fifty four minutes when Culliton broke from deep and fed Aoife Murphy who drew the defence before finding Keary with a well timed pass and the centre who was impressive throughout the contest crossed the line to the delight of the Falcons’ supporters.

This setback didn’t phase Clontarf though as they continued to pile pressure on the Falcons. However, again the defence remained composed and offered no space which forced the attacking side to go wide where they were met with aggressive line speed which saw players being isolated in possession and led to turnovers that allowed the Falcons to relieve the pressure.

With only three minutes remaining and the Falcons’ defence refusing to give an inch, it looked like they would hang on but from a five metre scrum Clontarf reset their attack quickly after a first phase move and this time when they went wide they found the space and the score that they craved.

However, the fact that they had been forced to attack out wide meant that the conversion was a difficult one and the kick that would have tied the game fell short. 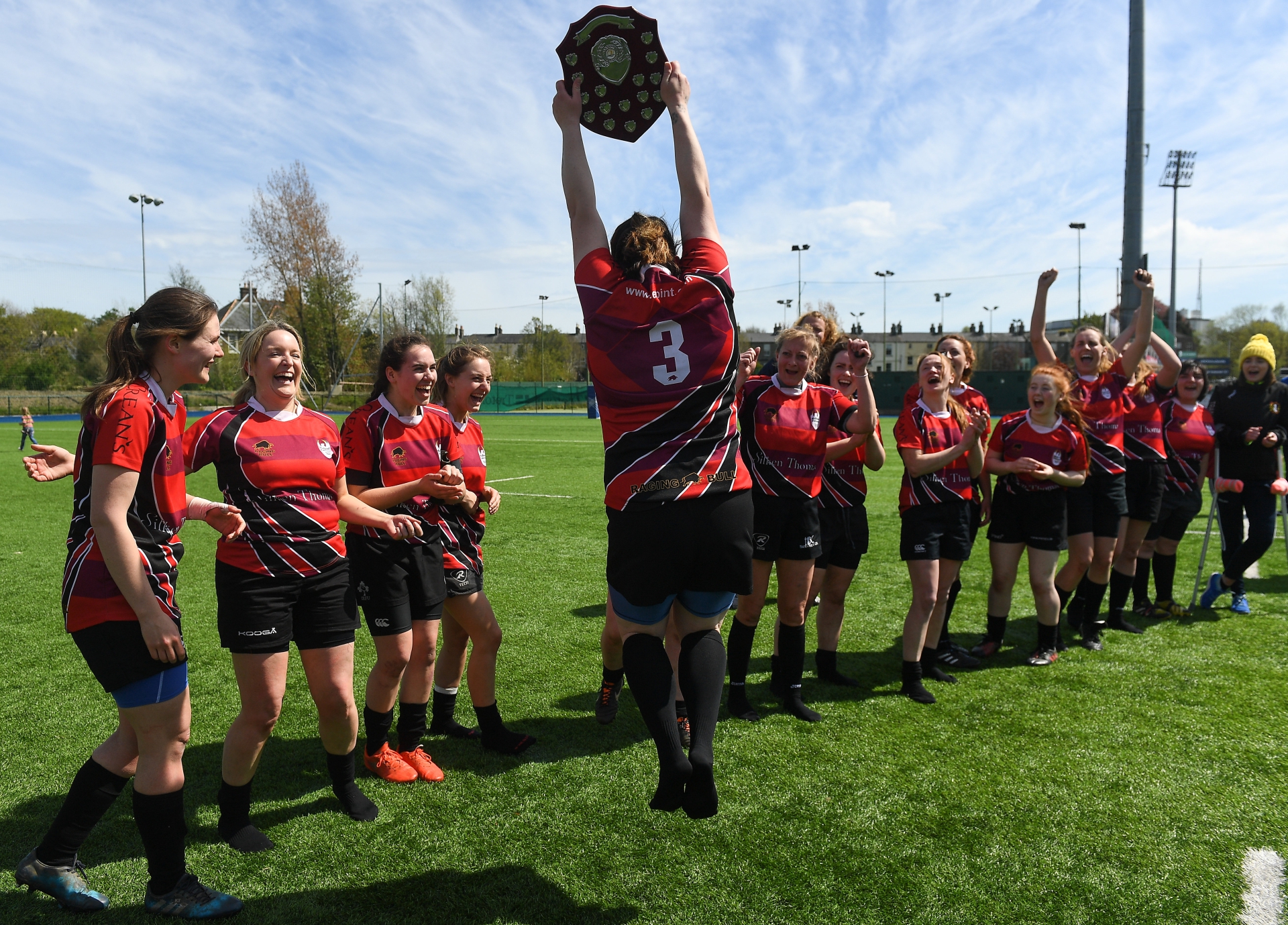 Clontarf needed to get within striking distance again and from the restart they moved towards the target but another Laura Oakley turnover allowed O’Donovan and Mulcahy to combine brilliantly down the ‘Tarf sideline and although tackled into touch, the Falcons had gained valuable territory with only a minute remaining.

From the resulting lineout the evergreen Pickford rose highest to steal the ball for the Falcons and her pack then drew a penalty in front of the posts which gave Mulcahy the opportunity to wind the remaining seconds down before raising the flags with her kick and the final whistle saw her teammates and their supporters celebrating a second trophy in just three weeks.

This has been an incredible season for the Falcons and their coach Cassie Dunne, who came out of retirement to sub during this final, will be delighted that she has managed to overcome the logistical and integrational challenges involved in an amalgamated team to lead them to this impressive double success

She will be hoping that the achievements of this campaign will allow further recruitment during the summer and the dramatic improvement that her coaching has brought to every player would suggest that it wont take this young coach long to bring new players up to the standard required to push for places in her team.