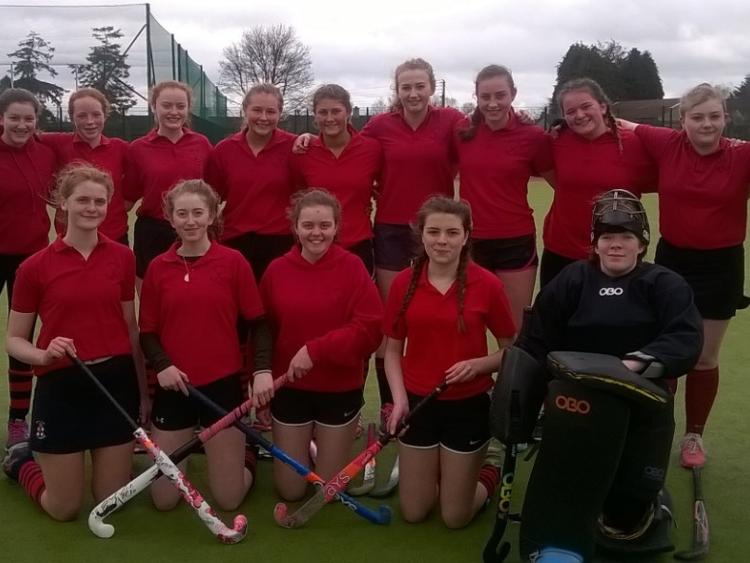 The Abbeyleix U-16 ladies hockey team.

After the high of their recent league playoff win, it was back to cup action and the close of the hockey season for 2017/2018.
Abbeyleix U-16s came up against a strong Newbridge team, losing 3-1 in a very good game of hockey.

While Una Rafter's goal at the end last week was the winner, her goal this time, also with time running out, turned out to be a consolation.

Again, there were great performances from the Abbeyleix girls, who kept going to the end and probably played their best hockey of the season as they chased down Newbridge, who lead 2-0 at half time.

Team: Rachel Fitzpatrick, Caoimhe Byrne, Andrea Caldbeck, Emma Alexander, Inez Looney, Daisy Jay, Flo McDonald, Jessica Shirley, Ellie Culliton, Fay Bryan, Sarah Clegg (Captain), Una Rafter, Nicola Roe, Jess Barrett, Grace Kerfoot. Coach Liz O Brien
---
The U-14 team travelled to Loreto in Kilkenny and took on Carlow in the WL Plate competition. After an even first half with score at 0-0, Carlow edged the second half with three goals, while Abbeyleix never reached the heights of earlier matches.
Abbeyleix U-14 girls can feel proud of their achievements this season with lots to build on for the new season in September.