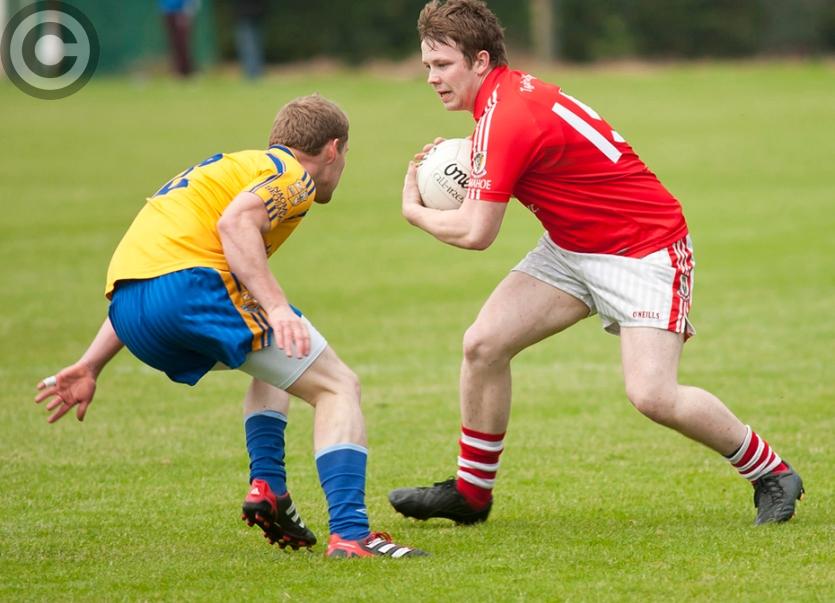 A last-gasp Ruairi O’Connor free in the second minute of injury-time proved the difference in this ecounter, as fourteen-man Timahoe got the better of St Joseph’s by the narrowest of margins in Ratheniska on Sunday morning.

Timahoe were quick off the mark, taking less than thirty seconds to open the scoring through Robbie Foyle’s sharp effort. Their lead wasn’t to last long too long though, as Conor Kealy opened the St Joseph’s account before edging them ahead with just three minutes played. Timahoe got back on level terms through Ruairi O’Connor before Robbie Foyle and Bernard Wheatley traded points with just over ten minutes on the clock.

The only goal of the game arrived soon after when corner-back Richie Oxley marauded forward to fire past Danny Nelligan and rattle the St Joseph’s net with fourteen minutes elapsed.

Timahoe increased their lead further through James O’Connor’s pointing, with Ruairi O’Connor also converting a free to increase their cushion. Twenty-five minutes in the game took a twist as Richie Oxley was given his marching orders and Timahoe were reduced to fourteen men.

St Joseph’s narrowed the margin through Peter Kealy to close out the scoring for the half as Timahoe went in four points ahead at the interval on a scoreline of 1-5 to 0-4.

The second half got underway with a brief shemozzle resulting in a handful of yellow cards. When the play resumed, St Joseph’s staged a revival, with Murtagh Condron firing over a brace, one from a free and one from play, followed by a James Smith point to close the gap to the minimum with thirty-seven minutes played.

A thirteen minute scoreless period followed, before a Peter Kealy free drew the sides level ten minutes from time. A nervy final few minutes ensued before Micheal Kennedy split the posts to push Timahoe into the lead a minute from time – but there was still time for St Joseph’s to draw level through a fine effort from Peter Kealy on the stroke of full-time.

In a dramatic finale, Ruairi O’Connor held his nerve to convert a free in the second minute of injury-time and seal a win for Timahoe.

Timahoe will need to improve a lot the next day out when they go toe to toe with the team they beat last year Courtwood, who have been much more impressive so far this year. St Joseph's face Portlaoise in the qualifiers, which could be an exciting affair between the two best second string teams in the county.