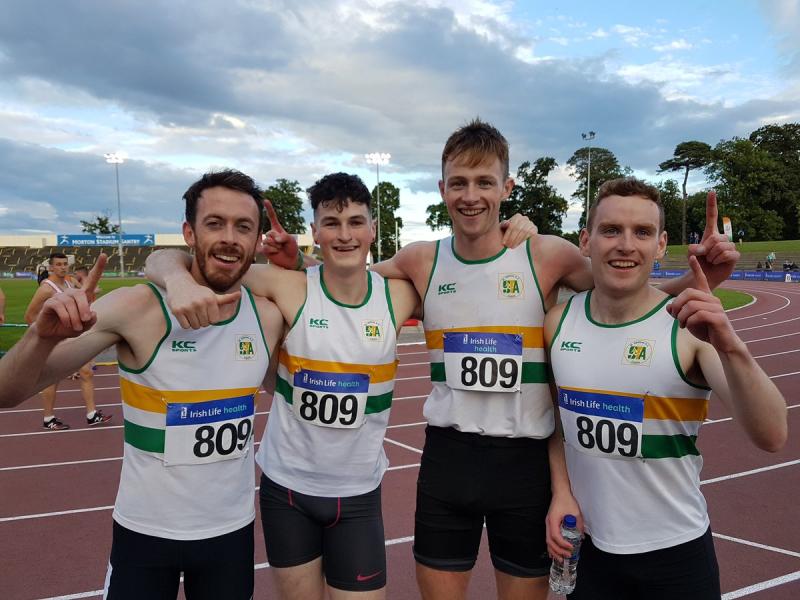 St Abban's enjoyed a hugely successful opening to the Irish Senior Track and Field Championships, which were held in the Morton Stadium over the weekend. Saragh Buggy and Cian Kelly both claimed individual gold medals, while the club's 4X400m mens relay team also claimed a gold medal. While those were the higlights of the day for St Abban's, and indeed Laois, there were plenty of superb performances across the day for Laois athletes.

Saragh Buggy brought home two individual medals, with her gold coming in the triple jump, where a leap of 12.24m saw her win comfortably. She also added a silver in the long jump, covering 5.85m.

Cian Kelly clocked a time of 8:42.50 in the Junior Mens 3000m, as he had almost four full seconds to spare over second-placed Eferm Gidey from Clonliffe Harriers. Mountmellick AC's Adam Holden also took part in that race, finishing in sixth place.

There was silver for another St Abban's athlete, as Maisy O'Sullivan ran the 800m in a time of 2:09.18 to secure second place.

Another silver medal winged its way to the rural Laois club courtesy of Paul Byrne in the 400m Hurdles, who was pipped for gold once again by Thomas Barr, with Byrne's time of 51.37 seeing him comfortably into second place.

Then came their relay gold medal winning turn, as the aforementioned Byrne joined up with Cian Kelly, Jamie Pender and Eoghan Buggy to storm to the title, finishing two seconds ahead of Emerald AC.

While those were the medal winning Laois performances, there were a number of other excellent displays by Laois athletes.
Avril Deegan, one of the rising stars in the county from Ballyroan Abbeyleix and Districts AC, qualified for 1500m final where she finished 11th. In the same race, Cheryl Nolan from St Abban's came home in 7th place in a time of 4:33.00.

In the Women's 5000m final, Portlaoise AC athlete Mary Mulhare was in the mix for a medal but eventually had to settle for a fifth place finish in a time of 16:45.72, while Cheryl Nolan sadly had to drop out of the race.

In the Women's 28lbs For Distance, Laois had two athletes competing but both just missed out on medals. Emma Daly from St Abban's came fourth with a throw of 6.15m, while Portlaoise AC's Seodhna Hoey was in 5th with a throw of 5.98m.

The other Laois athlete competing on the day was St Abban's veteran Stephen Hunter, who came 8th in the 3000m Steeplechase in a time of 10:29.56.