Imperious first half from Killeshin sees them ease past Ballylinan 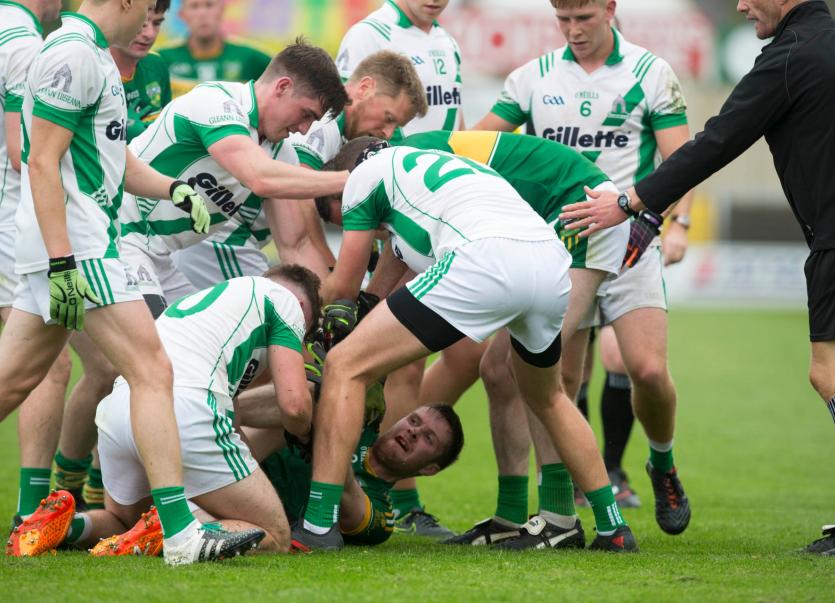 Killeshin and Ballylinan players get involved in a tussle as referee Clifford Ward tries to intervene Pic: Alf Harvey

A youthful and hungry Killeshin side improved heaps from their narrow first round victory and beat last year’s beaten county finalists, Ballylinan, with a bit to spare. A brilliant first half from Killeshin saw them lead 1-12 to 0-3 at half-time, and although Ballylinan improved after the break, Killeshin ran out seven point winners to advance to the quarters.

Brothers Evan and Eoin Lowry ran Ballylinan ragged at times, and Evan opened the scoring with a beautiful point, after he threw his man a dummy solo. Eoin Lowry added another, before the Laois county footballer scored the game’s sole goal.

Mark McDermott’s shot was hit hard and straight at Ballylinan net minder, but Eoin Lowry was there to pounce on the rebound. Killeshin certainly weren’t finished yet, as they would hold Ballylinan scoreless for twenty-seven minutes, and hit a further eight unanswered points.

Cathal Brennan slotted over a free, before Evan Lowry grabbed another outstanding point. Older brother Eoin continued the scoring spree with three more points to his name. His first was a simple one from close range, his second came after he collected a short Michael Doran free, catching Ballylinan asleep, and his third was scored after his blistering pace left the Ballylinan defence for dead.

Cathal Brennan then took hold of the scoring mantle, as he put over a free, before curling a beautiful point off the post and in. First half substitute David Aston made an instant impact with another, before Ballylinan eventually got off the mark through Liam Kealy pointing.

Ciaran Farrell added another for Ballylinan, before Killeshin replied strongly with two point themselves. David Aston looked to stake a place in the starting fifteen, as he caught Killeshin keeper’s Shane Coakley’s kick-out, ran half the field, and split the posts. Cathal Brennan placed over another free, before Ballylinan’s Ciaran Farrell landed an excellent point to end the half.

Ballylinan needed a bright start to make a game of this one, and Alan Farrell pointed quickly to eat into the half-time deficit. Evan Lowry replied with his third from play, before five minutes elapsed before the next score.

It would go to Ballylinan, as Gary Walsh, who was been excellently marshaled by the returning Laois captain Stephen Attride, placed over a free. He added another from off the ground minutes later, but there was only twenty minutes left to make up a gap of eleven points for Ballylinan.

Killeshin were putting a lot of men behind the ball now, and they caught Ballylinan out with a swift counter-attacking move resulting in Barry Ran raising a white flag.

The game was playing into Killeshin’s hands a bit with fifteen minutes left, as goals looked very unlikely for Ballylinan, despite their need for a few of them. Alan Farrell, who moved to defence and marked the dangerous Eoin Lowry after half-time, put one over the black spot to leave the difference at ten.

Cathal Brennan attempted to calm any potential storm brewing with a point, but Ballylinan weren’t giving up, as Jamie and Ciaran Farrell landed points to cut into the gap again. Gary Walsh put over another free, but time was against Ballyinan, and, along with a red card for substitute Podge Walsh, they fell to a disappointing defeat.

An unanswered period in the first half where Killeshin hit 1-10 and held Ballylinan scoreless left them with far too much to do.

A couple of calls from Clifford Ward dissatisfied the Killeshin faithful in the stand, but overall he did fine.

Killeshin have come on leaps and bounds from their slender first round victory over Clonaslee St Manmans Gaels, with Stephen Attride’s presence at the back playing no small part in that.

Although most of his teammates were poor, Ciaran Farrell did quite well for Ballylinan. He scored an unbelievable point in the second half, where he picked up the ball near the sideline and struck a beauty over from distance.