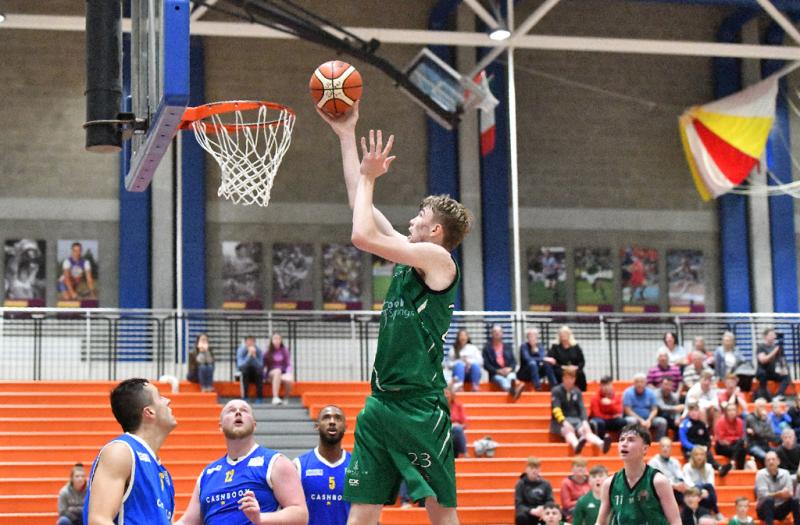 James Gormley goes to the basket for Portlaoise Panthers against UL Eagles.

Portlaoise Panthers stormed to a spectacular opening night victory against a strong University of Limerick Eagles outfit in the plush surroundings of the UL Sports Arena on Saturday night.

An extremely youthful and super exciting Panthers squad withstood an almighty final quarter barrage from the Munster men to hold out for a 81-76 win.

This years Panthers are bucking a recent trend in Irish club basketball of stacking teams with experienced imported talent in a bid for instant success by building their team around a young U-18 and U-20 core. The average age of the squad is 18 which is incredible at this level. The 7ft colossus, James Gormley returns home from High School in Alabama to add to the excitement of the story. He opened his National League account with 16pts and 19 rebounds at the weekend.

This years National League has been expanded to a record 49 teams showing the explosion of interest in basketball in Ireland again. Panthers will compete in the Division 1 Men’s and Women’s competitions this year. The ladies welcome back Irish star Claire Melia and have an exciting American player, Jamie Sherburne from Niagara University in their ranks for the season beginning in October.

The Men’s competition began a month early to accommodate the expanded format. The Men’s team have exciting point guard Mike Pierre on their books for the season. Pierre arrives from University of Southern Vermont and has the ability to electrify arenas the length and breadth of the country as evidenced by his opening salvo in Saturday night’s win in UL.

Panthers exploded from the blocks to start the game and Pierre got to work straight away. He went off for 15pts in the first quarter silencing the local crowd. Panthers full court pressure forced early turnovers from UL Eagles and Pierre and Vilimas powered Panthers to a 21-12 lead at the break.

UL settled in the second quarter and pulled the Portlaoise lead to win by the end of the half. Limerick used their experience to claw their way back to 38-39 and went to the dressing room with a smile on their faces as a half in which Panthers played the better basketball wasn’t truly reflected in the scoreline.

Vilimas kept the Midlanders ahead and Gormley started to exert his influence on the game with a couple of strong finishes just before the break. Sean Condon used his huge frame to good effect and pulled a couple of aggressive rebounds from the backboard.

Trevor Swayne entered the fray and began to poke holes in the opposing defence with his wizardry. His appearance was short lived though as he sustained a nasty ankle injury early on.

Gormley’s best work was to come in the second half as he opened the quarter the way he finished the previous one with a strong move inside the paint. He dominated the boards throughout the second half.

The livewire Gary Morrissey sprung to life in the third quarter and drained two quick three pointers to put some distance between the teams midway through the quarter. Panthers changed up their defense too as their fouls accumulated and Kyle Burke was immense on both ends of the floor during this period.

Burke would be a young gun on any other National League team but on this team his 22 years propel him to instant veteran status and his experience and guile at this level helped steady the ship as Panthers took the game to their more experienced foes.

Liam Kinsella and captain Jack Dooley brought their usual energy to the floor and Panthers streaked to a 63-49 lead after three quarters.

Portlaoise looked comfortable as they stretched their lead to 18 at the start of the fourth but things can change quickly in basketball. Two consecutive sloppy turnovers resulted in a quick six points for the Eagles and all of a sudden they sensed blood in the water.

Another long three and the lead was reduced to single digits. UL sensed panic in the youthful Panthers and pressed again. But Pierre stepped up and took control and set up Vilimas for a beautiful finish inside which was bizarrely blown for a travelling violation.

UL raced out to score again to reduce the lead to four with two minutes on the clock. Burke battled for an impossible rebound and Pierre and Morrissey scrambled to get the ball into the front court and Gormley got another important finish at the rim. Vilimas finished the Panthers scoring and Pierre dribbled out for an incredible victory for the young Portlaoise men.

This is going to be an educational season for this team. A sharp learning curve. Conventional thinking says that these lads are too young, too weak and too inexperienced to get wins in this league.

As Alan Hansen said “you can’t win anything with kids!” But there is a great energy and spirit in this team and the promise of an exciting future for the club. Basketball is booming in Ireland again and Portlaoise Panthers are right in the thick of it. Oh yeah and Alan Hansen may have been a little off with his theory!