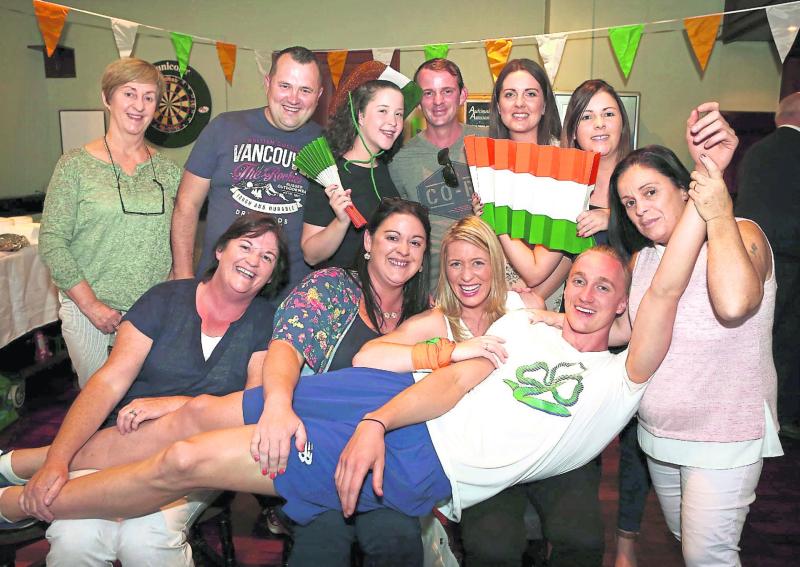 Shane Ryan with supporters at the Rio reception in 2016 at the Pint O'Port, Portarlington for the Olympic swimmer. Photo: Michael Scully .

Ireland's first World Championship swimming medalist is looking forward to spending time with his 'very, very big' Irish family on the Laois Offaly border in the run-up to the Tokyo Olympics.

The swimmer, whose dad Tom hails from Portarlington, has decided to move back to Ireland to help put the country on the medal podium in Japan in 2020.

An Irish American, Shane declared for Ireland in 2015 before Rio. He spoke to RTÉ about representing Ireland and his plans for Tokyo after claiming bronze in the 50-metre backstroke at the World Shortcourse Championships in China on Friday.

He said his Irish roots made it no problem to opt for Ireland.

"It was no sacrifice whatsoever coming to Ireland. I've always been raised as Irish. My Dad is one of 10 (siblings in his family) and he's the only one in the United States. So, I've a very, very big Irish family. I've family in Mayo and family in Portarlington. So, it wasn't much of a sacrifice. I always feel at home in Ireland.

"I'm so happy because this is a long time coming for Ireland. Because we're such a strong country. We're so powerful so now we're focusing on the sprinting. We can really do a lot of damage in Tokyo.

"We're going to be rapid. And if I get better and Conor Ferguson gets better and everyone else gets better, the mentality is going to like pushing a snowball down a hill. It's going to get bigger and bigger and no one will be able to stop it.

"I'm just glad I can get Ireland up on the board and see that flag being raised. Maybe the next time I come around, it'll be the first flag up there and the Irish national anthem being played," said Shane.

Shane broke more records in the 100-metre freestyle and with the relay team on Saturday. He is out again in another relay event on Saturday.