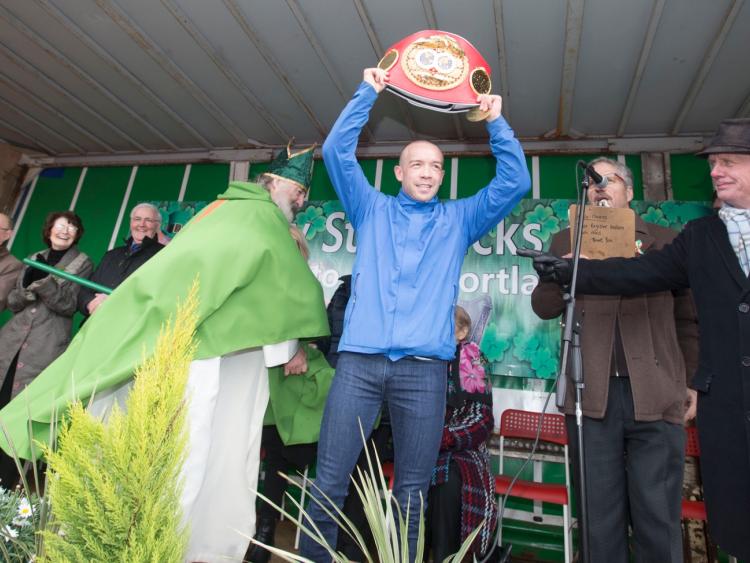 Hollywood has told the story of many boxing legends and Portlaoise's World Boxing Champion TJ Doheny says he is heading to Los Angles to fulfil his latest dream in the ring.

The Laois native's next bout is set for the famous Forum in California this week. The IBF Super Bantamweight world champion takes on Daniel Roman in a belt unification fight this Friday night April 26. The Irish man looked in great shape under the Californian sunshine at the pre match press conference.

@TjDoheny: “Once you’ve become a world champion, it’s time for you to prove that you’re the best in the division. Fans are in for a real firecracker Friday night.”#RomanDoheny #RungvisaiEstrada2 pic.twitter.com/Xbj8aow5Gx

His latest boxing match marks another chapter in his remarkable globe-trotting journey to being top of the world at his weight division. TJ, who lives not far from Bondi Beach in Sydney, made is name claiming his title in Japan but has also fought in Boston, Bangkok and New York City.

There has been talk of a professional fight at O'Moore Park GAA grounds in Portlaoise but before that he will have to overcome the WBA world champion Daniel Roman.

He spoke about his latest challenge to RTÉ.

"It’s what the fans want, it’s what the fighters want, and it’s great for professional boxing. Ultimately, you want to unify the division and cement your name at the top of the division," he said

He has no problem with being on the road.

"We both travelled to win the title in Japan so it is a kind of similar story. He is a great fighter and has a great punch selection, so he is going to bring it all.

"I have boxed in Tokyo, Sydney, Madison Square Garden in New York, and now I am about to co-headline in the Forum in LA. It is the stuff of dreams," he says.

Roman: “This is what everyone wants, the chance to unify. We’re going to steal the show.”#RomanDoheny #RungvisaiEstrada2 pic.twitter.com/KTKKpluCNV

Roman was in New York when Doheny defended his belt. The fighters agreed to fight in the ring afterwards.

"When Danny challenged me in the ring in New York, he said ‘I have got a lot of respect for you’.

"Myself and Danny are in the same mindset and it is crazy how alike we are. He is a really respectful guy so there is no point saying anything negative about him."

Doheny is unbeaten with 21 wins. Another big win could see the 32-year-old mentioned as a possible opponent for Carl Frampton or Michael Conlan.

Before that he is looking forward to his next fight.

"I am going to predict fireworks. It is not my style to make predictions but the fans can expect a good fight," he said.

TJ's opponent also sees it as a big fight.

"I grew up in Inglewood and always dreamed of fighting there," said Roman. "It is the biggest fight of my career and I am fighting in my own back yard.

"I want to fight the best. I am not here to waste time. I want to unify all the belts."

The fight is promoted by Eddie Hearn's Matchroom Boxing and will be shown live on Sky Sports.

Hungry for the unification, @TjDoheny heads to the Forum on Friday night in a bid to take Roman out, and his WBA crown home with him... #RomanDoheny @DAZN_USA @SkySports pic.twitter.com/A4IsXFDJil